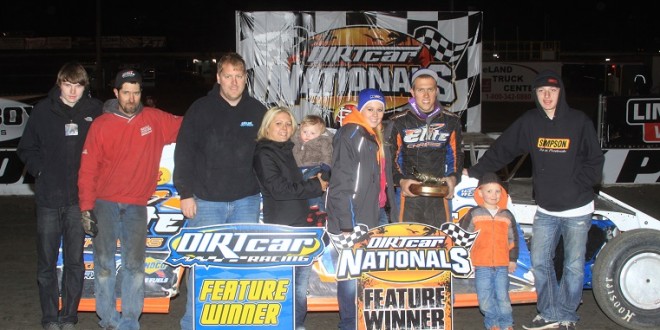 BARBERVILLE, Fla. – Feb. 14, 2015 – After narrowly missing out on victories the previous two nights, World of Outlaws Sprint Car Series champion Donny Schatz left no doubt who was in charge on Saturday at Volusia Speedway Park’s DIRTcar Nationals, sweeping to the lead on lap eight and driving to his first victory of the season.

Then, in the first qualifying night for Monday’s Gator Championship, Nick Hoffman became the fifth different DIRTcar UMP Modified winner of the week, getting the jump on Kyle Strickler after a caution-filled start to the main event.

Schatz, who drives a car owned by three-time NASCAR champion Tony Stewart and finished second to Daryn Pittman two nights in a row, changed the engine in his car before the main event, and the new 900-horsepower motor was more than enough to carry him to victory ahead of former series champions Danny Lasoski and Steve Kinser.

“We broke a valve spring in the dash with two laps to go and we did break a valve spring last night,” said Schatz, a six-time World of Outlaws champion from Fargo, N.D. “We could have taken the chance to run the engine, probably could have had a DNF, you never know. These guys decided to change it. They do a phenomenal job. They got us out for the feature. Like I said, it wasn’t pretty. We needed to make some adjustments, we just didn’t have the time. So the car wasn’t the greatest but it managed to get a win, I’m happy about it. I was really wanting a Gator [trophy].”

Hoffman had been on the podium at Volusia all but one night in the first week of action, but on Saturday night he broke through for a win with a dominating performance, holding off Kyle Strickler and Ty Dillon in the qualifying race to put himself in a prime position for Monday night’s $5,000-to-win special event for UMP Modifieds.

“The track was in my favor tonight, starting on the pole,” said Hoffman, of Mooresville, N.C. “I think the plan is take every one of these Gators back to North Carolina between me and Kyle and the Dillon boys.

“I’ve won here on the bottom and it’s been good, and that’s just what I did tonight, held it right on the bottom, make sure to hit the moisture, and that’s all she wrote. It all comes down to the pill draw. I’ve won the Gator from seventh before so it can be done from further back, but it’s going to be tough with the guys we’ve been running against, and the Dillons being so tough.”

Nightly doubleheaders at Volusia run Saturday through Feb. 21. On Saturday night the World of Outlaws Sprint Car Series continues its high-powered, high-speed action along with the DIRTcar UMP Modifieds.