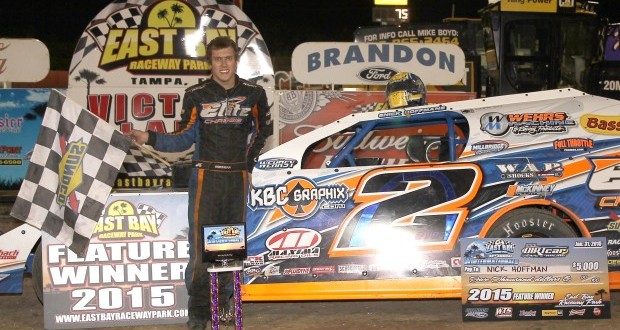 Tampa, Florida……1/31/15……..Nick Hoffman was only at East Bay Raceway Park for two of the three days of the 16th Annual Open Wheel Modified action, but the Mooresville, North Carolina youth made his presence known to the Saturday night crowd and the 42 competitors by sweeping both nights for a total of $6,500 which included the $5,000 prize and trophy for Saturday night’s 75-lap finale.

Exiting his Elite chassis in victory lane with his traditional backflip he was quick to tell the crowd that he thought he had buried himself behind the “eight-ball” when the rest of the field was lined up by points and he was a day short of those points because of missing the first night of action. He thought for a while after starting sixth in his heat, that he might have to run a B-Main, since the track was only advancing three to the A-Main, but there was an opening and he shot for it and won the heat race.

After starting seventh in the 75-lapper, with pole sitter Devin Gilpin clearly in charge, Hoffman was up to third by a lap l7 caution. He advanced to second on a restart on lap 3l where he stayed until the mandatory fuel stop on lap 44. The winner confessed, “I noticed that I had way more rubber on my tires than anyone else, and I just had to keep my car straight and get to the bottom soon.”

That move to the bottom groove came on lap 58 when he took the lead Gilpin and from there on he pulled away, winning by a margin of victory of 3.700 seconds over fourth starter Kyle Bronson and Gilpin who held on for third.
“My dad will have to do a refresh on this Pro Motor Engine after my celebration on the track. We already have this car sold, so I have to get back to the shop and build some more cars” Hoffman explained.

Brad DeYoung came up from 16th to finish fourth, while Kevin Adams had a top five finish. Rounding out the top 10 it was David Reutimann (who never gave up on the outside groove), Steve Miller, Ray Bollinger, Bill Howard and Austin Sanders.