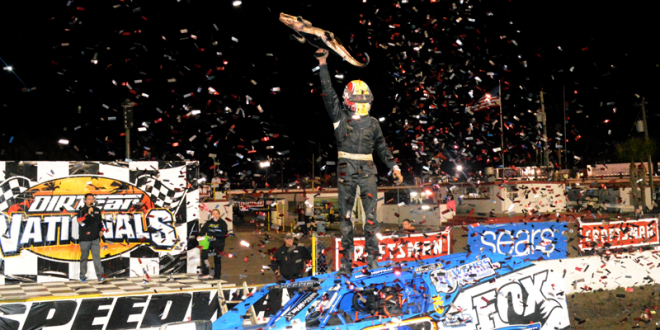 BARBERVILLE, Fla. — Feb. 15, 2016 — Nick Hoffman continued his DIRTcar Nationals dominance Monday night as he held off Austin Dillon to score the Gator Championship and the coveted ‘Big Gator’ trophy.
Hoffman drew the number one starting pill in the night’s redraw but faced stiff competition from NASCAR stars Austin and Ty Dillon, and Jason Beaulieu as the green flag flew on the night’s 30-lap feature at Volusia Speedway Park.
Hoffman jumped out to a nearly two second lead early as the Dillon brothers worked to run him down. By lap 13, Ty Dillon caught Hoffman and began a multi-lap battle for the lead. With lapped traffic in play, Hoffman was able to again extend out his lead.
As Hoffman maintained a consistent one-and-a-half-second lead over Ty Dillon, Beaulieu began battling Austin Dillon for the third position. Billy Workman Jr. slowed to a stop on the front straight on lap 27 and bunched the field back up as the yellow flag flew.
“I was kind of hoping that thing was just going to go straight to the checkered but I just didn’t want to do what Ty did the other night and screwed up in lapped traffic or miss my marks in the last two laps,” Hoffman said. “It was nail-biting coming to that green with two to go. I knew if I could make three perfect laps that that was all it was going to take.”
When the feature returned to green with three laps remaining, Hoffman held off Ty Dillon as Beaulieu battled to the third position. It was the third win of DIRTcar Nationals for Hoffman.
“I knew all of my fate relied on that redraw but man this thing was so good I think we could have won that thing from 10th,” Hoffman said. “I knew Ty would be really tough and I just held onto it and those lappers were a little scary.
Billy Moyer Jr. held off Dennis Erb Jr. and Shane Clanton to win the 30-lap DIRTcar Late Models opener.
Moyer battled past the pole-sitter early as Erb and Clanton traded the second position for much of the feature. As the laps dwindled down, Erb and Clanton pulled within striking distance of the leader who struggled to navigate lapped traffic. With 10 laps to go, the top three were separated by less than a second. As Clanton faded, Erb stayed close to Moyer but was not able to get around.
“I’ve never ran good in a feature here,” Moyer said. “I’m really excited, we finally got a Gator and that means a lot to me. The car was phenomenal, I tend to overtighten myself a lot, so it was great having my dad here to help me on the adjustments. We’ll go to work tomorrow and hopefully get another one.”
Nightly doubleheaders at Volusia run through Saturday, Feb. 20. The DIRTcar Late Models return Tuesday night as the DIRTcar UMP Modifieds takes on its final night at Volusia Speedway Park with the Triple-20s.