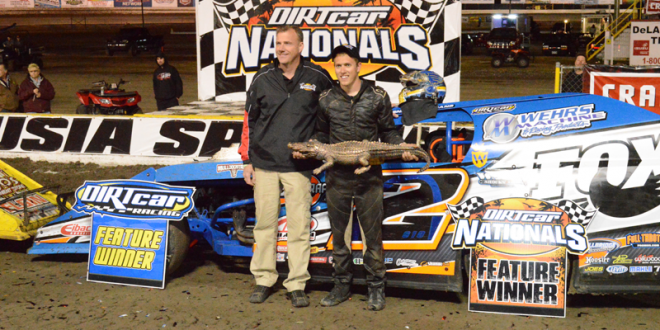 BARBERVILLE, Fla. — Feb. 16, 2016 — Nick Hoffman wrapped up his blockbuster DIRTcar Nationals run on Tuesday night as he claimed the UMP Modified Week championship and scored his second ‘Big Gator’ trophy.
Hoffman, who was the class of the field all week with the DIRTcar UMP Modifieds, picked up three wins, the Gator Championship and the overall championship. He finished sixth in the final triple-20 feature.
“I just can’t believe it,” Hoffman said. “I can’t thank everybody enough who makes this possible. It’s unreal to come down here and beat the guys we did and to do it so many times.”
Tuesday night had three Triple-20 features lined up by the UMP Modified championship week point standings. Ray Bollinger picked up the win in the final Triple-20 feature of the night after battling with Will Krup.
“I can’t say enough for my crew,” Bollinger said. “They pull it down here and I get to fly down here. I feel like a NASCAR star coming down here and I finally got my gator.”
NASCAR Xfinity Series driver Justin Allgaier won the second Triple-20 after he ran through the field and battled Scotty Kincaid. For the driver nicknamed ‘Little Gator,’ the win was even more meaningful as he was able to bring home his own little gator trophy.
“We struggled this week really bad – I can’t thank these guys enough,” Allgaier said. “We built a new racecar to come down here. We’ve been trying to learn it and we finally did tonight.”
Derrick Ramey held off Joey Jensen through the first Triple-20 feature of the night to claim his first victory of DIRTcar Nationals.
Josh Richards dominated night two with the DIRTcar Late Model Series. Through the 30-lap feature Richards held off a charging Jonathan Davenport and Tim McCreadie to score his first DIRTcar Nationals victory of the week.
“It sure wasn’t pretty but we will take it,” Richards said. “I saw [Davenport] in second and knew I had to give it all I had.
“It was touchy out there. There was a lot of traction in spots. If you could get though it smoothly, which was hard to do, then you could gain some speed. You don’t really know when you’re leading who’s behind you and how fast they’re going. It was a handful but we will take it, we have a long week to go.”
Nightly doubleheaders at Volusia run through Saturday, Feb. 20. The Super DIRTcar Series Big-Block Modifieds take on Volusia Speedway Park Wednesday night as the DIRTcar Late Models crown the Swamp King Champion.
For more information and updates on the DIRTcar Nationals, click DIRTcarNationals.com or follow on Twitter at @DIRTcarNats.