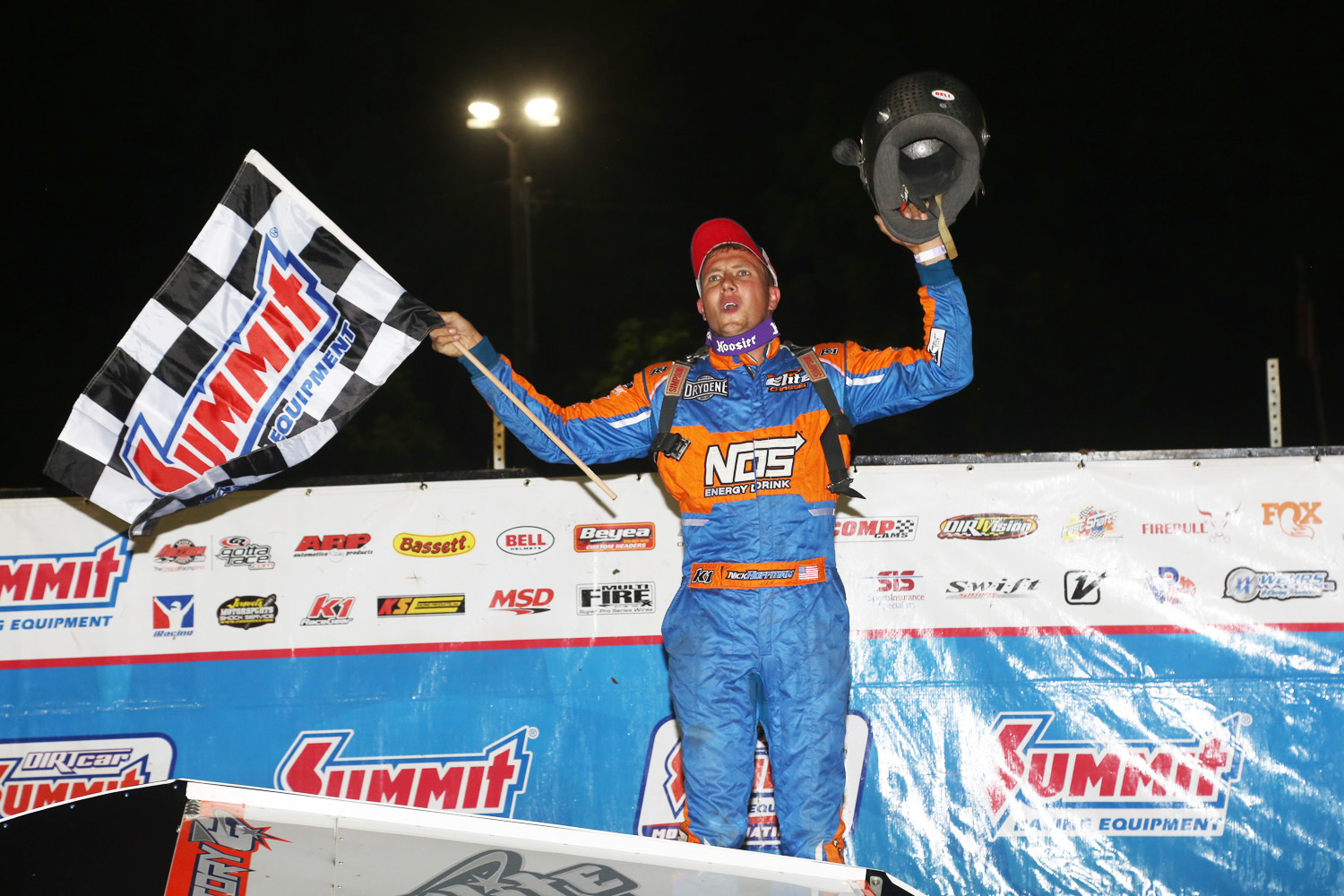 NO SPRING, NO PROBLEM: Hoffman Wins Highland with Broken Suspension

Break one of his shocks, throw away a spring, even put a national champion right on his tail for the entire race. But it seems not even that kind of pressure combined can crack Nick Hoffman.

The four-time and defending DIRTcar Summit Racing Equipment Modified Nationals champion was thrown into one of his biggest predicaments of the season Saturday night at Highland Speedway when his left-rear shock broke while leading, sending the spring flying onto the track, leaving him to race the final 14 laps of the Feature without the essential suspension components.

Much to the surprise of his doubters and jubilation of his supporters packing the Highland grandstands, Hoffman pulled through, holding off six-time Summit Modified champ Mike Harrison at his home track to score his 11th tour victory of the season.

In Victory Lane, Hoffman emerged from his NOS Energy Drink / Elite Chassis #2 to a shower of mixed cheers and boos – an indication of the energetic crowd gathered at the weekly venue for one of their biggest races of the season.

“When I got out of the car, I think that’s definitely the loudest crowd I’ve ever had in any type of racing, for sure,” Hoffman said. “It’s pretty badass.

“Didn’t really expect that many cheers, but we’ll take it.”

Taking the green from the outside pole, Hoffman jumped out to a sizable advantage over Harrison in the opening laps but quickly felt something had gone amiss going down the straightaways.

“It was like you were running down the straightaways sitting on a ladder, and somebody would just kick the ladder out from under you when you got to the corner,” Hoffman said. “It would slam down so hard and make it so hard to drive on entry.

“I could feel the shock actually dragging on the ground. You could hear it clicking back-and-forth back there, and I knew that was whatever was left of the shock shaft still hitting the ground.”

An extended caution period brought the field to a temporary halt on Lap 12 while the track crew cleaned-up an incident in Turn 2. Shortly thereafter, the entire left-rear corner of Hoffman’s car hiked-up and refused to settle for the duration of the race.

“Finally, I got lucky enough that it actually canned the birdcage over and hung the rods where it couldn’t sit back down,” Hoffman said. “Once it did that, it didn’t have near as much grip that way, like it was just so bound-up, but at least it didn’t slam back down.”

With of his mechanical issues, 14 laps still remained on the scoreboard. But those problems didn’t seem to matter. Hoffman never once seemed to falter, driving away from Harrison and the rest of the field slightly en route to his 68th career Summit Modified victory.

The Summit Modifieds are back in action to cap-off Illinois-Indiana Week Sunday night, July 10, at Tri-State Speedway in Haubstadt, IN. If you can’t be at the track, watch every lap live on DIRTVision.