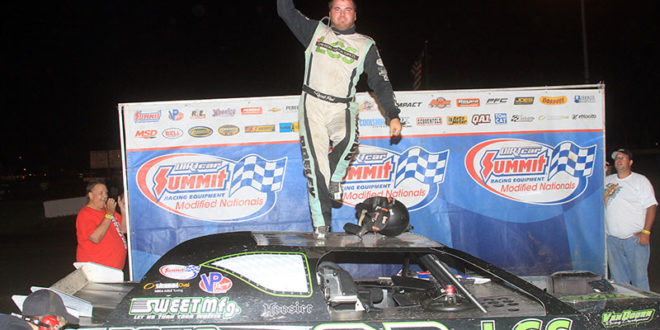 Nick Hoffman, of Mooresville, NC, and Mike Harrison occupied the front row, with Jacob Poel starting right behind them in the third position. Hoffman and Harrison battled for the lead on the opening lap, with Harrison eventually securing the top spot.

Harrison had the car to beat as he held off challenges from Hoffman, Poel, and T.D Burger in the early laps of the 25-lap feature event. Harrison built a comfortable lead on the rest of the field with the action heating up for the second position where Poel, Hoffman and Burger battled for the majority of the race. Harrison looked to close out the weekend with back-to-back victories, but a late-race caution with four laps remaining changed that outcome.

On the final restart, the leader kept his car glued to the bottom, holding off a challenge from Burger. Poel took advantage of the front two cars battling for the lead, as he made his move to the outside lane and powered around Burger for second with three laps remaining. Poel drove his car deeper and deeper into the corners trying to catch Harrison, finally getting to his outside going into turn one on the final lap.

Harrison edged Poel heading into the final turn, but the outside line would prove to be valuable for Poel as he pulled even with Harrison exiting turn four. The two drivers hit the front stretch nose-to-nose with Poel claiming the $1,000 checkered flag in the first photo finish of the 2014 DIRTcar Summit Racing Equipment Modified Nationals season.

“I was really just trying to put a show on,” said Poel who won by .05 of a second. “I didn’t even know or not if I won there at the end, it was so close. They must’ve had to go back to the transponders.”

Burger, Hoffman, and Jeff Curl rounded out the top five.