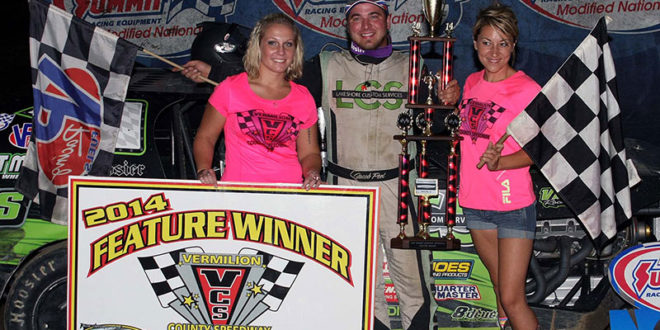 22 Summit Racing Equipment Modifieds roared into the 3/8-mile oval located in western Illinois, near the state-line with Indiana, with championship leader Mike Harrison capturing the pole for the 25-lap feature event.

Harrison failed to lead a single lap as second-place starter Randy Lines jumped out to an early lead. Harrison came under fire from Nick Allen and Jacob Poel for second early as the three battled side-by-side, and even three-wide at one time, with Allen and Poel eventually sliding past Harrison for the position.

Lines led the opening six laps, but fell back to third on lap seven when a hard-charging Allen quickly chased him down and rocketed past him for the lead, bringing Poel with him. Lines continued to drop back through the field as the race progressed, eventually settling for a sixth place finish by the time the checkered flag flew.

Allen controlled the top spot over Poel for the next four laps, but had trouble holding off the red-hot driver from Michigan. Poel, utilizing the faster high-side of the race track, made his way to the leaders outside and eventually cleared Allen to claim the top spot on lap 10.

Poel navigated lap traffic and built a large lead by the end of the feature event, as he easily dominated the final 16-laps en route to capturing his series-leading seventh $1,000 checkered flag of the season at Vermilion County Speedway.

In whats shaping up to be the tightest points battle in series history, Jacob Poel cut into defending champion Mike Harrisons 11-point lead he had coming into the night, after Poel captured the victory and Harrison settled for a fifth place finish.

Following a two-day break in action, the DIRTcar Summit Racing Equipment Modified Nationals joins the DIRTcar Summer Nationals at Atomic Speedway in Chillicothe, Ohio, as both tours kick off their final stretch of action before championship night at Oakeshade Raceway on July 19.