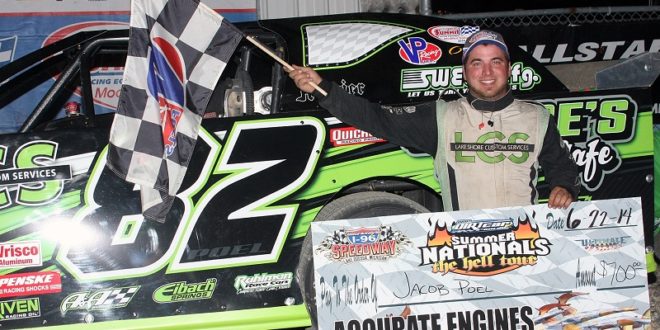 Sunday consisted of two local stars, Poel of Spring Lake, Mich., and Chad Bauer, of Farewell, Mich., battling for the top spot early. Bauer secured the lead at the drop of the green-flag and led the opening four laps of the 25-lap main event, before Poel powered around him on lap 5.

Poel was too fast for Bauer to handle as he stretched out to a 2.15-second lead by the end of the race. Bauer’s car dropped back through the field after losing second to Travis Stemler, resulting in an eighth place finish. Poel led the remaining 21 laps en route to capturing the $1,000 checkered flag, his third in just two weeks of the six week-long tour.