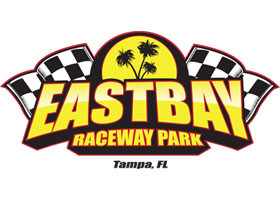 Tampa, FL — ”The first half of the race, was the scariest I have every been in a race car,” confessed Rodney Wing after he accomplished his ultimate goal Saturday night at East Bay Raceway Park, winning the 10th Annual Open Wheel Modified Winternationals 75-lap finale worth $8,000.

“For one thing, when I was following the leader Rob Fuqua, he started smoking on lap 13. The oil or water that he was throwing back on my shield, made me use up all my tear-offs and I couldn’t see a thing. I was completely out of tear-offs when he finally blew in turn three,” explained Wing.

The yellow was out as Fuqua coasted to the infield on the front stretch after 34 laps. The timing was right and Race Director, Todd Hutto, used the pause in the action to throw the red flag for a mandatory fuel stop.

This gave Wing’s two crewmen a chance to give him a fresh supply of tear-offs and he was good to go when the green replaced the red and he inherited the lead.

Wing, the Whynot Motorsports Park track owner, led to the finish, despite constant pressure from Kevin Weaver. “I knew Weaver had a softer right rear tire

And would try the bottom. I had better grip on the top because I had harder tires. I really appreciate the fact that Kevin drove me clean,” said Wing, who now became the tenth different winner in the event that has never has had a repeat winner.

For a fellow who had never seen East Bay before this week, it quickly has become Wing’s favorite track. His House of Hook chassis is owned by “Corky” Garrett out of Jackson MS, and sponsored by Marble Enterprises, Franklin Paving and Tony Baker Racing Engines. His Florida crew includes William, “Hollywood” and Mike Vaughn.

Fifty-four cars were on hand and the points they had earned the previous days determined the line up for eight heats. The top six in points were locked into the A-Main and the re-draw for starting spots was done on the front stretch using numbered stuffed bears holding heart-shaped treats in honor of Valentine’s Day.

This put Weaver and Fuqua in the front row for the feature with Ray Guss, Jr. and Jared Landers in row two followed by Scott Drake and Wing. The eight heat winners lined up next, followed by the B-Main transfers and last year’s Champion Louie Krushansky and East Bay’s highest point man that did not qualify, Scotty Williams, were added as Provisionals to complete the 24 car field.

Fuqua’s outside line propelled him into the lead and Weaver held second spot for two laps before Wing moved by to claim second. The first caution on lap 10 just as the leaders were closing on the back of the field, showed the same trio followed by Landers, Guss and Brady Short.

After a multiple car tangle on lap 12, the smoke started pouring from the back of Fuqua’s mount. Despite all the smoke, he held off the challenges of Wing and Weaver until his engine expired on lap 33.

Following the fuel break, Wing led Weaver, Guss and Gary Cook, Jr. up to the 50-lap mark. Four laps later, Weaver threatened Wing on the inside, but as they got into lapped traffic, Wing made all the right moves and a two second lead on Weaver by lap 60.

Three quick yellows for minor spins came out on laps 64, 66 and 67. This put Wing and Weaver nose to tail, but at this point Weaver, who had paced himself in his Bob Pierce chassis sponsored by Jimmy John’s Gourmet Sandwiches, had used up a tire and was slowing down. The soft-spoken Weaver has made every Open Wheel Modified Winternationals A-Main event, except one year when he didn’t come to Florida.

Weaver earned $3,000 for his solid second place finish over Ray Guss, Jr., who was pleased with his Jared Landers car. “For a brand new, “out of the box” deal, we are real pleased,” said Guss. “We only had to make slight adjustments and of course, we have to learn more about the car. I was losing the right-rear brake and it was fading at the end,” said the third place finisher.

Jared Landers landed fourth spot driving his own Shaw by Landers NO. 777. He came to East Bay with five Florida wins and a Championship at Volusia. The car is sponsored by Bad Boy Mowers and Mark Martin Ford & Chevy Dealerships out of Batesville, Arkansas. Additional sponsors are OCPI, Boater Sports, Larry Shaw Race Cars, Rock Hard Powder Coating and AWE Avenue West Express. New Vision Graphics are visible on his car that is powered by a Mullins Racing Engine.