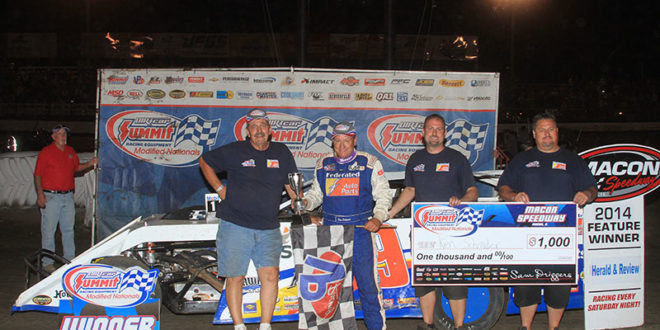 Cory Daughtery claimed the pole-position for the 25-lap feature event with points leader Mike Harrison starting to his outside. Daughtery slid out to an early lead as second place Harrison came under fire from Jeff Curl and Ken Schrader, who started in the row behind the leaders.

Daughtery led a race-high 13 laps but the tight, 1/5-mile dirt oval provided close racing all night long, keeping any one driver from dominating the feature event. With slower traffic starting to cause an issue, second-place Jeff Curl reeled in the leader with ease and quickly jumped to his outside. On lap 14, after a few laps of side-by-side battling, Curl managed to slip around Daughtery for the lead and brought Schrader with him.

Curl led the next eight laps, but slower lapped traffic caused problems for the leaders again, this time striking Curl on lap 22 who was stuck behind two slower drivers battling for position. Second-place Ken Schrader, seizing the opportunity, dove to Curls inside as the leader became blocked behind a slower car, allowing Schrader to slide into the lead.

We just got rolling around the middle, said Schrader, who tested a USAC Silver Crown car in Indianapolis for NASCAR Sprint Cup Series star Tony Stewart earlier in the day. We got to second and then lapped traffic worked out for us, so we just got lucky there.

Jeff Leka, Harrison and Daughtery rounded out the top five.