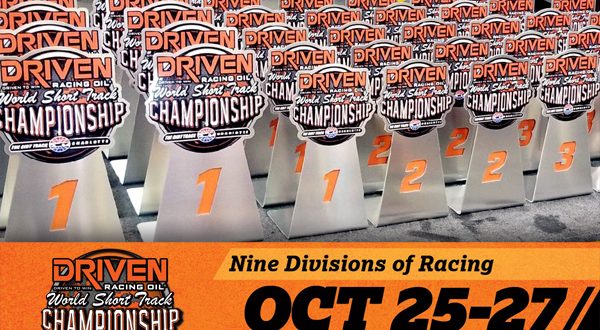 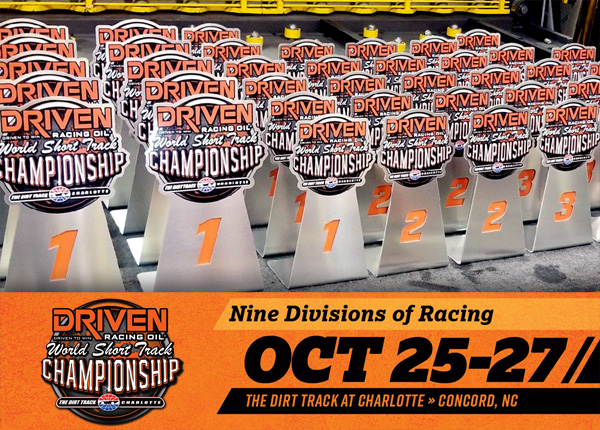 CONCORD, NC — Oct. 22, 2018 — DIRTcar Racing is pleased to announce a host of great sponsors for the Driven Racing Oil World Short Track Championship this week, Thursday, October 25 through Saturday, October 27, at The Dirt Track at Charlotte. In addition to a purse in excess of $120,000, numerous contingency and special awards will grant drivers more opportunities to go home winners, with a little extra something in hand.

The winners across each division will take home their cash prize of up to $4,000, along with a Driven World Short Track Championship trophy and a RaceQuip PRO15 Helmet, courtesy of RaceQuip.

DRIVEN Racing Oil, the title sponsor of the event, is also sponsoring the Crate Sportsman division, as well as a $500 Driven racing Oil product certificate for the fifth-place finisher and $250 for 12th in Saturday’s feature across all divisions.

FOX Racing SHOX will sponsor the Pro Late Models, as well as a $150 Fox Shocks product certificate for the fourth-, 11th-, and 18th-place finishers in the feature of all divisions, and Hard Charger awards for all but the Hornets.

VP Racing Fuels is sponsoring the Sportsman Modifieds, as well as a VP Racing Fuel jug to the sixth-, 13th-, and 20th-place winners of the feature in all divisions.

DIRTVision — which will bring each lap of the Driven World Short Track Championship right into your living room if you can’t be there in person — is sponsoring the Hornets and offering every competing driver a 28-day 2019 World of Outlaws Sprint Car FAST PASS subscription, so they can watch for free.

Arizona Sports Shirts will provide a Gotta Race apparel package to the second-, ninth-, and 16th-place finishers in the feature of divisions.

And NGK Spark Plugs, the official spark plug of the Driven World Short Track Championship, will provide a set of spark plugs to the eighth-, 15th, and 22nd-place finishers in the feature of all divisions.

In addition to the above prizes, sponsor prize packages will be award for the Longest Tow and the Sportsman of the Year.

The Driven World Short Track Championship kicks off two incredible weeks of racing this Thursday, bringing the best weekly racers in the country — across nine divisions — to the big stage at The Dirt Track at Charlotte Motor Speedway just one week before the World of Outlaws World Finals presented by Can-Am on November 1-3.

Three-day event Pit Passes are $75 for DIRTcar members and $90 for non-members. Two-day general grandstand admission (Friday and Saturday) will be $55 for adults. Children 13 and under get in free. Single-day general admission will also be available. Tickets will be sold at the track only, during the days of the event. Camping at the Charlotte Motor Speedway campground can be reserved in advance by contacting the Speedway’s camping office at 1-800-455-FANS.