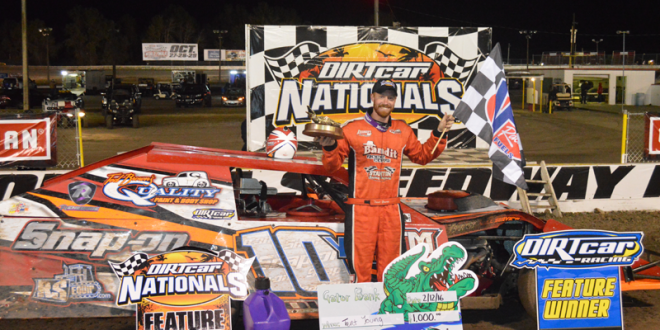 BARBERVILLE, Fla. — Feb. 12, 2016 — In front of one of the largest crowds in DIRTcar Nationals history, Kasey Kahne Racing’s Brad Sweet and Daryn Pittman fought a pitched battle for the season opening World of Outlaws Craftsman® Sprint Car Series feature on Friday night. When the checkered flag fell, it was Sweet who took the win.
Sweet and Pittman started side-by-side in the 30-lap main event at Volusia Speedway Park. The two teammates traded the lead through the opening laps of the night’s event as reigning series champion and the previous night’s winner, Donny Schatz, battled through the field.
By the midway point of the feature Schatz had moved into second and was challenging Pittman for the lead when his night was cut short by an engine failure on lap 21. It was his first did-not-finish result in 178 World of Outlaws features – a streak that stretched back to September, 2013.
Through the closing laps of the feature, Pittman and Sweet battled for the lead through lapped traffic with Sweet making a last lap pass of Pittman for the win.
“I’ll tell you what, we definitely needed that lap traffic,” Sweet said. “Daryn did a great job, you know. It’s pretty awesome for Kasey Kahne Racing to be battling for first and second. I know what it’s like to lose on the last lap. I’ve won some like that; I’ve lost some like that. Hats off to those guys, they did a great job all night.”
In the 20-lap DIRTcar UMP Modified feature, Trent Young held off a hard-charging Nick Hoffman to score his first ever DIRTcar Nationals victory.
A wreck between the top two cars, A.J. Fike and Dave Jamison, midway through the feature put Young in the lead. Hoffman battled his way into second and tried to close the gap in the final laps, but Young held firm.
“It feels amazing. This is a dream come true,” Young said. “I was pretty content just riding in third. I was going to be happy with that if the race went like it was. I got lucky to make it through that wreck. I don’t want to win one like that, but I wanted one here so I’ll take it any way I can get it. I hate that that happened to Fike. I really couldn’t see what happened but I know it was pretty nasty, and I got lucky to make it through it.”
Nightly doubleheaders at Volusia run through Saturday, Feb. 20. The World of Outlaws Craftsman Sprint Car Series takes on its second night at DIRTcar Nationals on Saturday and the DIRTcar UMP Modifieds return for night five of DIRTcar Nationals.