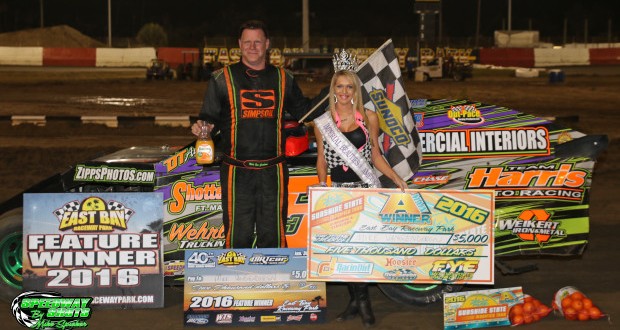 Reutimann and Kevin “Buzzy” Adams lined up on the front row for the 75 lap, $5,000-to-win A-main as Mavrick Varnadore and Trent Young sat in row two. Reutimann beat Adams into turn one and pulled out to the early lead. Varnadore settled into the third spot as Friday night’s podium once again held the top three positions. Adams kept up with Reutimann’s blistering pace in the early running and made the pass for the lead on lap seven. It looked as through the four-time and defending WISSOTA national champion was destined for another SSMT victory. Following a lap 15 restart, however, Adams drove his RealTruck.com #40 to the low side of turn number one and looped his car right in front of the field.

As a result Reutimann inherited the lead once again as B-main winner Mike Van Genderen lined up right behind him in second from the 22nd starting position. The green flag flew and a great battle between Reutimann’s open motor and Van Genderen’s crate engine ensued. The two drivers swapped the lead back and forth for the next eight circuits. Van Genderen stayed loyal on the low side of the speedway while Reutimann banged the cushion upstairs. On lap 30 Van Genderen took the lead for good as Dyersburg, Tennessee’s Preset Seratt battled Reutimann for second.

Reutimann’s night came to an end on lap 35 when the powerplant on his Beak Built #00D expired down the backstretch, bringing out the caution. With five laps remaining before the mandatory fuel stop, Devin Dixon came from the 19th position and showed his muscle to challenged Van Genderen for the point. At the completion of lap 40 Dixon led Van Genderen to the line by a mere three-one-thousandths of a second as the race took a brief intermission.

Rockin’ Ronny Luckock displayed the green flag as Dixon and Van Genderen paced the field to kick off the final 35 laps. Once again Van Genderen ran the bottom of the race track, which seemed to get a lot rougher as the race wore on, as Dixon had his deuce wound up along the cushion.

Van Genderen, running “the little crate that could” mustered past Dixon on lap 43 and took a lead that he would not relinquish. Despite valiant efforts from 12th place starter, Seratt, 14th place starter Kenny Wallace, 16th starter Rodney Wing, and Tait Davenport, Van Genderen proved that he was the class of the field and backed up his B-main win by taking the checkers and the $5,000 check that went along with it. Wing, Seratt, Trent Young, and 23rd place starter Lucas Lee rounded out the top five.

“This is the biggest win of my career,” said an elated Van Genderen in victory lane. “I’ve never been to East Bay before in my life, this is awesome. I’ve been getting text messages all week saying, ‘What are you doing bringing a Hornet to a UMP show?’, but the little motor is what we needed on this type of night.”