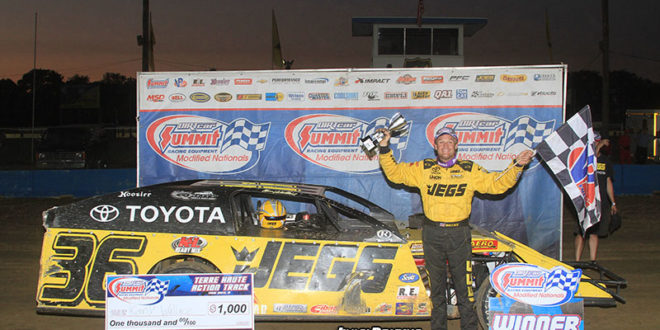 Wallace, of Concord, N.C., started from the pole-position in the 20-lap feature event with NASCAR Sprint Cup Series regular Justin Allgaier joining him on the outside of the front row. Allgaier slipped out to an early lead on Wallace as he controlled the first eight circuits.

The leader extended his advantage on Wallace who held off challenges from Tuesday night winner Devin Gilpin and Jacob Poel. Unfortunately for Allgaier his car started to fade just before halfway, allowing Wallace and Poel to catch and pass him before his engine finally let go a few laps later, resulting in a disappointing 12th place finish.

Wallace took control of the top spot on lap nine and never looked back as he held off challenges from Poel but never lost the lead, eventually defeating the second place driver by over a straightaway. Wallace dominated the remaining 12 laps, securing his first victory of the season with only seven races remaining in the six-week long DIRTcar Summit Racing Equipment Modified Nationals 2014 season.

Weve been busting our [back sides] running back and forth to Fox Sports 1 every Sunday, said Wallace speaking of his day job hosting NASCAR pre-race shows. All week Ive been running this dirt car and Ive been crushed we havent won a Summer Nationals race.