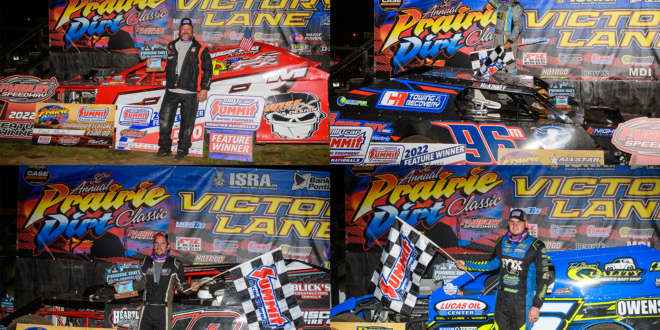 Any other driver not yet qualified for the Modified Prairie Dirt Classic Feature will compete in one of two Last Chance Showdown events on Saturday evening, from which the top-two finishers will transfer into the main event, followed by four provisional starters to make up the remainder of the 24-car field.

Saturday’s events begin with a round of Hot Laps, followed by the redraw for the top-2 transfers from each of the Showdown Features. Tickets are available at the gate, but if you can’t be there in person, watch all the action live on DIRTVision.

In short, Marshall was dominant, winning the caution-free 20-lapper unchallenged in nine minutes and fifteen seconds. He took off at the drop of the green and crossed the stripe with a gap of nearly eight seconds over runner-up Chase Holland.

Marshall, of Valparaiso, IN, put on a clinic in traffic, whizzing past the slower cars in multiple lanes at a blazing pace.

“I may have taken a few less chances had I known I had that lead,” Marshall said. “I didn’t realize I had that lead until I got back to the trailer; I thought that was Curt Spalding right next to me at the finish line, I thought I beat him by half a car.”

In his eyes, a smooth and hammer-down racetrack was just what he was looking for to bag his second career Summit Modified Feature win and get into the redraw on Saturday.

“We got a perfect racetrack as the first race out, smooth and tacky, a little bit slick at first then it tacked-up,” Marshall said. “Soft tires worked out nice, and everything fell into place.”

Showdown Feature #2 – Mike McKinney
In what was the most action-packed Modified Showdown of the night, Mike McKinney emerged victorious after putting a last-lap pass on Brian Shaw in Turn 4 to seal the win.

McKinney trailed Shaw for 19 laps around the quarter-mile of Fairbury, digging harder each lap to try and find a way around the #1s.

“Dad said we had some room, so just started searching around trying to find a line to get by him,” McKinney said. “I knew that getting under him or above him on entry wasn’t going to be the ticket, so I started opening-up my entry super high into Turn 3. I’d enter on the top and turn it down the hill to try and beat him down the straightaway.”

A few laps of the new strategy, and McKinney found himself on the rear bumper of Shaw. He got a big run out of Turn 4 coming to the white flag and threw it into Turn 1 under Shaw. With the #96M right at his door panel, Shaw slid up the track in Turns 1-2, creating the lane McKinney needed to get by.

McKinney, of Plainfield, IL, kept it low in Turns 3-4 and held off Shaw for his 15th career Summit Modified Feature win, and first-ever in the Prairie Dirt Classic.

“That was definitely the hardest I’ve ever worked for $500, but it was awesome to win in front of these fans and have ‘em all cheer when I got out,” McKinney said. “This is a race I want really bad. We’ve accomplished a lot here, and this is the last thing on my list.”

Though he’s competed at Fairbury several times in the past, Friday was his first PDC appearance – one which he won right up on the well-noted Fairbury cushion. But it took getting past Allen Weisser in the opening laps, which he did on Lap 4 with a great run off the top of Turn 4.

“Once we got rolling, the car was good and the tires got warmed-up a little bit,” Long said. “Got my momentum going, was able to get back to the lead and held on for the rest.”

Long, of Fowler, IL, led the rest of the way to collect his sixth career Summit Modified Feature win.

Showdown Feature #4 – Tyler Nicely
He missed Prairie Dirt Showdown Victory Lane last year by one spot. This year, Tyler Nicely was not going to be denied.

“Ever since I got back in this Elite [Chassis] car, it fits me and I’m a lot more comfortable,” Nicely said. “I knew tonight we needed a good Qualifying effort, and that put us up front. We’ll get to that redraw tomorrow and hopefully we’ll be on that stage by the end of the night.”

Nicely, the 2015 PDC finale winner from Owensboro, KY, hasn’t seen PDC Victory Lane since 2019 when he won a Showdown. Friday’s Feature showed what he and the car have can do, which he’ll use again Saturday in pursuit of a $5,000 check.