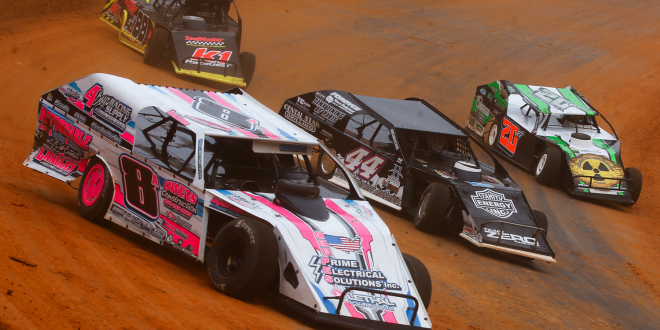 WHAT TO WATCH FOR: Past Experience, Revived Equipment Set to Carry UMP Modified Stars in Bristol Bash

The DIRTcar UMP Modified stars are some of the most talented innovators, fabricators and wheelmen in weekly dirt racing, and they’re headed for the iconic Bristol Motor Speedway this weekend.

The UMP Modifieds are set to join the World of Outlaws Morton Buildings Late Model Series at Bristol’s dirt-covered high-banks Thursday to Saturday, April 8-10, in the inaugural Bristol Bash.

An evening of practice will kick off the on-track activity Thursday night from 6-9pm (ET). Those not in attendance can watch the special pre-race presentation, FREE to all account holders on DIRTVision, also broadcasted on Facebook Live and YouTube Live.

The UMP Modifieds will run two complete racing programs with a 20-lap Feature on both nights – $5,000-to-win on Friday and $10,000-to-win on Saturday.

Stream the action live all weekend on DIRTVision presented by Drydene with a FAST PASS subscription of $39/month or a Platinum FAST PASS for $299/year.

BLAST FROM THE PAST: Two-time and defending DIRTcar UMP Modified national points champion Nick Hoffman, proprietor of Elite Chassis, will unveil his latest technical assembly this weekend – a restored and race-ready version of Elite Chassis #001, powered by a Chevrolet SB2 engine.

Upon the foundation of Elite Chassis in 2012, Hoffman took his first-ever creation from the tubing rack to the hallowed grounds of Eldora Speedway in just 17 days. A grand total of 137 UMP Modifieds entered the 18th annual DIRTcar Fall Nationals, and Hoffman beat every single one of them en route to his first-ever victory in his first career Feature start at Eldora.

Up until then, Hoffman had never even qualified for a Feature event at the Western Ohio half-mile. That weekend, he set Quick Time, won his Heat Race and the Feature.

“After that, my chassis company exploded really fast,” Hoffman said.

Over the next several years, an estimated 120-plus races were run on the chassis, mostly by Hoffman himself. Close friend and current Super DIRTcar Series Big Block Modified star Max McLaughlin also won his first career race on dirt piloting Elite #001.

Hoffman brought the bare frame out from storage a few years ago and has since been hard at work with its restoration and assembly for the Bristol Bash. Its body panels will also don the car’s original color/design scheme from 2012 – big shooting-star ‘E’ logo and all.

“I always wanted to restore this thing exactly how I ran it at Eldora in 2012,” Hoffman said. “Just to put it back together and put it back in my shop one day. It’s something to talk about and be cool in there.”

For the big half-mile of Bristol, Hoffman’s strapping in an engine those high banks know all too well – the Chevrolet SB2. The SB2 was a NASCAR Cup Series standard for several years in the 2000s, and when Hoffman acquired one several years after it was replaced in the Cup Series, he knew he’d only break it out at a place worthy of such horsepower.

“I never run it, just because it’s not ideal for most places that we go,” Hoffman said. “It makes too much power, and it doesn’t make any low-end power. With Bristol, we’re not gonna have that issue.”

DOUBLE DUTY: Kyle Strickler, the current World of Outlaws Morton Buildings Late Model Series point leader, will also be behind the wheel of his Longhorn by Loenbro UMP Modified this weekend, chasing his third Feature win in a Modified at the facility.

Strickler reached Victory Lane twice in the Bristol Dirt Nationals three weeks ago, winning both his preliminary night Feature and the finale on Saturday night. His trip to Victory Lane on Saturday was a wild journey, having to fly from racing his Late Model in Brownstown, IN, back to Bristol all in one night just to make it in time.

Loenbro Motorsports proprietors Jon and Paul Leach had taken their private plane out to Bristol to watch their longtime driver Steve Arpin compete in his own Modified. When Strickler’s Late Model race was canceled mid-program Saturday night, their plan to get Strickler back to Bristol was already in place and ready to go.

“The plane was there, and Steve suggested that if I was in Brownstown and something happened where we thought we could make it, they could send the plane out to pick me up and get me to come back. It all worked out,” Strickler said.

Strickler landed at a nearby airport and arrived at the track within minutes of his Modified Feature, still in the racing suit he wore driving the Late Model. When the green flag dropped, Strickler took off from the pole and led every lap, sweeping the weekend in Modified action.

“Once we got to the racetrack, we just made two small adjustments and the car was really good. It was the best it was all week, actually,” Strickler said.

Although he had previously tested at the Eastern Tennessee facility with his Late Model, Strickler had yet to turn laps in his own Modified prior to that race week. Now, he’ll take on both vehicle styles in a single weekend with the potential to capture $15,000 with the Modified and $35,000 with the Late Model.

BACK FOR MORE: Not many drivers in the pit area this weekend can say they’ve competed on both the asphalt and dirt in the same course at Bristol Motor Speedway. Steve Arpin can.

In 2013, Arpin competed in a Rallycross event at the facility on a makeshift course that included both dirt sections, asphalt sections and even a tabletop jump. While the Bristol Bash will be significantly different from that kind of race, Arpin said his previous experience driving at speed on the banking has accelerated the learning curve for him a bit.

Arpin also spent some time in the NASCAR ranks before starting his Rallycross career, and while he never made an appearance with NASCAR at Bristol, he said he was able to take one big thing away from his starts on other NASCAR tracks that will apply when he hits the dirt again.

“I think one of the things that caught a lot of people off-guard – and this is something that the NASCAR experience helped me transition to relatively quick – it’s how narrow those tracks are,” Arpin said.

“NASCAR tracks on TV look like one thing, but when you get up to speed on them, they’re extremely narrow compared to a dirt track.”

This isn’t Arpin’s first rodeo on the new Bristol dirt, either. He was part of the initial test session after the dirt was first laid down several weeks ago and also competed with several other Bristol Bash roster drivers in the Bristol Dirt Nationals.

It was an up-and-down kind of weekend for him, with more ups than downs. After finishing second in his preliminary Feature on Tuesday, Arpin took to the track on Wednesday for a race and was battling for the lead when he hit one of the dirt mounds on the apron, sending him around and into the wall, heavily damaging the rear-end of the car.

Arpin and the team immediately loaded-up and headed back to the Loenbro shop in China Grove, NC, to repair the damage. They got the car turned around in approximately 30 hours and headed back to Bristol with one shot at making the finale ahead of them.

Arpin started 17th in his last-chance event and put on an incredible display of speed and car control as he zoomed all the way up to second before the checkered flag, qualifying him for the main event, where he placed 9th on Saturday night. For his abilities in the seat, Arpin gives even more credit to his Loenbro Motorsports team for the quick turnaround on the car in the shop.

“It really got to showcase how talented a group of guys I have working on my team,” Arpin said. “Not that that’s the way I wanted them to get publicity, but for them to be able to showcase their talents and what they’re capable of was a pretty cool thing.”

ASPHALT ARMY: A strong host of former and present NASCAR talent is gearing up to hit the dirt with the UMP Modifieds this weekend as well.

Catch all 44 of DIRTcar’s brightest UMP Modified stars in-action this weekend at Bristol Motor Speedway. If you can’t make it to the track, catch all the action live on DIRTVision.