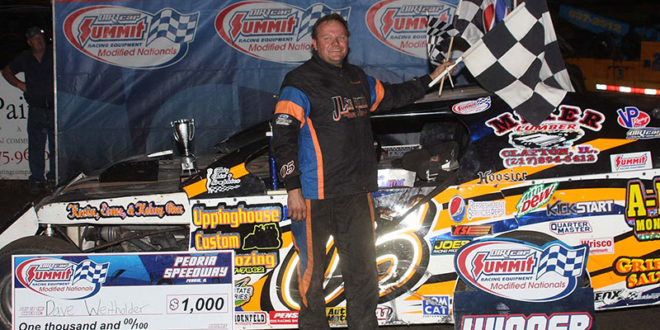 Wietholder, whose last DIRTcar Summit Racing Equipment Modified Nationals victory came almost one year ago on July 3 at Jacksonville Speedway, started the race on the outside of pole-sitter Jeff Curl, who led the opening two laps of the 25-lap feature and looked as if he would be able to make-up points on championship leader Jacob Poel.

Curl’s early success was short-lived as Wietholder eventually powered his way around the leader and drove off from the rest of the field. Only Mike Harrison, who set quick time earlier in the night but started from the second row after a second place finish in heat two, was able to provide a challenge to Wietholder for the win.

Harrison passed Curl easily as Curl’s car suddenly became ill-handling as he slipped back to a 10th-place finish. Harrison would catch up to Wietholder but was not able to pass him. Wietholder held off Harrison by half a second as he grabbed the $1,000 checkered flag.