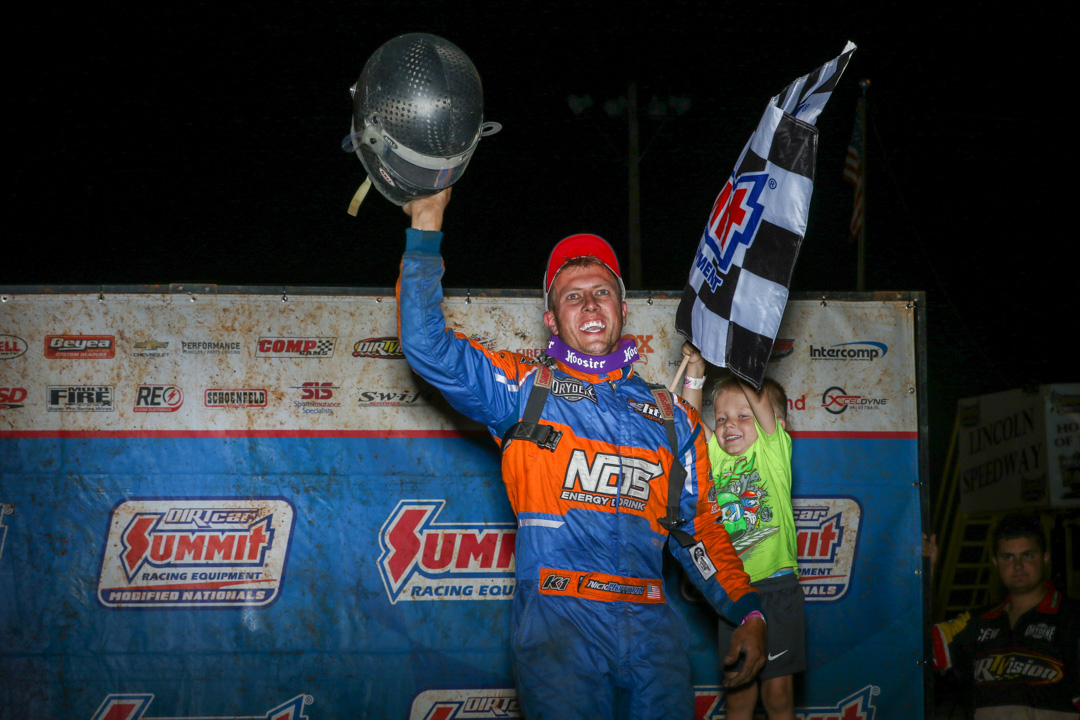 ZERO-TO-HERO: Hoffman Rallies from 20th in 17 Laps to Win at Lincoln

Twenty-five laps around a quarter-mile oval. Nineteen cars ahead of him. This was Nick Hoffman’s greatest mountain to climb so far this season, and yet, he still conquered it.

The four-time and defending DIRTcar Summit Racing Equipment Modified Nationals champion passed every car on the racetrack in 17 of the 25 Feature laps Sunday night to score a dramatic 10th tour victory of the season.

It was his plan to still try for the win, and he knew he had it in him rolling to the track for the Feature.

“As long as cautions fell my way in a couple situations,” Hoffman said. “And they did.”

Hoffman was forced to start the Feature from 20th, nearly dead-last on the grid, after colliding with Ray Bollinger in his Heat Race and taking his NOS Energy Drink/Elite Chassis #2 back to the pits with nose damage.

Five laps into the Feature, he was already up to 10th. Ten laps in, he had just taken fifth. Hoffman was putting on a clinic, passing cars every which way.

“At that point, you’re just weaving in-and-out, really,” Hoffman said. “You almost look like a weapon out there because you’re just left-and-right, and you don’t really know which way you’re going. Whatever lane’s clear.”

Two laps later, Hoffman was staring the rear bumper of leader Mike McKinney, almost two full seconds ahead in traffic. But that didn’t worry the Mooresville, NC-native, still with half of the race to be run.

Hoffman reeled-in McKinney in five laps, made the pass on the outside and drove off with his 67th career Summit Modified victory – arguably one of the most improbable and hard-fought of his career.

“The bottom was so fast and throwing wet crumbs out to the middle, it made the middle actually come-in,” Hoffman said of his lane choice. “There weren’t a whole lot of guys out there running in it, so I felt like I had an open lane of traction, really. So, I was able to charge the corner so hard, where those other guys had to slow down to really hit it right.”

The Summit Modifieds take the next three days off and resume action Thursday, July 7, at Macon Speedway as part of the 42nd running of the Herald & Review 100. If you can’t be at the track, watch every lap live on DIRTVision.