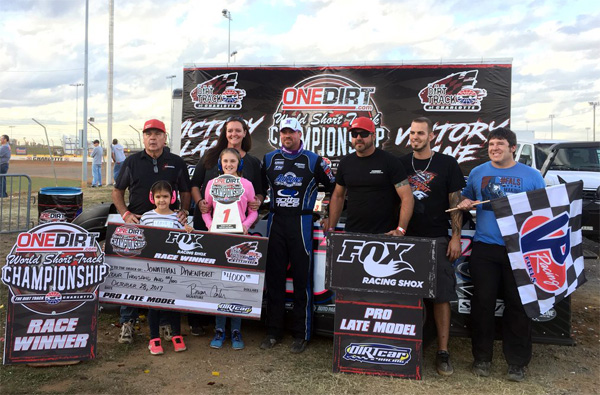 CONCORD, NC — Oct 28, 2017 — Jonathan Davenport decided on Thursday morning that he would make the four-hour trek from Blairsville, GA to The Dirt Track at Charlotte to enter into the second annual OneDirt World Short Track Championship.

“I have to thank Blake Spencer and Letti Bozard for giving me this opportunity. Heath, his crew guy, called me and gave me this opportunity,” said Davenport. “I’m just glad to get back in one of these Longhorns and get the feel of it.”

Davenport joined the Fox Shox Pro Late Model division wheeling the No. 6 Revolution Racing-owned crate car. He commandeered the lead after pole-sitter Matt Long succumbed to issues with his radiator on lap 19. Long held a 1.854 second lead over Davenport before he was forced to call it quits.

“I think Matt was the class of the field there,” added Davenport. “He was pretty good, and I don’t know if I could have got him in the traffic, but it is what it is. His misfortune was my fortune.”

Davenport was never seriously challenged for his lead position during the final 11 laps of the race, although Kyle Bronson worked tirelessly to try to reel him in. Max Blair completed the podium for the Fox Shox Pro Late Models.

With his win, Davenport pulled out of the Dirt Track at Charlotte $4,000 richer and with a new RACEQUIP helmet courtesy of COMP Cams and DRIVEN Racing Oil. Additionally, Thomas Robinson was awarded with the Hard Charger award and one pair of Fox Racing Shox after charging from a 26th position start to finish 10th. Layton Sullivan received the division Sportsman of the Year Award. 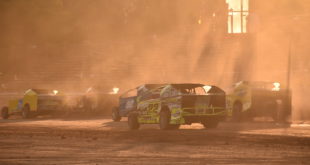