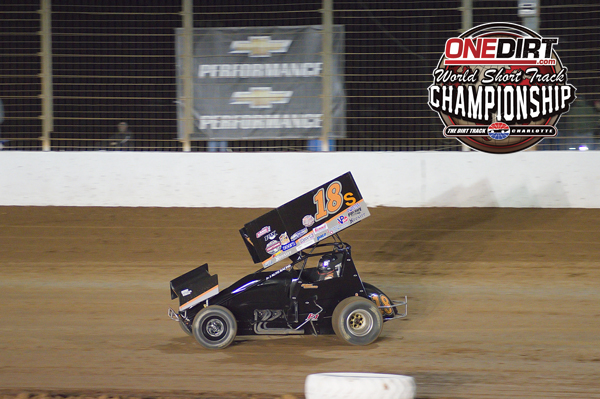 CONCORD, NC — Oct 27, 2017 — Michigan driver Eli Lakin set fast time over the Chevy Performance Pro Sprint Car field at the OneDirt World Short Track Championship with a 15.284 lap around the 4/10th-mile dirt oval at Charlotte Motor Speedway. Lakin’s lap time was nearly half a second faster than the rest of the competition.

Josh Shantz took the lead on the initial start of the Heat Race as Lakin fell to second. Lakin made a move to the inside but clipped the inside tire and spun to stop. Lakin would not return to competition, and a complete restart for the field was called.

On the ensuing restart, Indiana native Michael Summers took command and never looked back, scoring the victory. Shantz settled for second, with Zane Devault, Ryan Hunsinger and Tyler Fitzpatrick behind him.

Keep an eye on Lakin to see if he can find the speed he showed in Qualifying and make a charge in Saturday’s Championship event.