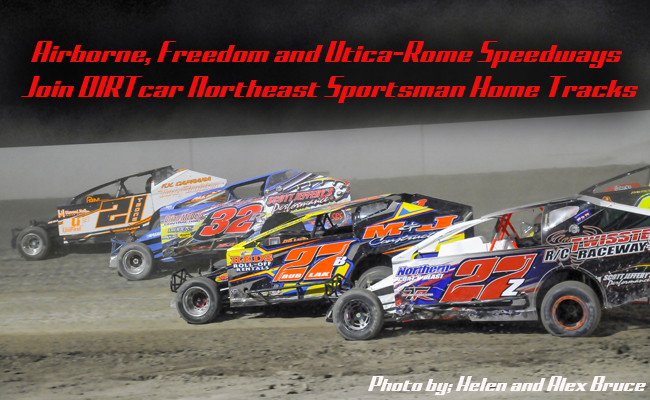 CONCORD, N.C. – Jan. 24, 2017 – DIRTcar Northeast officials are proud to announce the additions of Airborne Speedway, Freedom Raceway Park and Utica-Rome Speedway as Sportsman Modified home tracks for the 2017 season. The addition of the trio of New York facilities increases the number of DIRTcar Sportsman Modified sanctioned tracks to 17 for the upcoming season.

Airborne Speedway in Plattsburgh, NY returns to a dirt surface in 2017 with promoter John Walker leading the conversion. The track will host the DIRTcar Sportsman Modifieds on a weekly basis as well as a North Region tour event in September. Airborne is also the newest track to the Super DIRTcar Series tour. It will host the Big-Block Modifieds at the half-mile oval on Thursday, July 6.

Freedom Motorsports Park, located in Delevan, NY, provides a home track to drivers in the southwestern area of the state under the guidance of Bob Reis. The 1/3-mile clay oval hosts Friday night racing from May to September less than one hour southeast of Buffalo.

As previously announced, the 2017 edition of the DIRTcar Sportsman Series will feature a regional format with the schedule divided into four regions – North, West, Central and East. Regional and combined series events will take place 23 tracks for a total of 32 events with negotiations ongoing to add additional race dates.