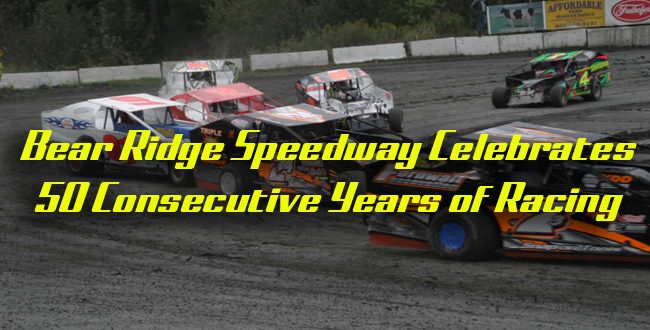 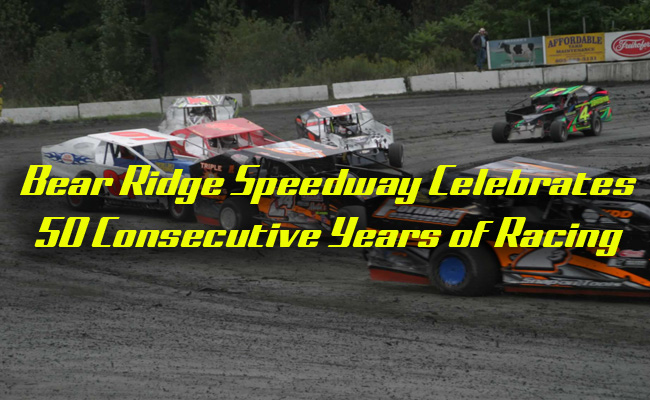 CONCORD, N.C. – MARCH 22, 2017 –Bear Ridge Speedway will celebrate its 50th anniversary of racing in 2017, but the accomplishment is even more impressive when you dig deeper into the story of the tight quarter-mile track in rural Vermont.

For all 50 seasons the track has been under the ownership or operation of an Elms family member. The track was initially the vision of George Barber while Charles V Elms Sr. was a part of his opening day operations team and eventually purchased the track from Barber in 1972.

Charles Elms Sr. continued in his role as the owner and operator of Bear Ridge until 1990 when he sold the track to his son, CV “Butch” Elms III. In 2006, April May Preston joined the track as a co-owner and the facility has continued to grow ever since.

“The fact that it’s been 50 years and it’s always been managed by one family is exciting. You can’t say that today about a lot of businesses,” Preston said. “If it weren’t for the love of the track and Butch’s dedication, we may not be celebrating 50 years.”

It’s an impressive feat for a track that initially planned its life expectancy to be only a couple of years. Located off I-91 near the New Hampshire state line, Bear Ridge is about 25 miles north of Hanover, N.H. and Dartmouth College. Its quiet location in rural Vermont certainly makes it one of the more unique dirt tracks in the country.

“When you drive to the racetrack, you think there really can’t be anything out here,” Preston said. “You drive down a dirt road and you’re wondering what you’re going to find. When you take the right-hand turn down into the track, it opens up almost like an amphitheater.”

Bear Ridge’s 50th season will be its seventh under DIRTcar Racing sanctioning for its Sportsman and Coupe Modified divisions, the track’s top and most popular divisions, respectively.

“We’ve made it through some rough times and now our car counts are up. Being affiliated with DIRTcar has been a big plus and we’re just really excited to say it’s 50 years of racing,” said Preston.

The track’s Sportsman Modified division routinely sees fields of 30 or more cars, a statistic Preston attributes in part to the track’s DIRTcar affiliation.

“Being this little back-of-the-woods racetrack in Vermont, nobody knows about us,” Preston explained. “It’s nice, but it’s bad because you want everybody to know about you. So the DIRTcar sanctioning, I think it lends a bit of credibility.”

The track’s Coupe Modified division is also a weekly staple and a fan-favorite. It features open-wheel Modifieds with 1930s-style bodies that have been in action since the track’s origins in the 1960s.

“I think the Coupes make us unique,” Preston said. “They’ve been running since day one and they truly race – they roll them, they wreck them.”

Bear Ridge’s DIRTcar sanctioning is just one of the many changes and improvements over the track’s storied history that has allowed it to remain vibrant. In recent years, the track has added a new novelty area, new VIP suites, a new scoring tower and was forced to expand its parking lot to accommodate increased attendance.

The success is largely due to a commitment to an affordable family-friendly atmosphere. The Bear Ridge kids club is popular among younger fans, who receive a toy at each race. The track also takes pride in offering fresh, local food products to its fans.

“We hand make our pizzas, they’re not frozen. We get fresh beef from the local butcher and we hand-cut our fries. Everything is fresh and hand cut,” Preston said.

Bear Ridge is excited to offer a 50th racing season with the same nostalgic environment and modern enhancements but maybe with a few extra fireworks. The 2017 season is scheduled to begin on May 6.

“We want to focus on an excellent season,” Preston said. “The fans want entertainment, but not all night. We’ve worked hard to make a show short, but not too short. We want our fans to feel they got their money’s worth.”

For more information on Bear Ridge Speedway and to view their 2017 schedule, visit www.bearridgespeedway.com or call (802) 222-4052.