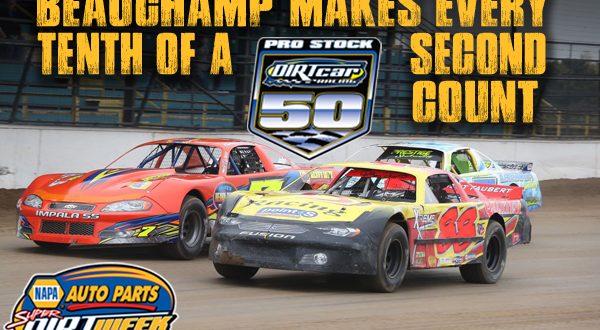 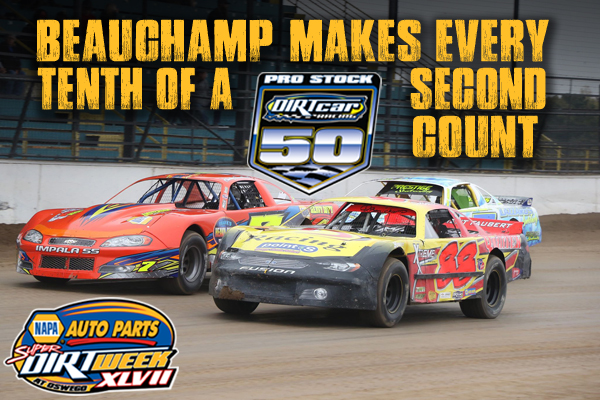 OSWEGO, NY — Oct. 7, 2018 — The NAPA Super DIRT Week DIRTcar Pro Stock 50 ended on Sunday with a drag race to the finish after C.D. Beauchamp gave leader Chuck Dumblewski a tap off turn four to conclude a 50-lap battle a mere .017 seconds ahead.

The competition heated up on Saturday afternoon with Time Trials as Fonda Speedway regulars Dumblewski and Josh Coonradt laid down a pair of Fast Times, only .008 seconds apart from each other, to set themselves on the front row for Sunday’s feature event.

Five-time defending Pro Stock 50 Champion Rob Yetman was set to make a run at a six-pack on a chilly Sunday afternoon. Starting on the outside of the second row, he stayed smooth through the first quarter of the race, until a restart on lap 14.

Yetman dove into corner number one right on the leaders’ tails when the rear end of the car swung around, taking out Coonradt, Pascal Payeur and his hopes to repeat once again at NAPA Super DIRT Week.

Restarting from the 27th position, Yetman’s battle wasn’t completely over, however, as he very impressively went on to pass 22 cars in the remaining 35 laps to finish fifth.

Meanwhile, back up front, frontrunners Dumblewski and Beauchamp continued a battle for the lead that started on the very first lap. Swapping spots back and forth intermittently, Beauchamp showed the way for much of the race, with Dumblewski right on his bumper.

Their battle came to a boil with eight laps to go, when Dumblewski took the lead back. Beauchamp stayed right on his heels and waited for the right time to make the move. Last lap, last corner? Seems as good a time as any other… and it paid off.

Beauchamp dove into corners three and four with a full head of steam, looking to the outside of Dumblewski. Coming out of turn four, Beauchamp reached Dumblewski’s rear bumper and gave him a little shove to the outside, making room for the two to drag race down the front stretch to the checkered flag.

Beauchamp edged Dumblewski by just .017 seconds in what could be considered the most exciting finish of the weekend. The crew was ecstatic on pit row when they saw No. 88 appear on top of the leaderboard. They carried it all the way into Victory Lane, where they met their equally hyped driver.

“I was just pedal to the floor and giving everything I had,” Beauchamp said. “It worked, and it was amazing.”

Beauchamp was not expecting Dumblewski’s challenge on the race’s final restart, but was relieved to get him back in the race’s waning seconds.

“I was surprised at the end by Dumblewski,” Beauchamp said. “He surprised me on the restart, but I managed to get him on the last corner.”

Overall, a very successful year for the Beauchamp team, culminating with his strong performance at The Steel Palace.

Chuck Dumblewski had a great race with 17 laps led, but came up short in the end, much to his dismay.

“[Beauchamp] got into me a little bit over in [turn] four, and it just loosened me up just enough that I had to get out of it,” Dumblewski said. “He beat me to the line. Disappointing.”

Feeling the slight bumper tap off of turn four, Dumblewski actually had to get off the throttle.

“I thought when it happened that I still had enough and didn’t have to back out that much, but he still was able to get me at the line,” Dumblewski said.

Justin Knight had a very solid race, as he was able to climb to the final podium spot, starting all the way back from 14th. He maintained his composure throughout the race, stayed out of trouble and earned the 11 spots he gained over the course of 50 laps.

“Third place is great,” Knight said. “I’m ecstatic about third place. The race was good, I avoided some mishaps here and there, and that’s what put us up here.”

While Knight’s machine was fast in all three lanes of the Oswego Speedway, he said a bid for the lead may have been a bit farfetched.

“We had a third-place car,” Knight said. “I don’t think we had anything for Chuck or C.D., they were in a league of their own.”

On a side note, the track surface was getting quite slick, as the Sportsman Modifieds had their 75-lap event beforehand, but Dumblewski and Knight said it was still racey.

“It was definitely racey, I mean you could get up a couple lanes and still go,” Dumblewski said. “There were some holes coming out of [turn] two that were pretty bad and upset the car, but other than that, the track was good.”

“It was definitely drivable,” Knight added. “There was only one little hole in two, and the rest of it was amazing.”