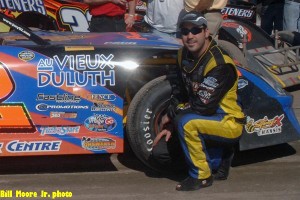 The 35-year-old driver negotiated the ‘Moody Mile’ in 38.604 seconds (93.255 mph) to pocket the $500 Terrell’s Potato Chips Pole Award. It marked the third time that Ladouceur has set fast time for the 25-mile BACC-OFF Pro Stock Championship, which is scheduled to take the green flag on Sunday at 12 noon.

Ladouceur, who competes regularly at Cornwall (Ont.) Motor Speedway, is seeking his first career victory in the Super DIRT Week Pro Stock event. His best finish is third, which he achieved in 2003 and 2004.

“This is my 10th time here for this race and I’ve never won the darn thing,” said Ladouceur, who previously topped Pro Stock qualifying at Syracuse in 2003 and 2009. “We been fast, but we’ve blown tires and had all kinds of bad luck at this place.

“This year we came with a different approach – we’re taking it easy, chilling out. We had Pastor Kevin from Finish Line come over to give us a little peace of mind and clear our heads.”

With his 5-year-old son, Tristan, ready to make his first visit to Syracuse on Sunday to watch dear old Dad in action, Ladouceur would love to finally reach Victory Lane.

“Hopefully we can bring him up on the stage tomorrow,” said Ladouceur.

Ladouceur was at least slightly surprised that he ended up with the pole for the BACC-OFF Pro Stock Championship. He didn’t feel like he hit his qualifying circuits just right with his Cadillac-bodied machine.

“The track slowed down quite a bit from yesterday and that kind of caught us off guard,” said Ladouceur. “But we didn’t bother changing much. We just figured it would be the same for everybody.

“We did that first (qualifying) lap and I thought I kind of gave up a little too much (in speed), so when I came around for the second one I went harder. It’s a good thing the first lap was good enough to get the pole because I threw it away on the second one. I tried to stay lower trying to find something on the bottom and it just didn’t stick.”

Ladouceur’s countrymate, Jocelyn Roy of Ste-Helene, Que., turned a lap of 38.888 seconds (92.574 mph) to position himself on the outside pole for Sunday’s 25-miler. He received a check worth $250 from Terrell’s Potato Chips for his efforts.