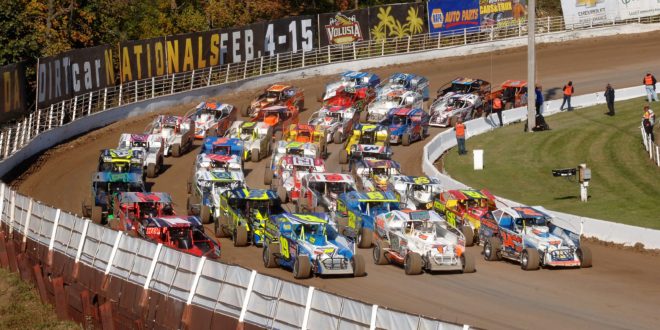 CONCORD, NC – Some race cars look like spaceships, packed with all the latest technology. Other race cars once took Gramma to the grocery store before being gutted for the track. In between are professional racers and hobby racers who are either looking to get their first professional start or just hit their local track with their friends every weekend.

Hundreds of Sportsman Modified and Pro Stock drivers race in the Hoosier Racing Tire Weekly Championship and series races under the DIRTcar banner. The success of the division is attributed to a rulebook that promotes parity, fairness and most importantly safety.

The Chevrolet Performance Crate Engines are key to the success of both divisions. General Motors states, “The durable CT350 is the engine budget-conscious racers can depend on for competitive performance and low maintenance.”

DIRTcar Sportsman Modified Series Director Cory Reed has overseen the Sportsman throughout their renaissance along with DIRTcar’s Technical Staff.

“I am very happy with how things have developed over the last four to five years. We always had a really strong product but we didn’t know how to harness it. Now we’ve put a bigger emphasis on the class,” said Reed.

Recently DIRTcar and Pace Performance have combined forces to make it even easier for racers to get back on track in the rare case of an engine component failure.

While the crate engine program was successful, it has also grown exponentially and needed a new structure. In order to facilitate the constantly growing numbers of DIRTcar racers in the Northeast, Pace and DIRTcar have vetted eight regional certified repair centers.

“The eight regional certified repair centers will provide a lot of stability. This program shores up the entire foundation of the crate engine program in the Northeast,” said Reed. “As a sanctioning body, we need to keep internal control of the engines. We’ll keep a better handle on every engine when it comes to being broken in or repaired and sent back out. That’s where the racer is going to benefit.”

Racers want to know what they are getting when purchasing an engine, especially a crate because they can’t remove and replace parts as you might on a Big Block. By 2022, all crate engines in the DIRTcar Northeast system will have been verified and entered into a database.

Whether it is new or used, DIRTcar and Pace will have a full record of what has been done to the engine including dyno results. Furthermore, the network of engineers and mechanics now available to the Northeast means more efficient repairs which saves races time and money in the shop.

“You can buy a crate engine anywhere but you’ll have to get it verified at one of our repair centers,” Cory Reed noted. “Your best bet is to buy directly from one of the shops themselves and have it already verified.”

In addition to providing durable and affordable engines to a majority of racers in the Northeast, Chevrolet Performance also supports racing by sponsoring the biggest DIRTcar Sportsman Modified Series race of the year at NAPA Super DIRT Week with the Chevy Performance 75. During a week full of the best dirt track racing, the Sportsman race perennially stands out. Watch last year’s highlights for proof.