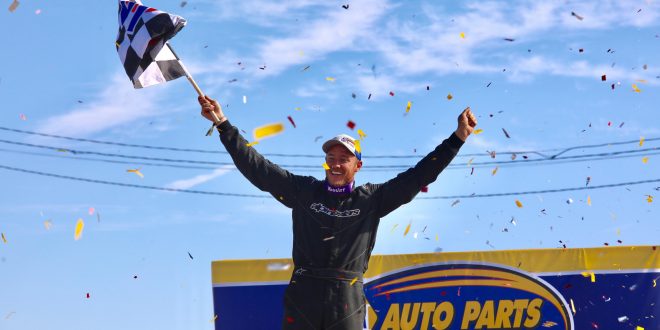 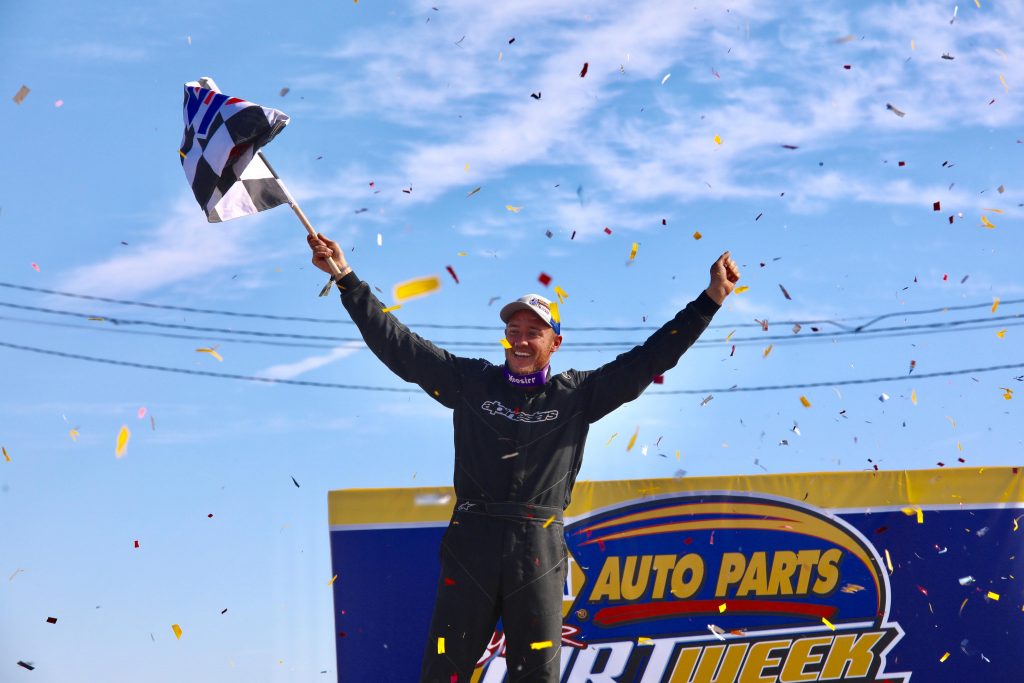 That was the big story for the DIRTcar Hoosier Racing Tire Pro Stock Weekly Championship points leader Josh Coonradt on Sunday afternoon, as he scored the victory in the Wilkins RV 50 at Oswego Speedway in dominant fashion by taking advantage of a mistake by his competition in the early going.

Fastline Performance Pole Award winner Tony Markou kicked off the show by jumping out to the early lead through the first nine laps. He looked to be a strong contender to hold the field off early as Coonradt challenged to the inside on lap nine, until the rear-end of Markou’s #10 swung around going into turn one.

No contact between the two was made, Markou just looped it. He was forced to restart all the way back in the 29th spot, but with 41 laps still to be contested, Markou’s race was far from over. A charge back to the front was only just beginning to brew in his NAPA Super DIRT Week debut.

Back at the head of the field, Coonradt assumed the lead and took off immediately, jumping out to a nice lead ahead of Luke Horning and five-time winner Rob Yetman.

Over the remaining 40 laps, numerous yellow flags flew for various accidents on the track, most frequently in the final 10 laps. From all of those cautions, Markou was able to make up a ton of track position, but it also seemed like his car was getting faster and faster with each lap.

With just eight laps remaining, Markou cracked the top ten again, and by lap 45, he was riding fifth. A final green-white-checkered restart on lap 49 saw Markou dive to the inside of Jason Casey for third into turn one, swiping the spot away in the final turns and crossing the stripe with the final podium spot to wrap-up one of the most incredible comebacks the Wilkins RV 50 has ever seen.

“It was a great charge. Some of it was attrition, some of it just really good evasiveness to be able to get by,” a grinning Markou said after the race. “The car started coming to me a little bit, and I could get drives where it looked like other people’s cars weren’t working very well.”

As for Coonradt, what a season it’s been for him behind the wheel of his #00. He was recently crowned the Albany-Saratoga Speedway track champion, is leading overall DIRTcar weekly points standings, and now has the ultimate crown jewel in Dirt Pro Stock racing to add to his trophy cabinet

“This is really a dream come true,” Coonradt said. “This is the biggest race of the year, the one everybody wants to win. We haven’t had the best of luck in the past, but today, we were the one to beat.”

A bit of tough luck struck Coonradt’s operation on Friday night in the Heat Races while leading early. A half-gallon of water wound-up inside the fuel cell before he took the green, causing him to slow and retire early. But he and the crew were able to drain the water and make the necessary repairs, and it was almost like nothing ever happened come Sunday afternoon. Coonradt had been locked into the show via Time Trials on Thursday afternoon, which guaranteed his starting spot on Sunday, despite his misfortunes in the Heat.

Through all of that, a bit of a comeback story of his own was present after the checkered fell on Sunday. But a veteran behind the wheel like himself knows that on a big 5/8-mile like Oswego, starting position and clean air is key, and he used that to its maximum extent to complete that comeback by the end of 50 laps.

“I just figured if I got out front in clean air, we’d be alright, and that was the case,” Coonradt said. “The longer we went, the better the car got.”

Coonradt may have walked away the winner, but in the race’s final stage, it seemed as though Markou had the fastest car on the racetrack. His urgent efforts to get by Casey in the final circuits were very apparent, and Markou knew it as well.

“I think if there were a couple more laps, I would have had something for Coonradt,” Markou said.

Even though Coonradt and Markou only battled for the lead in the opening laps, the amount of respect the two have for each other shined through. Close racing, no rough play, and Markou commends his fellow competitor for that.

“To Josh, what a great job he did. I’m super proud of him, he does this all on his own, it’s incredible.”