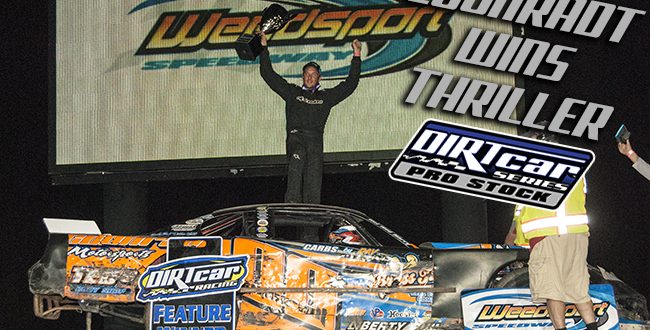 WEEDSPORT, NY – September 3, 2019 – After the dust settled from the Super DIRTcar Series 100-lap contest at Weedsport Speedway, the DIRTcar Pro Stock took to the track for a thriller of their own. Josh Coonradt never had a comfortable lead as he raced side-by-side with Dave Segin and Pete Stefanski for most of the race. Stefanski took the lead late on the bottom side only to have Coonradft come back around the outside for the win. Nick Stone kept his nose clean and grabbed the final step on the podium.

“This is the first year we’ve run with Pete Stefanski and he always runs us clean,” Coonradt said. “I think he had the better car until we hit traffic, but it was a hell of a race.”

Track conditions provided a lot of bite from top to the bottom, which resulted in a three groove race track. The Pro Stocks took advantage and ran two and three-wide lap after lap.

Coonradt noted, “There was bite all the way at the bottom and all the way at the top. Starting on the front row you really can’t see where everyone is running and moving around. We just played it how we were going and it paid off. “

It had been two years since the DIRTcar Pro Stock Series raced at Weedsport Speedway as last year’s Labor Day Double Play was rained out and drivers are eager to return to the premier facility.

“I can’t wait to come back here. It’s something we look forward to in the future,” said Coonradt.

“We set up for the bottom knowing everyone was going to run the top. We didn’t have a choice but to get off the bottom. Lapped traffic is part of the came. It is what it is,” Stefanski said of his race. “It was fun. We all want to win and sometimes lapped traffic will get you.”

Nick Stone, the winner of this race two years ago, finished third.

He too was searching for the right line throughout the race, “We were just working the bottom. We probably should have left some gear in it. I didn’t think we’d be that tight to the bottom. We just kept working. I moved to the top a few times to see what I could find but I was better on the bottom.”