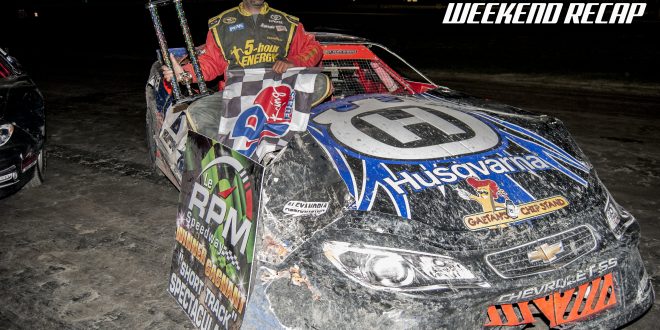 CONCORD, NC – September 10, 2018 – The DIRTcar Pro Stock tour had a memorable double-header starting at Le RPM Speedway and finishing at Airborne Park Speedway. The highly competitive tour saw two different winners in as many days. On Friday, September 7, Roch Aubin was awarded the victory after leader Dany Vogel was light on the scales in post-race inspection at Le RPM Speedway. The next day CD Beauchamps made a return visit to the familiar Airborne Park Speedway Victory Lane.

Le RPM Speedway lies nestled in rural Quebec, surrounded by infinite rows of corn, pickle barrels, and future bacon. While the price of admission was worth the show the Super DIRTcar Series Big-Block Modifieds put on, the DIRTcar Pro Stocks were determined to prove their mettle to the hardy fans in the stands. Yves Hamel and Rob Yetman lead the field of Pro Stocks to the green flag and the battle was on. Roch Aubin made his presence known early and challenged Hamel and Yetman for the lead.

Rob Yetman found speed on the high-side and looked to be the car to beat on long green flag runs. Unfortunately, the race caught caution fever and the restarts were chaotic, shuffling the field like a deck of cards. While the top 3 of Hamel, Aubin, and Yetman skirmished, CD Beauchamps caught them and took the lead on lap forty-two. A late race caution created a green, white, checkered flag finish. Coming to the white flag, then leader Yves Hamel was hit in the left rear quarter panel and spun out in front of the field. Several cars piled in and the race was red-flagged. After the wreckage was cleared, the second attempt at a green, white, checkered flag finish was successful. Day Vogel crossed the finish line first. But that was not the end of it.

Dany Vogel’s Pro Stock failed post-race inspection for weighing too light. The win was then awarded to Roch Aubin, who won the last DIRTcar Pro Stock race at Le RPM Speedway in 2017.

Aubin and his team were ecstatic: “We won the DIRTcar Pro Stock tour race here last year. This would be my second DIRTcar tour win. With two laps to go we managed to skate right by the big wreck and get the lead. The car wasn’t the best of handling cars here at this race track for this type of night but we had to start back at the tail after spinning out. We made some quick adjustments and managed to come right back up to the top.”

It was a memorable win for Aubin and his team and they have big plans for the end of 2018. “We’ll be going to Oswego for Super DIRT Week and down in Charolote as well.”

The next night, September 8, the tour stopped at Airborne Park Speedway. CD Beauchamp picked up the DIRTcar Pro Stock victory for the second consecutive season at Airborne Park Speedway.
Beauchamp started in the ninth position on the grid and worked his way up to the lead on lap-20 when he worked under Byron Wescott. The two ran inside the top three for the remainder of the race.
Wescott was about six car lengths back with five laps remaining, and went to the outside of the track. Wescott was charging and came up one car length short, as Beauchamp had just enough to win.
Pascal Payeur was the leader for laps five through 18, but ended up third. Roch Aubin and Mike White finished fourth and fifth, respectively.

“We try to set our car up to be better as the race goes on,” Beauchamp said. “Our car wasn’t great on restarts, but we were good on green flag runs.”

Beauchamp was crowned as the 2018 Pro Stock Champion at the Cornwall Motor Speedway last weekend. “This is our seventh Pro Stock win of the year, so were very happy.”

The next DIRTcar Pro Stock tour race is at Mohawk International Speedway on Friday, September 14.