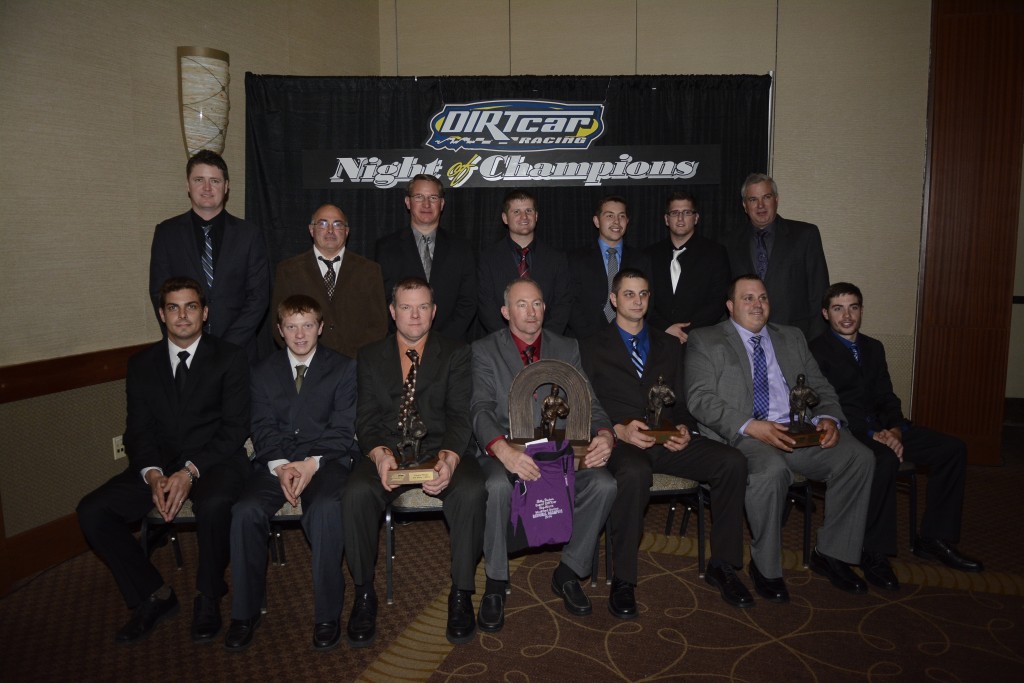 LIVERPOOL, N.Y. – November 23, 2014 – The brightest DIRTcar Racing stars of the Northeast region gathered at the Holiday Inn Saturday to receive championship awards and other accolades during the annual Champions Banquet.

Big Block Modified star Billy Decker took home the championship trophy for the Super DIRTcar Big Block Modified Series, finishing out the season with a mere six-point lead over Matt Sheppard after November’s races at The Dirt Track at Charlotte.

“Part of the measure of an award is the competition, and I really have a lot of respect for my fellow competitors,” said Decker, who credited crew chief Scott Jeffery and hardworking crew members for his success throughout the season. “cott works tirelessly making sure things are right, and our program showed it this year. We were prepared for every Super DIRTcar Series event. We had zero failures, zero engine failures, zero car failures.”

Decker, of Sidney, N.Y., claimed a total of three Super DIRTcar Series victories in 2014, winning first at Rolling Wheel Raceway Park in July and following it up with first-place finishes at Ransomville Speedway and Weedsport Speedway in August.

“We have a great foundation, with (car owner) John Wight and LJL Racing. We expect to be competitive in the championship year in and year out,” Decker said. “Championships are won at the shop. Our car rolls out of that racecar shop, and it’s ready to win. If you’re not ready when you roll out of the race shop, you can’t win on the race track.”

“It was getting real close at the end there, but we kept with it, kept going to tracks, trying to win,” said Rudolph, who also raced full-time in the Super DIRTcar Series, finishing sixth in point standings and claiming the KSE Hard Charger Award. “We were able to keep in the number one spot in points.”

“It’s such an accomplishment for me. It’s a dream come true,” Desjardins said. “We never thought that we would win this thing. It’s so much for me and for my team. I would like to thank my crew. They work so hard week after week.”

A special award, the Glenn Donnelly Award of Excellence, was presented to Don and Jo Ann Davies. The award, named after the founder of DIRT Motorsports, now known as DIRTcar Racing, is presented to a member of the racing community who has made outstanding contributions to the sport of racing in the Northeast region. The Davies, longtime columnists for Area Auto Racing News, have been a great influence to the racing community, not only providing unbiased accounts of racing events in the region, but also have been pillars of support for race teams, supporters and fans alike.

Mr. DIRTcar Championship awards were presented to drivers based on their best 16 finishes in their respective division at any DIRTcar sanctioned track.

For the third year in a row, Hearn claimed the title in the Big Block Modified division.

“One of our pre-season goals was to win track championship at both of our weekly tracks,” stated Hearn, who was not in attendance at the banquet but prepared a statement to be read at the award presentation. “But to obtain a perfect score of 16 wins in a best-of-16 series has surpassed our own expectations.”

David Hebert claimed the Mr. DIRTcar award in the DIRTcar 358-Modified division after claiming ten victories in 2014 and 30 top-ten finishes out of 34 starts.

“Every year it gets tougher and tougher. It’s getting so the competition every year steps up,” said Evoy, who also claimed the honor in 2012. “So you have to keep stepping up your game every year.”

With 27 top-ten finishes out of 29 starts and a total of 12 wins this season, Nick Stone took the Mr. DIRTcar Pro Stock Championship.

“This is the best year I’ve had in a long time,” Stone said. “I haven’t had any championship anywhere. Everything went together. It’s been fun, and hopefully we can keep doing what we’re doing.”

In all, DIRTcar and World Racing Group distributed nearly $300,000 in 2014 in point fund awards to deserving drivers thanks to support from Hoosier, VP Racing Fuels, and a number of other marketing partners. With the 2014 season concluded, drivers and fans will set their sights on the 2015 opener for the Super DIRTcar Big Block Modified Series, DIRTcar Nationals presented by Summit Racing Equipment, which is set for February 10 through February 21.

Awarded for outstanding contribution to the sport of racing