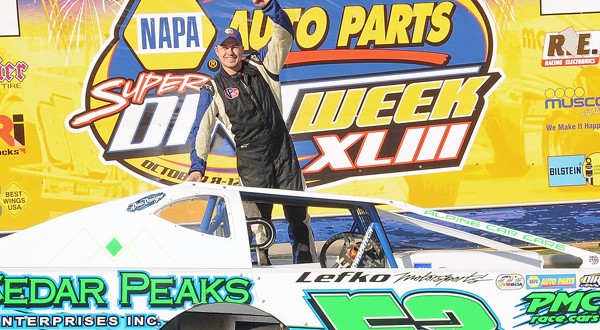 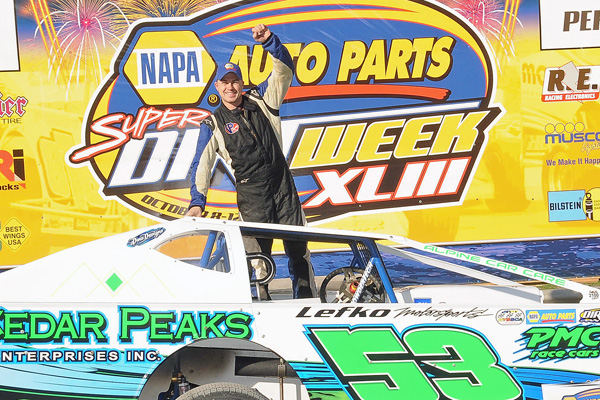 SYRACUSE, N.Y. – October 10, 2014 – A cluster of rising stars strutted their stuff Friday afternoon, competing in the annual DIRTcar Futures races for “Moody Mile” rookies. Racers in the DIRTcar Big Block Modified, 358-Modified, Sportsman Modified and Pro Stock divisions who have never qualified for a NAPA Auto Parts Super DIRT Week feature race in their division or higher took advantage of a little extra track time and a chance of glory at one of motorsport’s biggest events.

King (No. 165, photo below by Alex Bruce) started second on the grid, but charged to the lead over polesitter Davis at the green flag. Davis narrowed the leader’s margin to 0.257 seconds in lap 7, but King charged ahead. A last-lap caution resulted in a yellow checkered finish and King taking the $750 prize check.

“We started in the front row, got a good jump on the start, took off and we started leading,” said King, exhilarated to make it to NAPA Super DIRT Week Victory Lane. “It’s hard to believe you get to stand up there where some of the greats have stood. Even though it’s not the big race, it’s still pretty huge for us, being a local team and coming.”

“We sat on the pole, the best place to start for a race like that,” said Jeseo, who earned $600 for his Futures win. “I just hit my marks, and the car was great.”

Tom Harkins of Hudson, N.Y. (No. 07, photo below by Alex Bruce) bested fellow Capital District racer Randy Casselman of Johnstown, N.Y., to win the 8-lap Pro Stock Futures feature by 0.259 of a second to claim $400 in winnings.

“The race was really good. The last two laps the car got a little squirrelly, but it was a good, solid race, a lot of fun,” Harkins said, adding that Friday’s win will

Whitey Slavin of Wyantskill, N.Y. (No. 53, top photo by Alex Bruce), and Brian Krummel of Middletown, N.Y., were victorious in the pair of DIRTcar Sportsman Futures features, each claiming the $400 winner’s share.

Slavin pulled off a dramatic victory in the first event, which ended one lap short of its scheduled 12-lap distance due to meeting the 15-minute time limit. Slavin started out third with Matt Juniak taking the initial lead over Dave Constantino.

The yellow flag waved for Bob Reis before the completion of the first lap and Slavin claimed the lead off the restart. Janiak raced ahead, and soon started to close in on the new leader around lap 4. By lap 11, Janiak was within a couple car lengths of the leader, but it wasn’t enough to catch up with Slave before the checkered flag waved.

Janiak wound up second and Ryan Stabler finished third with Taylor Lam and Dave Constantino rounding out the top five.

Krummel (No. 44, photo by Alex Bruce) controlled the second 12-lapper, cruising to victory by 3.018 seconds over Tyler Meeks of Evans Mills, N.Y. Krummel started third, but lost positions off a restart midrace while Jeff Watson worked his way from his fifth starting position to the lead. By lap 6, Krummel made his way back up to the top 3, and in lap 7 he passed for the lead.

“I just did my best to avoid making mistakes,” Krummel reflected after the race. “I made a couple in the earlier laps and I realized how much distance I had lost and I thought it was important not to take as many risks through each turn and calm down and just let off the gas a little bit.

“It’s really nice that they do the Futures deal for those of us who haven’t had any track time, especially side-by-side,” Krummel added.

NAPA Auto Parts Super DIRT Week XLII continues Saturday, Oct. 10, featuring the USAC Silver Crown “Salt City 78” at 1:30 p.m. followed by the “Salute to the Troops 150” for the 358-Modifieds. The DIRTcar Sportsman Modifieds return to the track Sunday morning for their championship race before turning the track over to the DIRTcar Pro Stocks and the premier Syracuse 200 for the Super DIRTcar Series Big-Block Modifieds takes the green flag at 2 p.m.