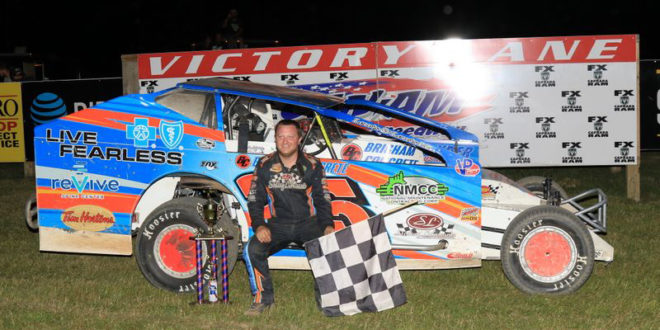 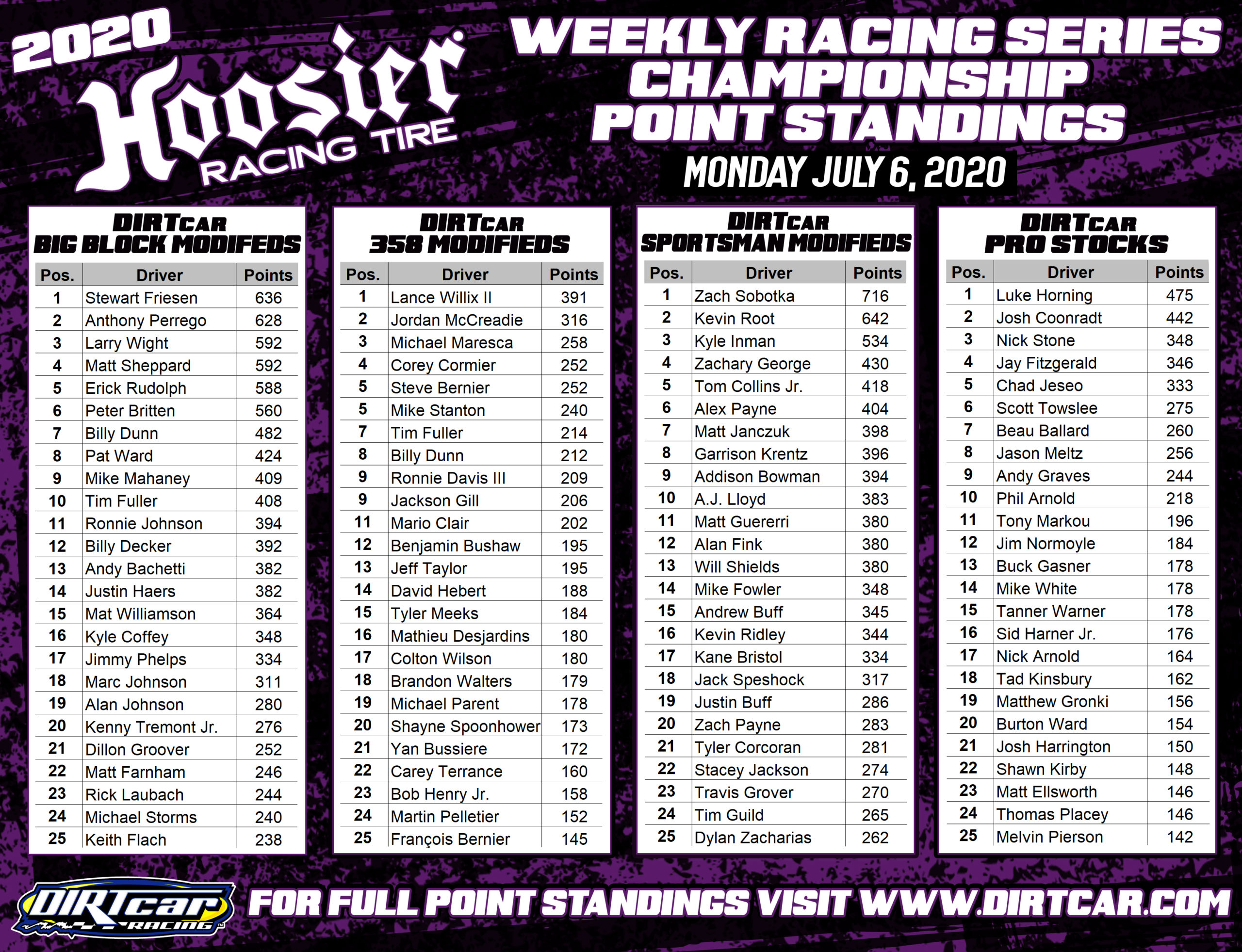 WEEDSPORT, NY – Another week in our 2020 silly season has come and gone. Stewart Friesen has overtaken Matt Sheppard, Anthony Perrego, and Larry Wight to lead in DIRTcar Big Block Modifieds. Lance Willix Jr. continues to set the standard in DIRTcar 358 Modifieds with young gun Jordan McCreadie hunting him down. Zach Sobotka has been lights out in 2020 winning all over New York State in his no. 38 DIRTcar Sportsman Modified. Luke Horning sits atop DIRTcar Pro Stock Standings.

Let’s get into it with Bear Ridge Speedway in Vermont! 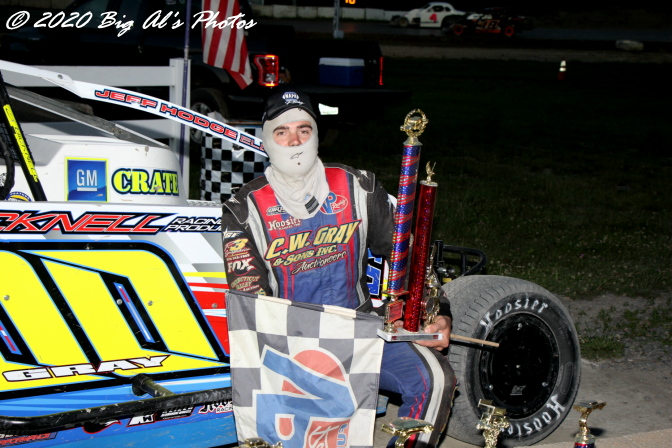 In the DIRTcar Sabil & Sons Sportsman Modifieds Jason Gray put on a whale of a performance coming from deep, deep, deep in the field. Gray took the lead on lap thirty and from there sailed on for the win. James Fadden picked up his tail on the way by making his way to a second-place finish. Jordan Fornwalt joined the duo to claim the final victory lane spot. Richie Simmons with his best run of the season came home in fourth with Matt Lashua finishing in fifth.

Orange County Fair Speedway offered up Twin 50s for $5,000 each; Sheppard and Friesen split them 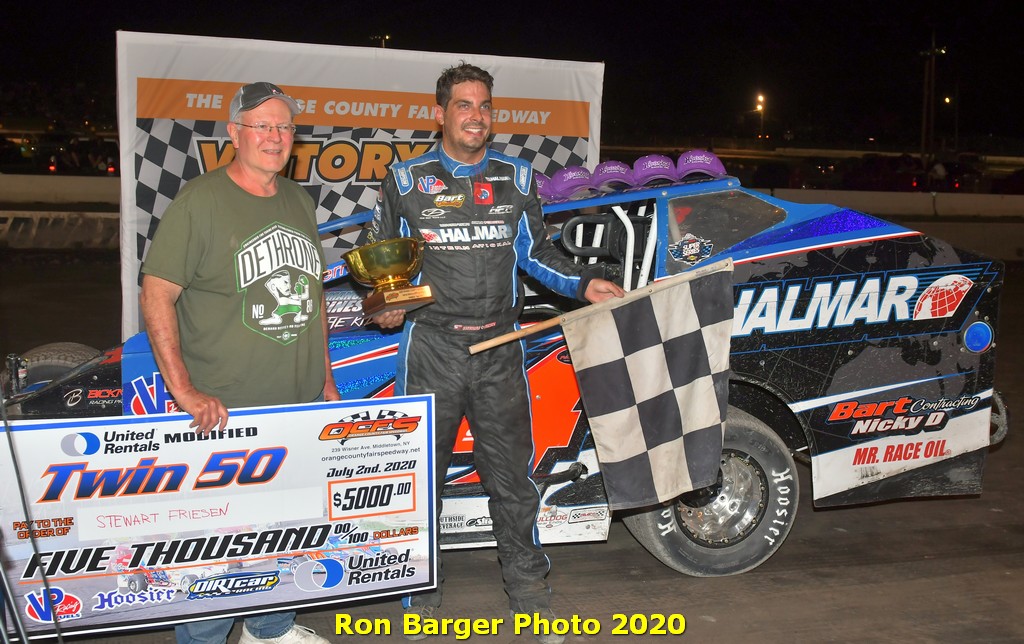 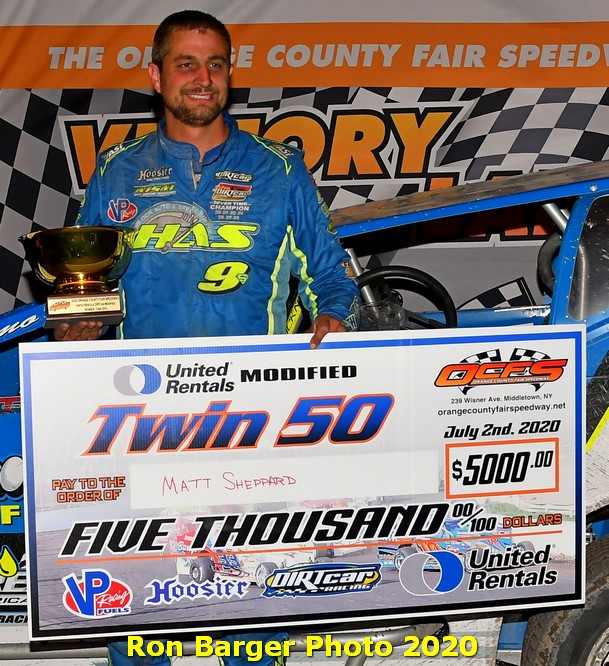 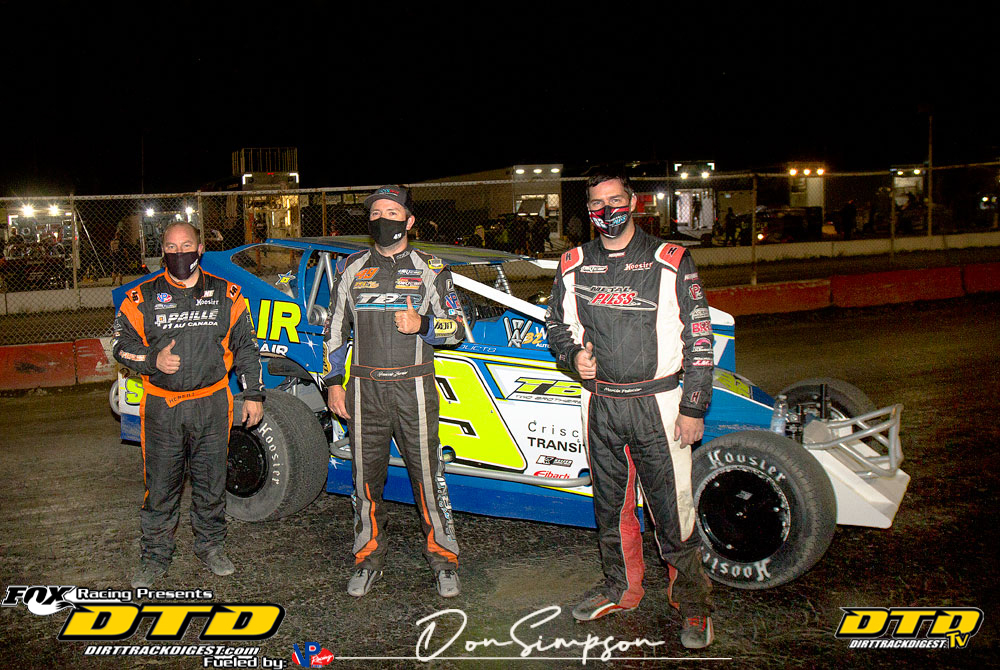 With 2 laps to go, David Hébert took the measure of Martin Pelletier but will lack time to catch up with Bernier who wins a 2nd race in as many programs at Granby in 2020. Hébert finished 2nd, Pelletier 3rd, Steve Bernier 4th, and Michaël Parent 5th. 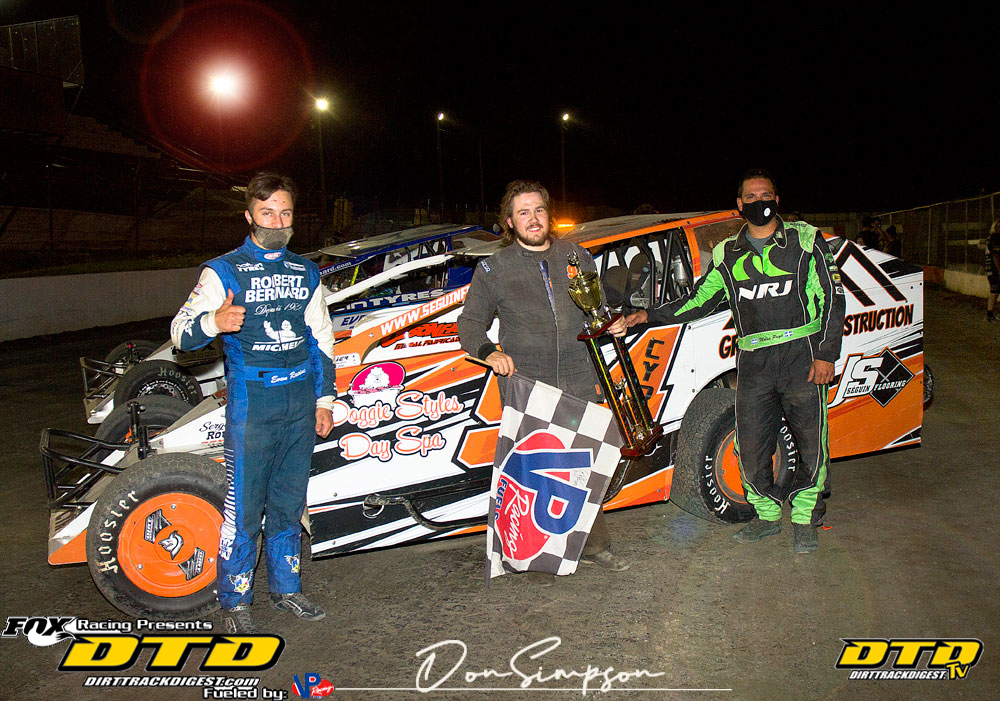 The youngest of the Racine brothers leads the first 10 laps before committing an error and falling back to 6th place. Junior Mailhot took the opportunity to take the lead and Moïse Pagé pursued him. In the 24th lap Pagé takes the first row and leads for 3 laps before seeing Gabriel Cyr overtake him from the outside. The young Ontario driver stayed in the top 5 throughout the race. He will lead the final laps to win his first career victory in Quebec. Even Racine finished 2nd after taking the measure of Pagé on the last lap. Alex Lajoie and William Racine complete the top 5. 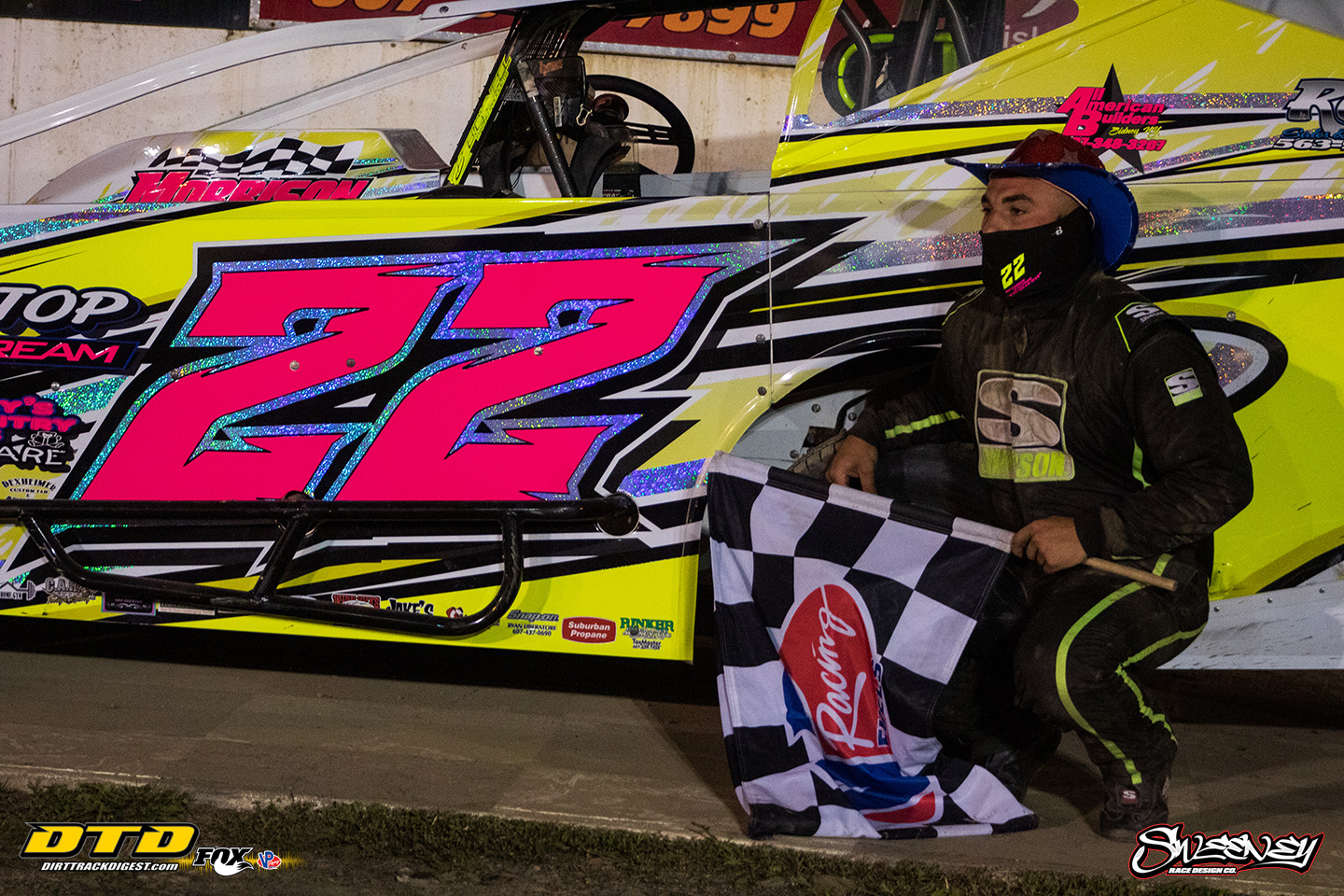 The DIRTcar 358 Modifieds were the penultimate feature of the night and they did not disappoint. Pole sitter Shayne Spoonhower led the race early from the pole, but he had his hands full with Brandon Walters the entire time. Walters looked great on the top side of the track, but struggled to complete the pass due to a fury of caution flag in the early going. Things finally went Walters’ way as he made the pass on Spoonhower and did not look back from that point on. “The Ice Cream Man” went on to claim the victory, his first of the season. Spoonhower finished in 2nd with Tom Eiklor, Corey Cormier, and Dave Marcuccilli rounding out the top five. 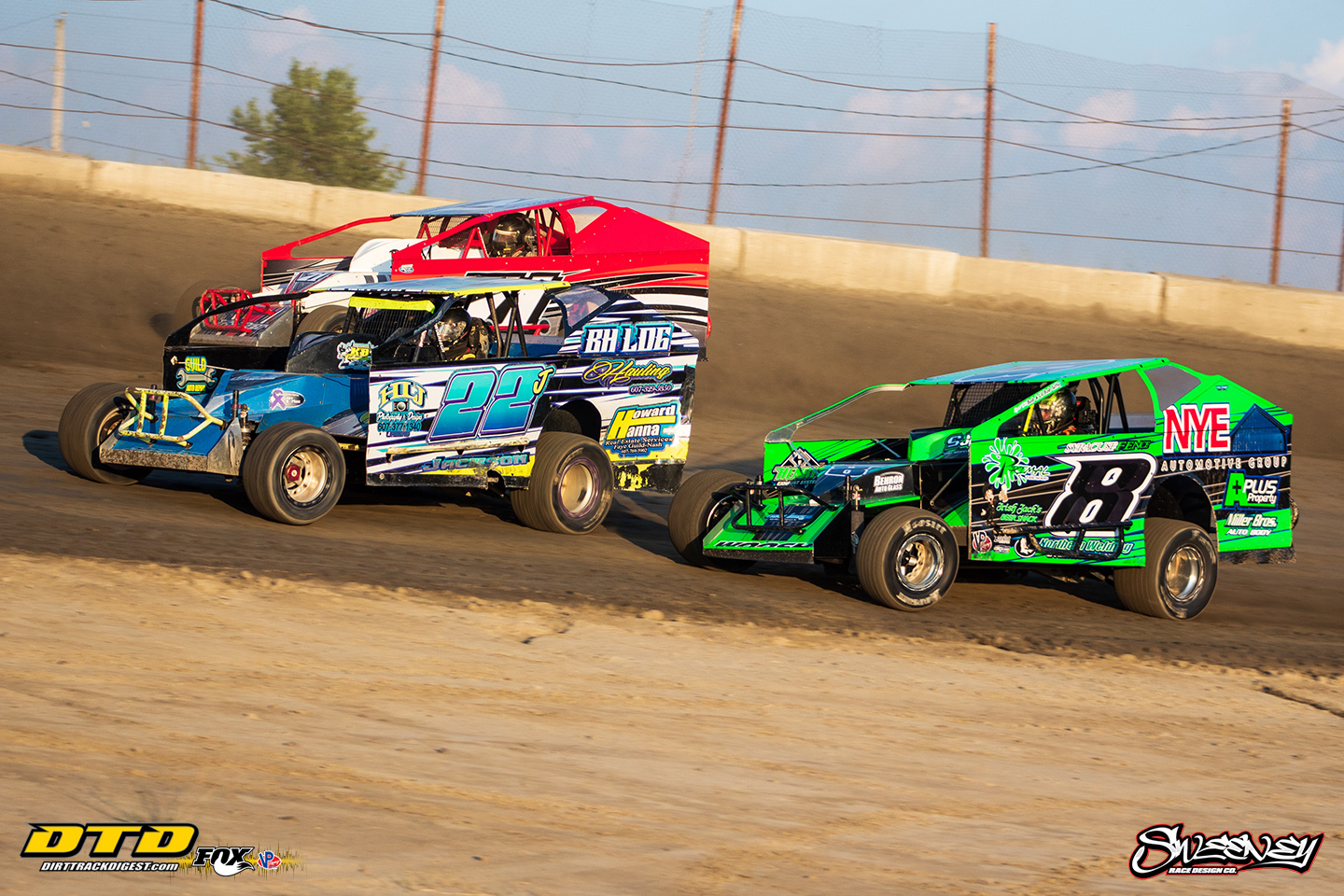 The DIRTcar Sportsman feature was led early by pole-sitter Mike Austin, but he would eventually sacrifice the lead to Will Eastman off of a restart. While Eastman was out front, Alan Fink was slowly working his way through the field from his 12th place starting spot. Fink would eventually take over the lead and appeared to be on his way to an easy victory, but the caution flag flew with just two laps remaining and erased his advantage on the field. Fink was perfect on the final restart and was able to hold off the field behind him to score his second win of the season. 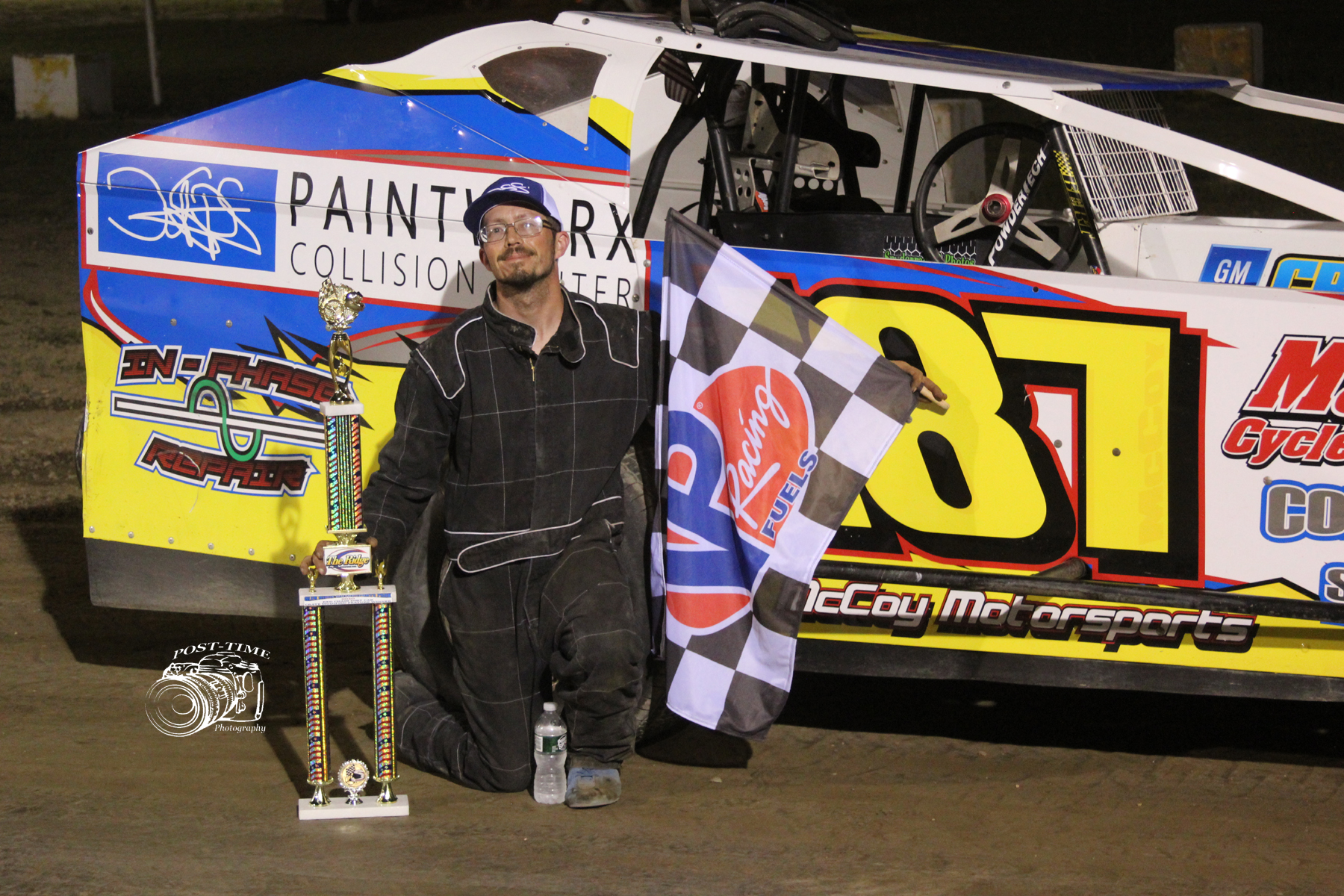 Scott McCoy took advantage of a late-race restart and a mistake by Tucker O’Connor to win the DIRTcar Sportsman Modified Feature at Glen Ridge Motorsports Park. 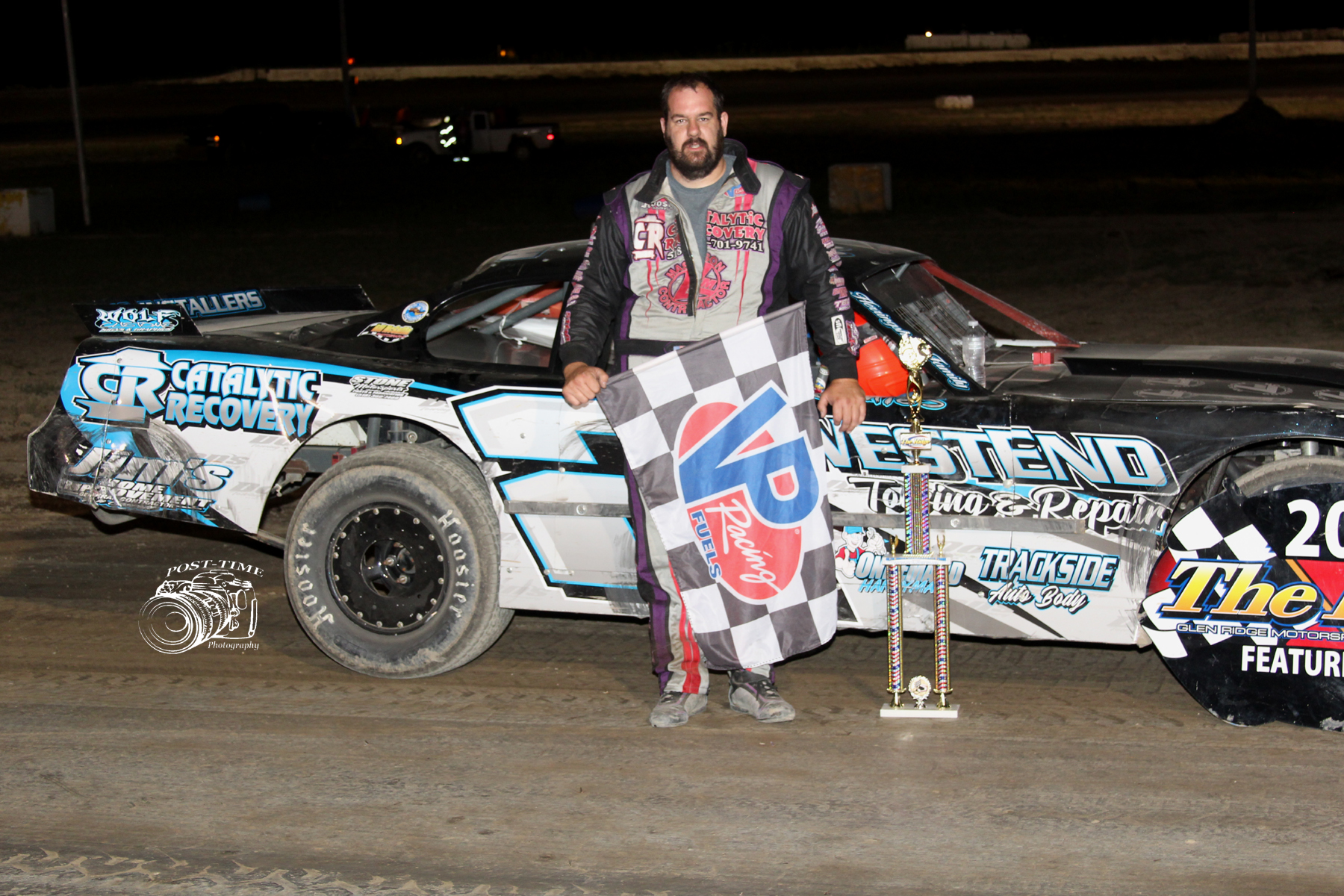 Luke Horning dusted the field to win his first Feature at The Ridge in 2020. 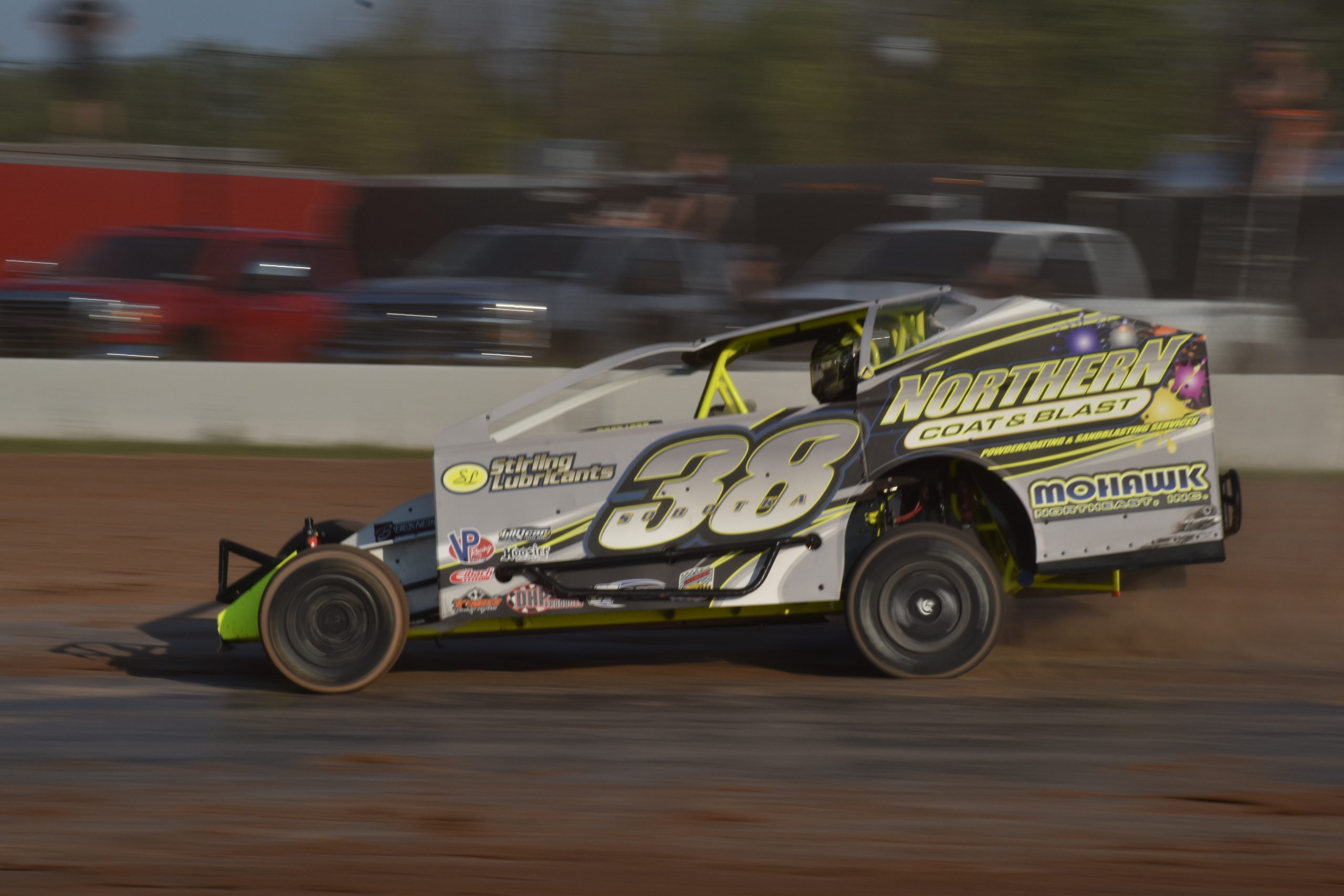 Zach Sobotka picked up his second win of the season after a hard-fought battle with Alex Payne.

Wight keeps winning, Matt Guererri having a banner year at Land of Legends 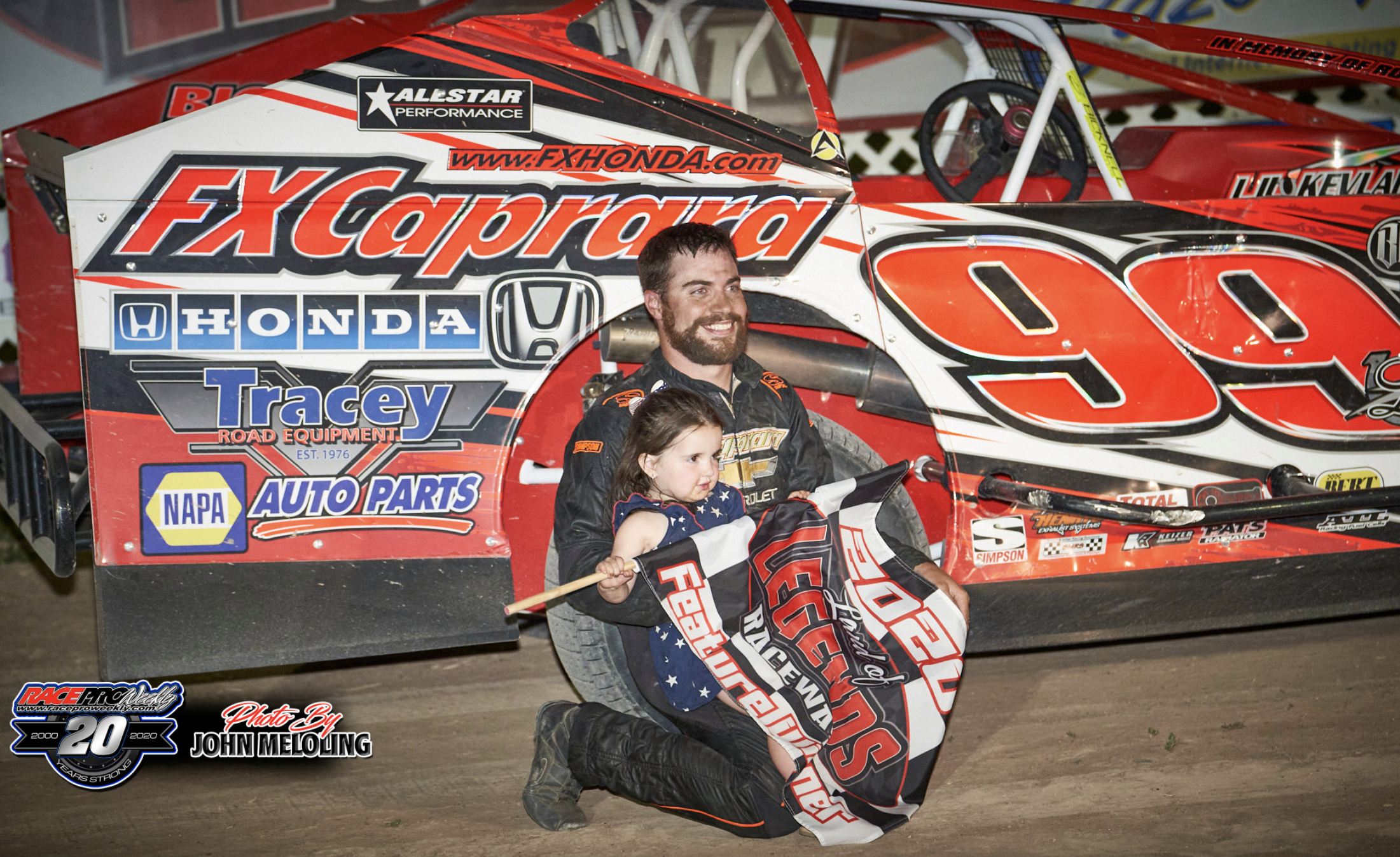 Larry Wight made a daring move to wrestle the lead from Erick Rudolph en route to a convincing 35-lap Pepsi Big-Block Modified. 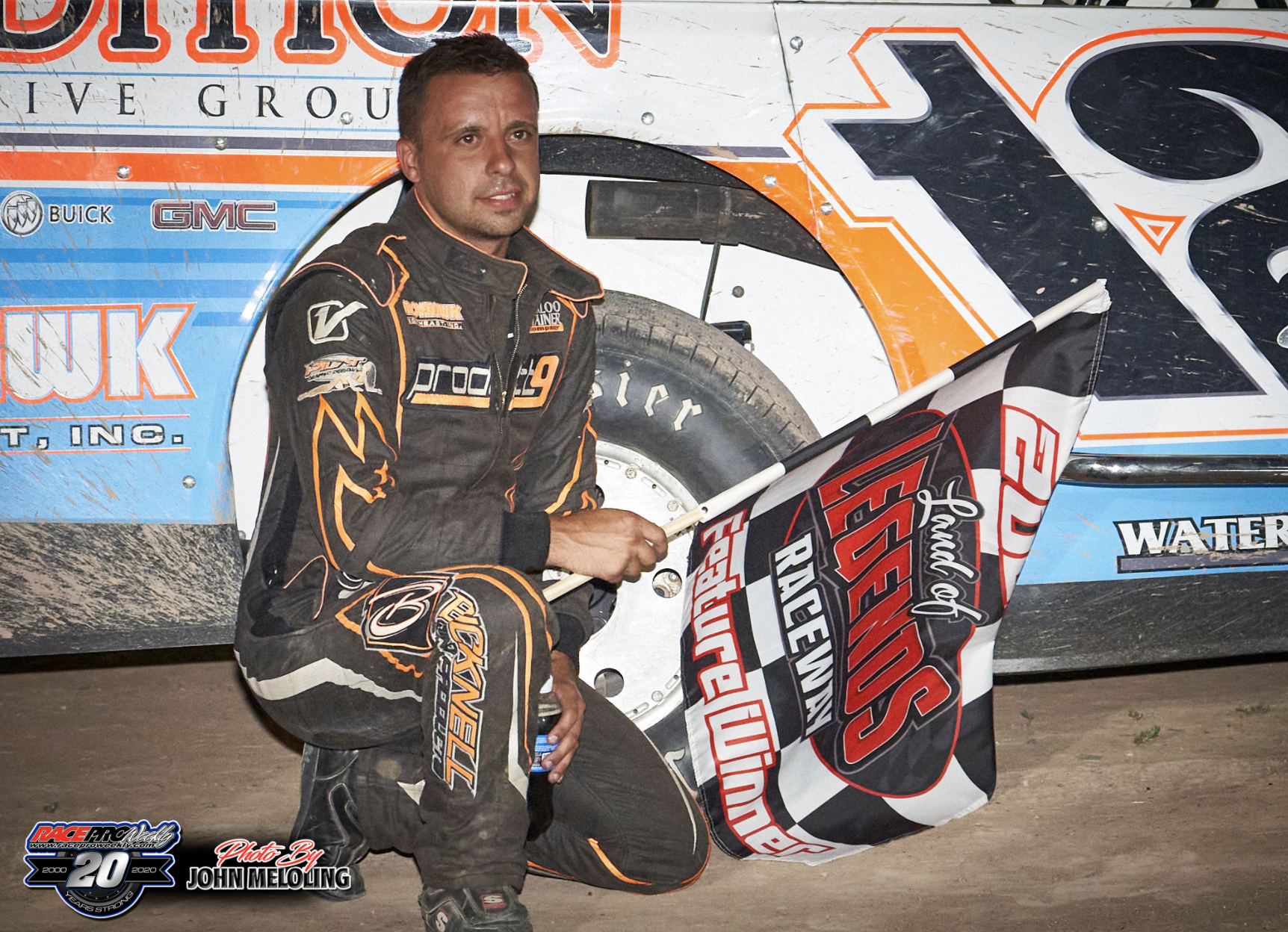 Matt Guererri in his sleek DIRTcar Sportsman Modified to Victory Lane at Land of Legends once again. 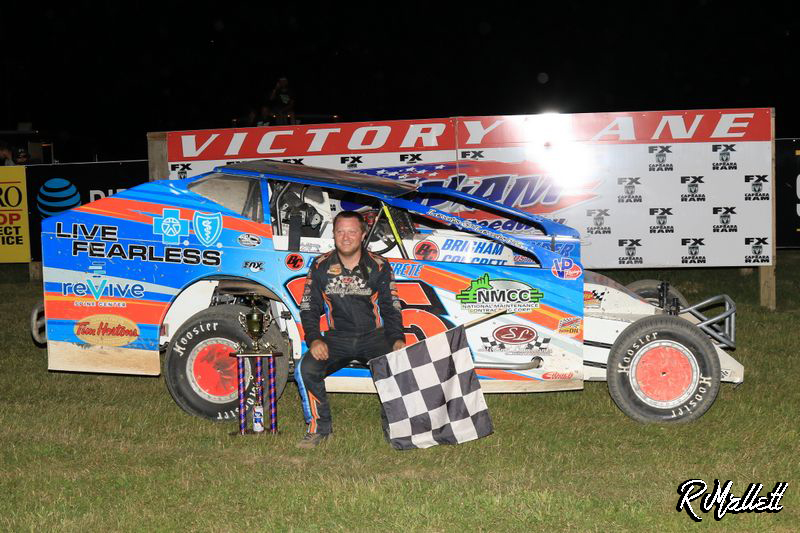 It was Erick Rudolph over Tim Fuller and Lance Willix Jr. in DIRTcar 358 Modified competition. 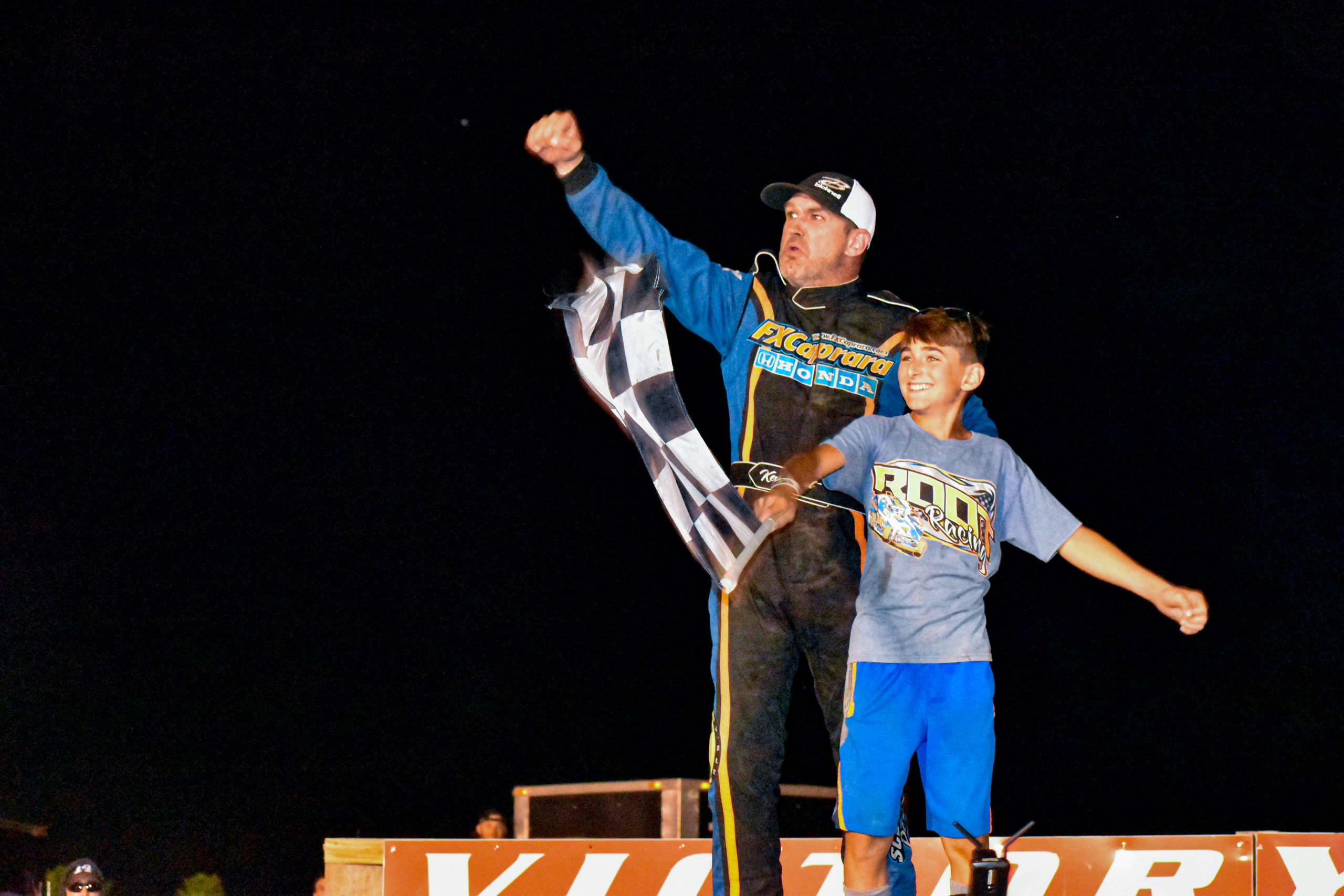