Weedsport, NY — Don’t let the name fool you. Everybody knows that the late,

great Catamount Stadium in Milton, Vermont was a phenomenal asphalt track. But, its

cyber survivor, www.catamountstadium.com, is one of the best modified history sites —-

dirt or blacktop —- anywhere on the world-wide web.

As such, the proprietor of the site, Bill Ladabouche, has been named as the 2011

The epicenter of Ladabouche’s site is central Vermont, present home of the

Devil’s Bowl and Bear Ridge mod speedways. However, his site digs deeply not

only into Vermont racing history, but also into the lineage of tracks and surrounding

states and provinces which customarily sent “invaders” into Vermont on a regular basis.

text, www.catamountstadium.com is a virtual museum and is undeniably one of the best

“I was blown away the first time I visited Bill’s site,” observed DIRT’s Hall of

Fame Chairman Gary Spaid. “Bill has a treasure trove collection of pictures and is a

meticulous researcher when it comes to content. I could only wish that every corner of

the dirt modified racing universe had a history caretaker like to Bill Ladabouche.”

A school teacher by profession, Ladabouche got interested in racing at a

Vergennes, Vermont, Pico and Fairmount speedways near Rutland, Vermont, and

Stateline speedway near Bennington, Vermont. It was the subsequent road trips to

neighboring ovals like Fonda, Lebanon Valley, and Plattsburgh which hooked him for

life. Ladabouche’s specialty is documenting long-lost formative speedways, some of

which has been closed for forty or fifty years. He also writes the historical column for

Ladabouche, age 64, lives in Swanton, Vt. and has taught fifth and sixth graders

in the Milton, Vermont area for 41 years. He began attending races at Pico in 1951 and at

an early age began archiving his trips to the tracks with snapshot photography.

He became inspired by the website work of retired driver Otto Graham, and

started his own www.catamount.com site in 2005. “I found almost nothing on the internet

about Catamount, and that troubled me, given the important role it had played in racing’s

history.” So he started the site and soon branched into all things impacting Vermont

racing, including other asphalt tracks and anything dirt. He dedicates his work to

Ladabouche’s induction will take place Sunday May 29, 2011 at the DIRT Hall of 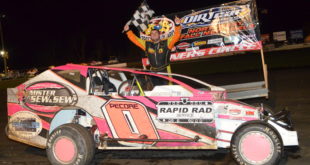