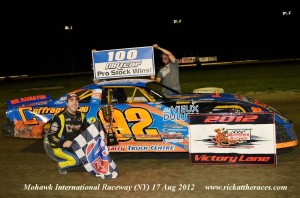 After problems in the qualifier put him last in his heat, Ladouceur started at the tail for the 35-lap feature, the final of 3 races in the Bailey Motor Company Pro Stock Series. However, the 2011 DIRTcar Pro Stock Series champion took the poor starting position as a challenge to be overcome, charging ahead of early race leaders George Renaud and Stephane Lebrun for his landmark 100th DIRTcar Pro Stock victory.

“It was fun to win one that way,” said Ladouceur, who feels comfortable racing Mohawk’s 4/10-mile semi-banked oval.

“I’ve always run well at Mohawk,” he said. “I guess I just go there, kind of relax, and I know the track well, so I make the most of it.”

The pressure has been on for Ladouceur ever since he achieved his 99th career DIRTcar Pro Stock win Sunday, July 22, at Cornwall Motor Speedway. Since that DIRTcar Pro Stock Series event, the tension has been building as fans watched and waited for number 100.

“I got 99 about a month ago and it seems like all summer everyone’s asking me about my 100th,” said Ladouceur, who began to wonder if he could reach the lofty goal. “I doubted I could win again.”

Ladouceur expressed gratitude for everyone who made all 100 wins possible.

“I want to thank all my friends, family and sponsors, new and old, that have helped me get to that point,” he said. “You don’t do it alone. There’s a lot of sacrifices, a lot of late-nights in the shop, and a lot of hours spent to get to this point, so hopefully all those people can, even if they’re not with me anymore, they can know that.”

This impressive landmark victory is especially important as Ladouceur and his team consider transitioning to the DIRTcar Sportsman Modified division.

“It’s almost like you hate to quit when you’re up to 99,” Ladouceur said. “At least now we can move on, and if we do move up we don’t have to move up without missing the milestone.”