On Saturday, April 19 it was Louie Jackson’s turn to top the charts as he scored the win in the 2008 Mr. DIRTcar Pro Stock Series opener at Can-Am Motorsports Park in LaFargeville, New York.

An ideal forecast greeted the 23 UMP/DIRTcar Pro Stock competitors, all seeking the opportunity to be the first name on the 2008 Series winner’s list.

Denis Gauvreau and Don Barnes led the pack to starter Matt Burdick’s initial green flag and it wasn’t long before Gauvreau built up a commanding lead. Defending Mr. DIRTcar Champion Pete Stefanski and Roch Aubin were waging a battle for the runner-up spot by the end of the second circuit, with Jackson moving into the same pack as the leaders by lap three.

The #99 machine of Mike Martin rolled to a stop and ducked behind the third turn barrier on lap four while Joey Ladouceur, Dion Oakes and Stephane Lebrun waged a fierce battle for positions eight through10. Gilles Godard took his #27 entry pitside on lap eight and by the time the pack had crossed the stripe to put 10 laps in the books, Jackson had taken over the runner-up spot.

Alexandria, Ontario’s Joey Ladouceur slowed the field and then brought his #92 mount to the attention of his crew for a new right front tire on lap 12. The 2004 Mr. DIRTcar titlist then took his place at the back of the pack for the restart along with Godard, who had rejoined the fray, albeit two laps down.

The next yellow flag came out on lap 14, when Wallkill, New York’s Robert Rowe slowed to a stop on the high side of the backstretch. Track officials retrieved what they believed to be the driveshaft from the #09 car that rested alongside the front stretch wall.

On lap 17, Jackson took a peek to the inside of Gauvreau and the pair ran nearly side-by-side until the #18 forged the final lead change on lap 20. A final yellow flag appeared on lap 23 to remove Jody Swamp’s damaged racer from turn three but Gauvreau couldn’t do anything with Jackson. Stefanski, P.J. Peters and Aubin completed the top-five at the checkers.

FULL FENDER FOOTNOTES
The first two heat races ran from green to checkers. In heat race three the first yellow flag of the night flew when Ricky Thompson’s #37 car slowed to a stop on the inside of turn four on the first circuit. A second yellow flag was displayed on lap three as the #BA98 of Steve Johnston lost a right rear tire and came to a stop along the front stretch wall.

2008 Pro Stock Series Competition Director Brian Mulligan told announcer Shane Andrews (on loan from Fulton Speedway) that his goal for this year is to expose the full-fender crowd to more faces by having more races in more places. Mulligan, a long-time employee at Cornwall Motor Speedway, said he’d like to see the Pro Stock division become just as popular as their DIRTcar Modified cousins…Joey Ladouceur recalled the last time the Pro Stock Series had raced at Can Am was ‘about 4 years ago’, during a daytime show. He said he liked the outcome of that race —he won— but hoped track conditions would be much better this time around. 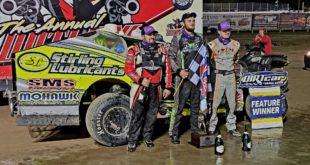 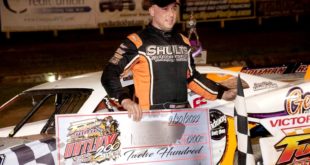 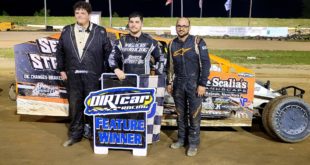