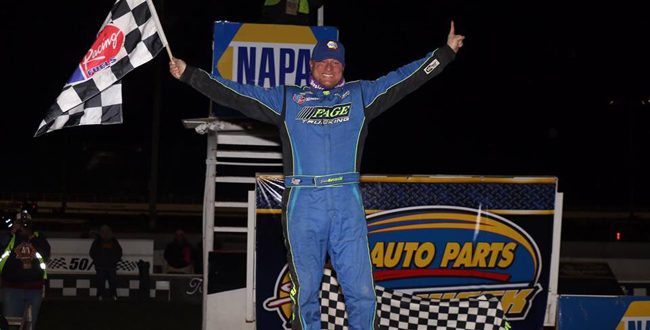 OSWEGO, N.Y. – Oct. 9, 2016 – Dave Marcuccilli battled the rigor of an extended race program Sunday night to win the DIRTcar Racing Sportsman Chevy Performance 50 Championship at Oswego Speedway. Sunday was not only a make-up day for the adverse weather, but also the finale for the prestigious 45th running of the NAPA Auto Parts Super DIRT Week. Marcuccilli and company did not disappoint as the jam-packed crowd at the Clay Palace gave the week’s last feature event a standing ovation.

The 30-car feature event was comprised of more than 60 percent native New Yorkers. Cayuga, N.Y. driver David Marcuccilli led the field into the green flag for 50 laps courtesy of recording the fastest lap in time trials with a 23.451.

In a nine-caution marathon, not one Sportsman driver conserved their racecar. When the green flag waved, the two rows of 15 cars merged – some wasting no time to rub fenders with each other. Rocky Warner, who recorded the third fastest lap in time trials, made his push to the top from third place. The only driver separating him from leaving Oswego on a high note was Tyler Meeks.

It only took the race’s first restart for Warner to jump the gun on Meeks. Warner took the spot within moments, and diminished Marcuccilli’s lead to 0.187 seconds before another caution put a hold on his growing momentum. Thereon, Meeks dropped back to the bubble spot of the top five.

“There was a lot of give and take out there,” Warner said. “

The caution also wreaked havoc on Marcuccilli, as he momentarily lost second position to series front-runner Ron Davis III. In the following cautions, Marcuccilli successfully fought off Davis. Davis eventually spun-out in turn three of the closing laps, placing 15th. Marcuccilli on the other hand was still in the running.

Marcuccilli and Warner had a classic barn-burner that almost went the entire length of the race. That is, until Warner connected with the turn one wall; there was clear mechanical damage after the impact. Warner held his ground, but lost enough for Marcuccilli to reclaim his place at the top.

“Oh man, that was tough, Marcuccilli said. “What a race that was, man. What a wrestling match I had with the car the entire race. We were way too tight, and I think Rocky was tighter than me. He started having issues or whatever was going on. I saw him struggling and was lucky enough  to be able to hang with him.”

While Warner faded, Greg Martin made the charge to second. Martin recorded the fastest time in the Sportsman Futures earlier in the week, and in this particular feature climbed his way up from 11th.

“Yeah, it’s always fun when you get to run with guys like these,” Martin said. “They run clean and they run good. We’re just glad we had a cr strong enough to get up to second.”

Three cautions in the final few laps created a green-white-checkered situation. Though this revitalized drivers’ chances, Marcuccilli was able to hold-off the field. Martin settled for third, while Warner limped into the final podium spot.

“Rocky is a shirt off your back kind of guy,” Marcuccilli said. “If you need anything, he’ll give it to you. Like I told him, I bought him Red Lobster last night and told him that I needed to get my car turning right…and it worked.”

Marcuccilli is the first ever Sportsman driver to win a feature event at Oswego. He said to sit on the pole and survive the strong field is an experience that is unforgettable. He earns a $4,000 purse.