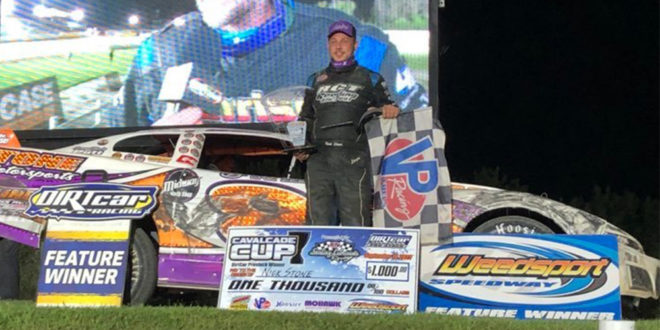 Stone, of Rotterdam Junction, NY, took the lead in the early stages of the 30-lap Feature and never looked back.

Pete Stefanski emerged as an early challenger, battling side by side with Stone after a Lap 3 restart. However, Stone had the better traction on the slick track and pulled ahead.

Finding that traction was initially a challenge, though, according to Stone.

“You’ve got to try and stay smooth on these slick racetracks,” Stone said. “I was extremely tight in the beginning. I couldn’t hold it on the bottom. I kept looking at the screen to make sure I was pulling off Turn 4 ahead of [Stefanski]. I’m like, ‘Jeez, we need to get this car on the bottom one way or the other.’

Once Stone cleared Stefanski and mastered the bottom line, he led the field the to finish.

The victory is Stone’s third Series win at Weedsport and fourth of his career.

The DIRTcar Pro Stock Series continues its tour at Mohawk International Raceway on Saturday, Sept. 17. The Series is also less than a month away from the prestigious DIRTcar Pro Stock 50 during the 50th Running NAPA Auto Parts Super DIRT Week at Oswego Speedway, Oct. 3-9.