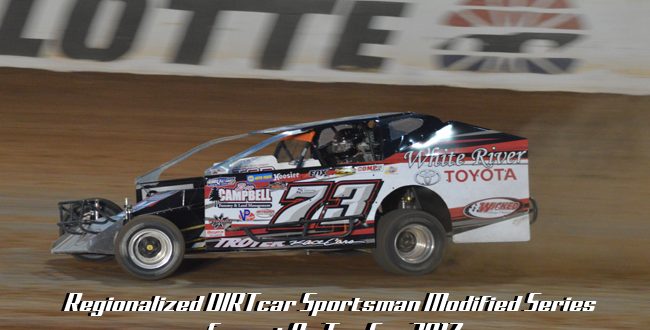 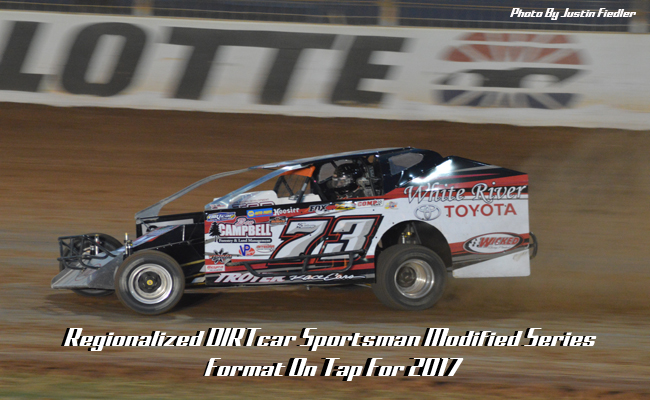 CONCORD, N.C. – Jan. 14, 2017 – On the heels of a strong season in 2016 that saw over 230 different DIRTcar Sportsman Modified drivers compete in 15 series points shows, DIRTcar Racing officials will unveil a new format for Sportsman Modified teams in 2017.

Currently,23 different tracks have signed up for DIRTcar Sportsman Modifieds Series with negotiations ongoing for additional dates. To accommodate the increased demand, tour events being scheduled from the last weekend in April through late-September will be run under a regional format, with the schedule divided into four regions – North, West, Central and the East, which was announced earlier today will be a part of the King Of Dirt tour. DIRTcar Sportsman Modified Series teams will only be required to participate in a region of their choice in order to earn valuable series points. Point races run in other regions will become optional events for teams.

Home Track Bonus Points awarded for participating at one of the many DIRTcar Racing sanction tracks is again the foundation for the 2017 schedule. Bonus points from the regional DIRTcar Sportsman Modified Series will be added to a driver’s home track total on September 25. In addition to 1,000 Series bonus points, each regional points champion will earn a guaranteed starting spot at the Super DIRT Week Sportsman Championship at Oswego Speedway as well as a preferred starting spot in the OneDirt.com World Short Track Championship at the Dirt Track at Charlotte.

Drivers may compete in as many DIRTcar Racing events as they choose and may earn additional points toward the championship by competing in events out of their region (20 points per attempt up to a maximum of five totaling 100 points). These points will be added to a driver’s home track and regional bonus total.

Central New York and Brockville, Ontario will be the final battleground for the DIRTcar Racing Championship when the calendar reaches fall. All regions will converge for a five event “Fall Championship Challenge” –  bringing the best of the best together into one five-race chase for the championship. Mandatory 150 point-to-win races will be on tap for Sportsman Modified teams during a busy week-long stretch beginning with Fulton Speedway’s 32nd Outlaw 200 Weekend on September 29th & 30th, Weedsport Speedway on Wednesday Oct. 4, Brewerton Speedway 25th Hurricane, Thursday, Oct. 5 and the the 75-lap Super DIRT Week Championship at Oswego Speedway on Sunday, Oct. 8th. These events will build to the final series showdown for the DIRTcar Sportsman Modified Series crown on Friday, October 13 at Brockville Speedway for the Fall Nationals.

“We feel this will allow teams to run good paying races within region throughout the season and earn valuable points without a heavy travel burden,“ said Mike Perrotte, DIRTcar Director of Series and sanction. “Then to have them all converge into the same sand box for the Fall Championship Challenge allows teams to race against racers from other regions for all the marbles.”

“There has been a high demand for series races from track promoters and a lot of interest from race teams since we ended the series last fall,” said DIRTcar Sportsman Modified Director, Cory Reed. “The series includes major events and great race tracks.”