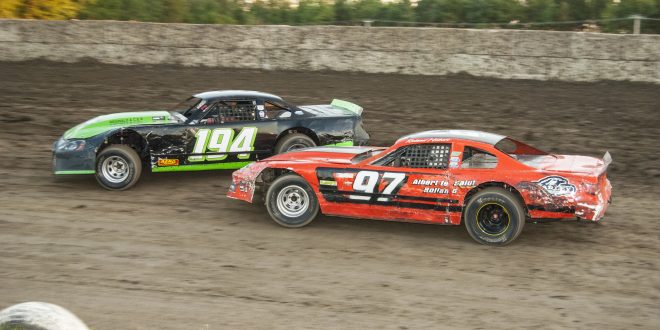 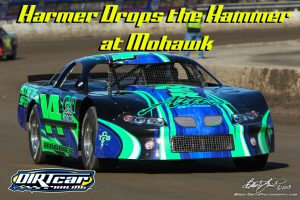 Sid Harmer Jr. gets lead on lap 48 to capture first tour win of his career!

Hogansburg, NY, – Sept 14, 2018 – It was a typical full fender battle in the DIRTcar Pro-Stock series race during the Mohawk Nationals at Mohawk International Raceway as the Pro-Stock were in town for their lone trek as Can-Am Speedway star Sid Harmer Jr came on top after a heated end of race.

Harmer Jr was all smiles in the winner circle after collecting a big win: ‘’It is my biggest win of my career!” were the first words that Harmer said! “I wish the Pro-Stock would be back at the track, I would be back every week! Added Harmer speaking about bringing the class back to the speedway on a regular basis. He also talked about the last pass of the race: ‘’Too bad for the 88, I think he spun by himself, while we were racing hard, it’s unfortunate and it is what it is” closed Harmer Jr after winning a first DIRTcar Pro-Stock Series win in his career.

Rock Aubin set the early pace in the 50-lap event over Sid Harmer and Jonathan Viens. The latest winner in the series, CD Beauchamp made his way to third, passing Viens on lap 4.

Harmer was charging the backbumper of the leader as they headed to 10 laps completed. A great battle for the lead as Beauchamp found something on the top lane and passed both Harmer and Aubin coming into lap 15.

Pulling double duty tonight, Ryan Stabler brought the caution on lap 16. The top 3 remained the same when the green lights were back

Former Mohawk track champion, Stephane Lebrun was challenging for a podium position by lap 20 as he ran side by side with Rock Aubin.

Lebrun found something in the middle of speedway and battled Harmer for second at halfway point as Beauchamp gained a little bit of ground in first. Harmer was back into the second spot on lap 30 with Lebrun remained in third.

Harmer tried everything to pass Beauchamp as both racers were at the same pace around the Mohawk circuit with 10 laps to go in the event.

The leaders ran into lap traffic with 5 laps to go in the event, Harmer was pressing hard on the leader as they race with two other competitors with two to go, Beauchamp spun on the backstretch and caution was out on lap 48.

The DIRTcar Pro-Stock Series will head to Fonda Speedway next Saturday, September 22nd for the Mohawk Valley 50 before everyone gets ready for NAPA Auto Parts Super DIRT Week 47 for the 75-lap feature.