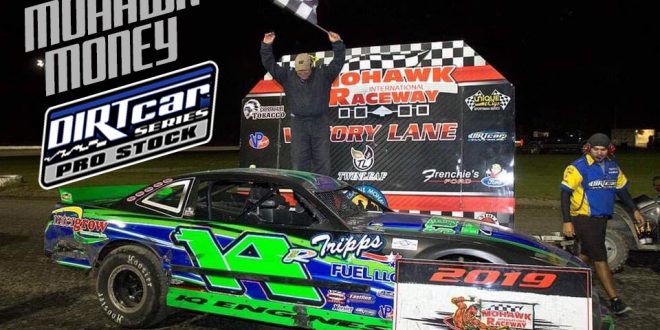 HOGANSBURGH, NY – September 13, 2019 – The DIRTcar Pro Stock Series got back to action at Mohawk Int’l Raceway on Friday night. Sid Harmer Jr. led thirty-five laps to capture the checkered flag and a $1,000 paycheck.

Sid Harmer Jr. took advantage of the inside lane at the start of the 35-lap DIRTcar Pro Stock Series event as he led the opening 7 laps over Nick Stone, Stephane Lebrun, Jay Corbin, and C.D. Beauchamp.

The track was tricky but Harmer had a dominant race car as he pulled away and looked to hide from a strong field of Pro Stocks.

At the halfway point Harmer was in full control and continued to lap cars with no issue as behind him Nick Stone held second and Lebanon Valley Speedway regular Jay Corbin made a big move to take the number three position.

2019 Cornwall Track Champion Stephane Lebrun made a costly error, slipping up and allowing Corbin to get by.

As the laps clicked off Sid Harmer Jr. proved to be too much for the field and went unchallenged throughout the entire event to record his second career DIRTcar Pro Stock Series win and his second in a row at Mohawk.

The next DIRTcar Pro Stock Series race is on Saturday, September 21 at Albany-Saratoga Speedway.