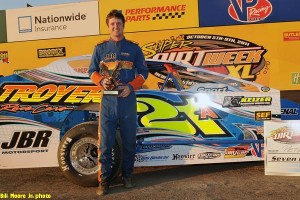 Britten, a rising 23-year-old talent who left his native Brisbane, Australia, to spend the 2011 season racing fulltime on the DIRTcar Modified circuit, made history in the 20-lap Big-Block Modified Futures event. He led from start-to-finish to become the first driver from Down Under to win an event during Super DIRT Week.

“It’s a pretty special moment,” said Britten, who earned $750 for his efforts behind the wheel of a Troyer car. “It’s great just to get 20 laps around this place because obviously we’re a newcomer here. We’ve only had four- or five-lap sessions for practice, so getting 20 in this race was brilliant.

“Our weekend has started off pretty good so far. Let’s hope it continues.”

Blewett, 31, shined in the 15-lap, 14-car 358-Modified Futures race, steering his red-and-white machine to a 1.274-second victory over Jean Boissonneault of Granby, Que. The checkered flag brought Blewett a $600 payoff.

A standout asphalt Modified racer for more than decade, Blewett decided to try his hand at dirt-track action in the Big-Block Modified division this season at New Egypt (N.J.) Speedway. He progressed enough to put together a 358-Modified effort for Super DIRT Week and has found the competition on the Moody Mile agrees with him.

“I really like this dirt stuff,” said Blewett, who has received dirt-racing tutoring at Syracuse this week from such names as defending SEF 200 champion Stewart Friesen, Fonda (N.Y.) Speedway star Ronnie Johnson and Teo-Pro Car’s Matt and Bobby Hearn. “It’s interesting racing here. It’s about 50/50 – you gotta drive 50 percent like a dirt car and 50 percent like an asphalt car.”

An amazing 45 drivers registered for Futures action in the DIRTcar Sportsman division, prompting officials to split the field into two $400-to-win 12-lap features.

McPherson, a 19-year-old who competes regularly at Ontario’s Merrittville and Humberstone speedways, controlled the first Futures event. He beat Don Spatorico of Ransomville, N.Y., to the finish line by 3.068 seconds shortly after turning heads around the Fairgrounds by registering the second-fastest lap in time trials for Saturday’s DIRTcar Sportsman Championship 30.

At 17, Hackell was the youngest of the Futures winners after capturing the second Sportsman feature. The fourth-generation driver ran away with the event, beating Kyle Wilson of Joyceville, Ont., by a convincing margin of 6.190 seconds.

The oldest Futures winner was Achzet, a 48-year-old from the Mohawk Valley who topped the 10-lap Pro Stock headliner. He triumphed in the tightest race of the day, beating David Chenette of Mooresville, N.C., by just over half a second.