The premier Big-Block Modified series opens the action at the high-banked quarter-mile on June 30followed on July 1 by the DIRTcar 358-Modifieds, DIRTcar Sportsman Modifieds and DIRTcar Pro Stock series.

Last year’s Super DIRTcar Series winner at Cornwall, Chris Raabe, made his way to his first Super DIRTcar Series Victory Lane behind the wheel of a small block. This year, he anticipates such a competitive field of drivers that it may be tough for many racers just to qualify for the redraw.

“Last year the big names were lucky enough to get in the redraw. For these races, half the battle is getting a decent starting spot,” said Raabe, who as a 358-Modified Rookie in 2011 won a track championship at Mohawk International Raceway. “There are so many good guys, it’s hard to come to the field these days. Last year we were lucky to get a good starting spot, and we had a pretty balanced race car, so we were able to stay up front the whole race.”

Raabe, of Napanee, Ontario, made the last year’s redraw after a third-place finish in qualifying heats, drawing the third starting spot, passing Danny Johnson and Bobby Herrington for the lead and fending off late-race challenges from Mario Clair.

“It was pretty big for us last year. It’s always exciting to win when all the big guys are there,” Raabe said. “A lot of these guys – Brett Hearn, and a lot of those other guys – I look up to them a lot, and it’s fun to race with them.”

Although Cornwall does not race Big-Block Modifieds regularly, Raabe said the local 358-Modified racers are ready to, once again, put up a strong fight against the series regulars.

A rookie this year in the Sportsman Modified division, Joey Ladouceur has already logged countless laps atCornwall Motor Speedway in a Pro Stock, and is ready to challenge Cornwall Sportsman Modified standouts Chris Herbison, Corey Wheeler, and others.

“I’m shooting for the top 5, that would be good for me, but with the amount of experience and wins I have atCornwall in Pro Stock, maybe that’s enough to shake one out,” Ladouceur said.

“It wasn’t as drastic of a difference as I thought,” Ladouceur reflected on his first Sportsman race atCornwall. “The handling of the cars is different. But with the characteristics of that track – it’s such a small track and the grooves are very distinct, so we were able to pick up the line pretty good. Obviously, I still have to get used to the type of car, so that’s why there’s still a little speed left to be had, but we’re definitely competitive right out of the box.”

For more information about the Canada Day DIRTcar Weekend Blast at Cornwall Motor Speedway, visit the track website at www.cornwallspeedway.com or call (613) 938-3945. For the latest news and updates about the Super DIRTcar Series and other DIRTcar Northeast traveling series, follow @DIRTcarNE on Twitter or “like” the DIRTcar Racing Facebook page. 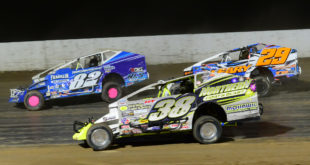