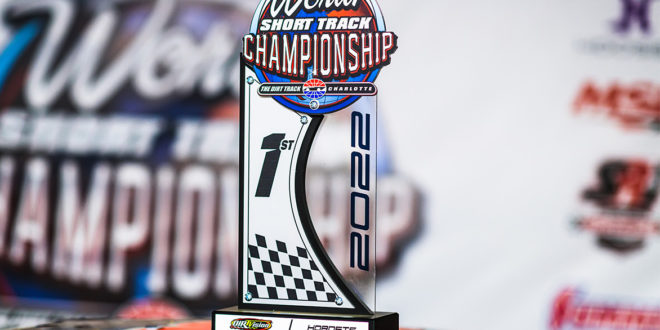 With 55 Hornets entered for the division’s marquee event, the field was split into three 15-lap Features Friday night.

Zack Slone, in his first ever World Short Track Championship start, claimed his first event victory in the first Feature, while Newman Presnell and John Windham returned to Victory Lane in the proceeding two.

Here is how each Feature played out…

FEATURE #1
When the green flag flew for the first DIRTVision Hornet Feature of the night, Seth Smith earned the title as the first Hornet driver to lead a lap this weekend. However, his claim to the lead was short lived.

After a restart on Lap 4, Smith became prey to two starving hunters. Brad McManus and Zack Slone stayed within inches of Smith on the restart, making a tight three-way battle for the lead.

The trio dueled for multiple laps before McManus and Slone overpowered Smith for the top two spots.

Ripping the high side of the 4/10-mile track, about bicycling his car every lap with the left rear leaving the ground on corner entry, Slone found an opening to the outside of McManus and passed him for the lead by the halfway point of the race.

With four laps to go, Smith suffered an issue, bringing his car to a stop in Turn 4, and brought out a caution. On the restart, McManus looked low on Slone into Turn 1, but Slone had the better momentum up top and drove away with his first career World Short Track Championship victory.

“It feels amazing, man” Slone said, trying to catch his breath with every word. “Literally built this motor… had it built last week and blew it up in four laps, rushed to get it together for tonight and bring it out here and win in my first try. It feels great.

“I’m known for finishing second a lot. Leading the whole race and losing it on the last lap. I’m happy to finish it off this time.” 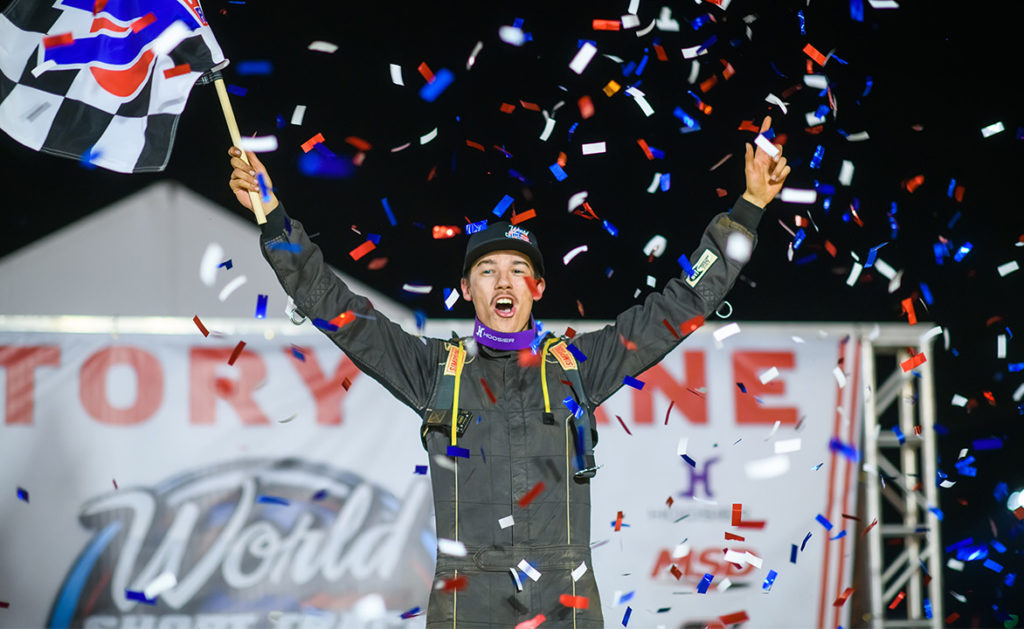 FEATURE #2
After crowning a first-time DIRTVision Hornet World Short Track Championship winner in first Feature, a multi-time winner reigned supreme at the conclusion of the second.

When the second Feature commenced, polesitter Wayne Taylor could barely get a step ahead before being pulled into a battle for the top spot by Cale Deese and Newman Presnell – who had already worked his way from fifth to third.

Deese edged ahead of them down the backstretch to claim the early lead. However, his moment of glory was also short lived. After stalking Deese for a couple laps, Presnell threw a slide job into Turn 3 and cleared Deese by the next turn.

From there, Presnell – who won both of his World Short Track Championship Hornet races last year – put his #48 car on cruise control and drove to his third straight Dirt Track at Charlotte victory.

“We had a pretty good car,” Presnell said. “We won here last year in both our races. I knew we had a good car and a good setup. Just stay smooth. Fifteen laps. That’s a lot of time to make it to the front. The track is big and wide. Just stay smooth. Stay consistent. Run my own race and it worked out good for us.” 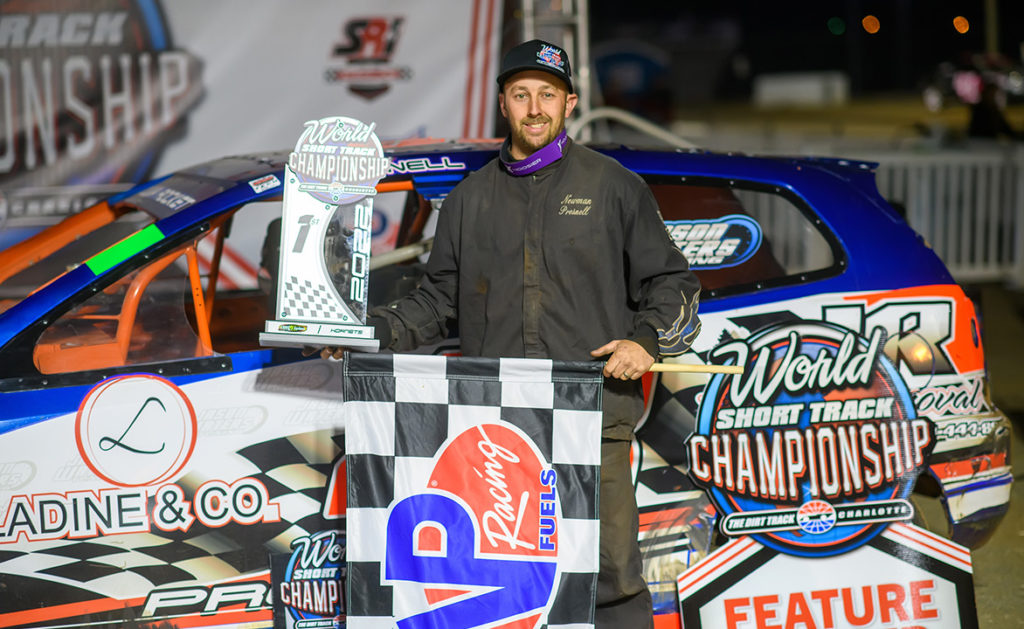 FEATURE #3
The war for a World Short Track Championship win continued into the final DIRTVision Hornet Feature of the night, with John Windham and Dan Benson breaking out the boxing gloves in the opening laps.

When the cars exited Turn 4 and saw the green flag on the initial start, Windham dove underneath Benson into the first corner. Inches apart, and at times rubbing fenders, the two ran side by side the first lap, arguing over who would sit on the Victory Lane throne.

Windham got the advantage their second time around the track, pulling ahead of Benson for the lead in Turn 3. But keeping his foot in the throttle, Benson stayed on Windham’s rear bumper through the corner, nearly getting his rival out of shape.

Windham managed to keep control of his car and power away from Benson once he found clean air. Then, he continued to put seconds between them.

In the closing stages of the race, Benson, again, found himself in a side-by-side battle to defend his spot. Chris Harrell, who started 18th, had been on a charge all race. He found himself in the top 10 on the first lap and then methodically worked his way forward. He caught Benson by the halfway point and eventually stole second with five laps to go.

By that point, Windham was too far ahead for Harrell to try and catch.

While everyone dueled for positions, Windham was making qualifying laps and crossed the finish line with a more than four-second lead to claim his second World Short Championship victory.

“It felt good,” Windham said. “It wouldn’t get through the center real good. But it was fast. It felt good.” 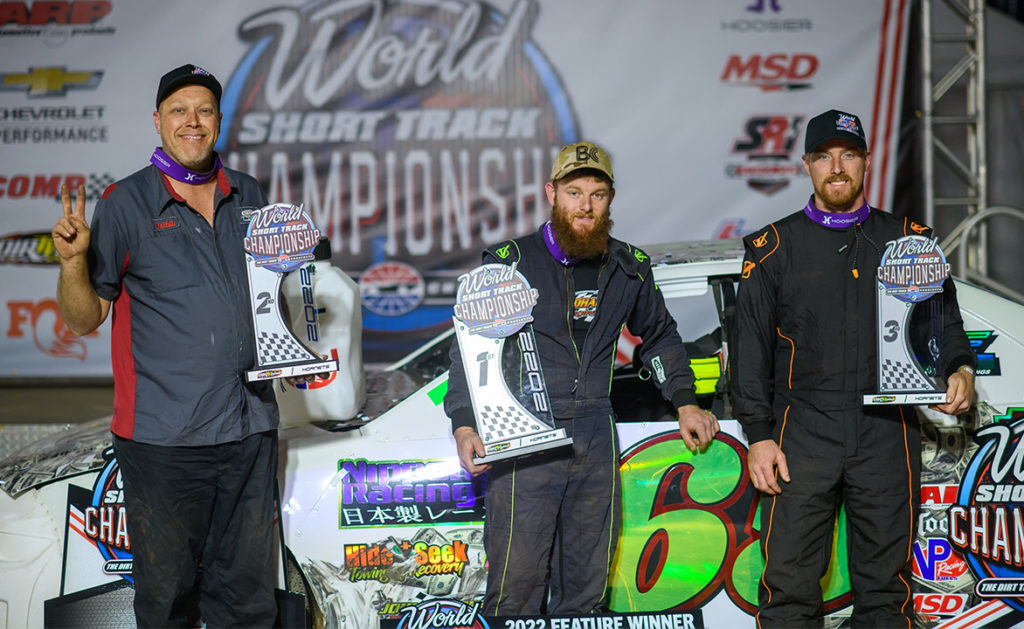 UP NEXT: The DIRTVision Hornets will run three more Features on Saturday, Oct. 29, to conclude the seventh annual World Short Track Championship. For tickets, CLICK HERE.

If you can’t make it to the track, you can watch the full day of racing, starting at 4pm (ET), live on DIRTVision – either at DIRTVision.com or by downloading the DIRTVision App.