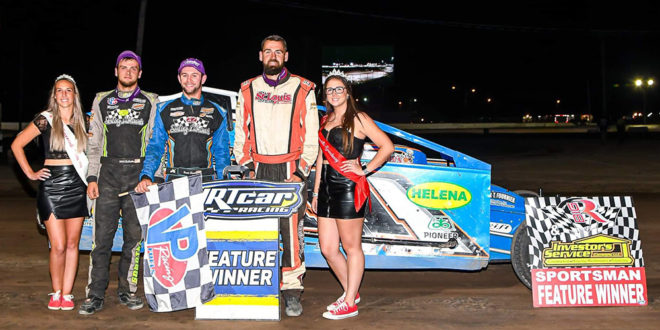 Ransomville-native Brett Senek sat comfortably on the throne of his home track again Thursday night with the DIRTcar Sportsman.

He dominated the 30-lap Mike Bonesky Memorial at Ransomville Speedway, leading from green to checkers, fending off every challenge that came his way with ease. While it was his third win of the year at Ransomville – where he’s the three-time and defending champion – the victory was his first with the DIRTcar Sportsman Series in 2022.

“Starting on the front row definitely helped, it was big tonight,” Senek said. “But I had one heck of a hot rod tonight. I can’t thank Johnny Coco, Randy Williamson, enough for giving me advise, trying some new stuff tonight. The thing was a rocket.”

Behind him, Cody McPherson settled for second, Zach Sobotka finished third, Nelson Mason was fourth and Dave DiPietro rounded out the top five.

Senek launched ahead of Mason at the start of the Feature, pulling ahead by more than three seconds in the first 11 laps. But then, the first caution of the night flew for a slow car, brining the field back to Senek’s bumper.

His stellar restart was called off in seconds when multiple cars tangled in Turn 1, bringing the yellow back out. When the race successfully resumed, Senek had another strong start, gapping the field, but behind him Sobotka was making an aggressive drive forward. Throwing his car to the outside of the 3/8-mile speedway, he powered his way by Mason for second.

However, Senek’s speed up front was still unmatchable.

Sobotka’s best shot at dethroning Senek came after a caution with 12 laps to go. The two lined up side-by-side on the restart – Senek high and Sobotka low – and when the green was shown again, Sobotka waited a few extra seconds to lift out of the throttle while entering Turn 1, sliding up the track in front of Senek and holding the lead for a second.

Senek drove back underneath Sobotka down the backstretch and launched back to the lead in Turn 3.

After Sobotka’s failed slide job attempt, he found himself under attack from McPherson. The two battled side-by-side multiple laps before McPherson was able to get the advantage. Then, he turned his attention to cutting into Senek’s lead.

His move into second was already a successful turn of events as he’d hit the wall 10 laps into the race.

“The single-file restart, you couldn’t see much going into (Turn) one and all of the sudden I was heading toward the wall,” McPherson said. “Luckily we didn’t do too much damage and where able to battle back.”

While he was able to cut tenths off Senek’s lead in the closing laps, hoping for a caution to see if he had anything for the track champion, Senek’s mastery of Ransomville Speedway ultimately prevailed.

His victory counts toward the Central and Western DIRTcar Sportsman divisions as the Mike Bonesky Memorial was a joint event for the two regions.