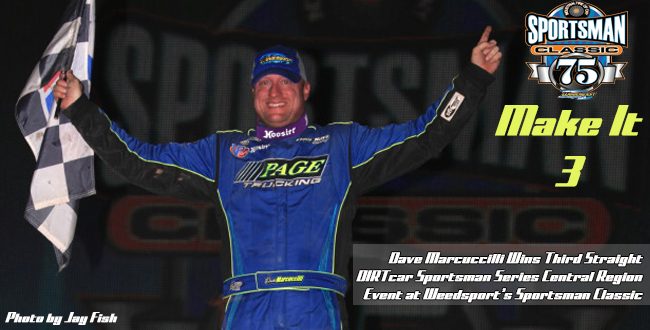 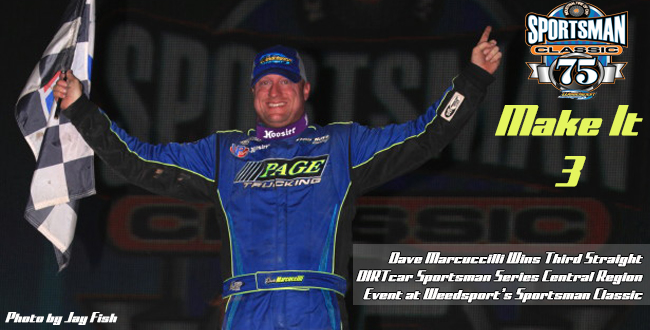 WEEDSPORT, NY (July 4, 2017) – Dave Marcuccilli dominated the Sportsman Classic 75 presented by Industrial Tire of CNY at Weedsport Speedway on Monday evening, becoming the first driver to win the $2,500 Sportsman crown jewel twice. It was also his third straight win with the DIRTcar Sportsman Series Central Region, a streak that began back on June 20 at Outlaw Speedway.

Starting from third position, Marcuccilli took the lead from Glenn Forward on lap 14 and never looked back, out running Rocky Warner and Corey Barker in the late stages for the score in the Super DIRTcar Sportsman Series event.

Schilling won the 10 lap B-Main presented by Universal Sales & Accessories and opted to start the Classic from 31stposition as opposed to taking the $300 prize.

A total of 65 DIRTcar Sportsman were in the pit area on Monday with 25 cars starting the 10-lap non-qualifier B-Main.

Forward and Clark started the 31-car, 75-lap Classic, from the front row with Forward racing to the early lead in the No. 7C.

With Forward out front, it was Marcuccilli and Trump making moves early on as Marcuccilli immediately fell into the runner-up position with Trump racing from sixth to fourth by the race’s fifth circuit.

As the traffic grew, Marcuccilli and his No. M1 machine looked more and more as the car to beat and it was proven on lap 14 as Marcuccilli slid under Forward for the top spot in turn four.

Marcuccilli immediately built a sizeable lead while Rocky Warner, Corey Barker, and Ronnie Davis III began their march through the pack. All three started deep in the field with Warner coming from 15th, Barker from 20th, and Davis from 28th. Warner had found the seventh position by lap 20 while Barker and Davis were creeping toward the top ten.

The night’s first caution would wave on lap 20 for a slowing Nick Krause, who would be done for the night. When the field came back to green Marcuccilli led

Unfortunately for Root his top ten run would end on the restart as he tangled with Alan Fink coming to the green, bringing out another caution.

Once back underway Marcuccilli and Forward continued their drive out front as Ridley began to put himself into position in the No. 20X.

One by one Ridley pressed into the top five passing Trump on lap 23 and then Guererri on lap 26 to work into the fourth position before the night’s third caution fell on lap 33 for Kyle Inman, who found the back-stretch wall.

On the restart Marcuccilli continued to show the way ahead of Forward, Clark, Ridley, Guererri, Trump, Warner, Barker, and Pecore.

Just passed halfway Marcuccilli, Forward, and Clark continued to hold court but Ridley and Warner were on the hammer behind them. Making his way by Guererri and Trump, Warner next picked off Ridley at lap 47 before diving under Clark for third on lap 54.

Behind Warner and Ridley it was Barker and Davis seemingly working in unison as they edged closer to the top five as the laps ticked away.

Maruccilli, Forward, and Warner were now the front runners, and they were spaced evenly at the front of the pack. Ridley wanted to join the party and on lap 60 finally worked by Clark to hit fourth. As he tried to give chase to the top three.

Another caution hit the Speedway at lap 62 for a spinning Jackson Gill, which tightened the field for a dash to the checkers.

Warner used this restart to beat Forward for the second position as the Barker No. 31 was shot out of a cannon further behind, sliding into fourth at lap 67.

The field was slowed one last time at lap 70 for a Mike Stanton spin in turn two, which gave Warner the chance he needed to make one last attempt at Marcuccilli for the lead.

However, as the field came back to green for the final five laps it was clear that Marcuccilli would not be denied in his bid for a second Sportsman Classic crown.

Warner held on for the second position while Barker made a great drive to best Ridley for third on the final lap of the event.

** – Schilling opted to start 31st in the Sportsman Classic, turning down the $300 prize.d