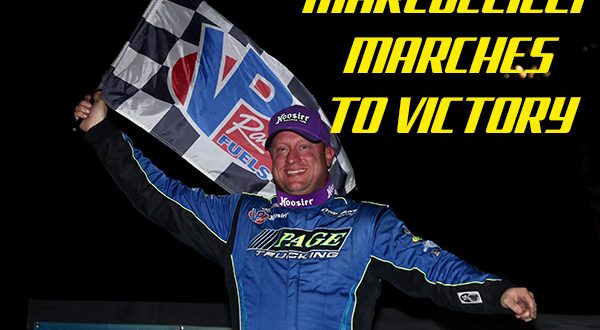 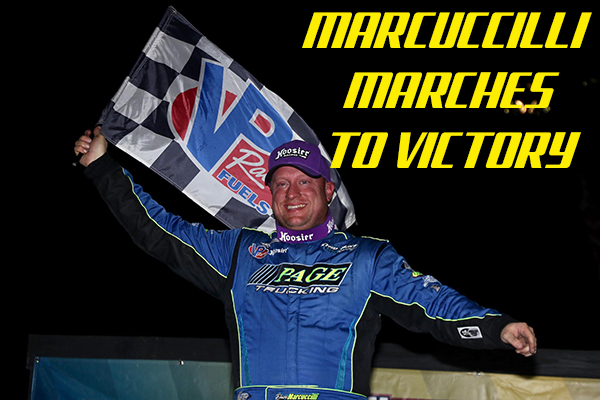 Entering Brewerton Speedway’s Hurricane 100 night of racing Dave Marcuccilli was 33 points behind Brad Rouse in the chase for the Mr. Dirt crown. With Marcuccilli winning his second series event in as many nights that gap might have been trimmed down just a bit more.

Standing alongside his car in the pits the winner said, “These two wins definitely allowed me to close in a lot on Brad (Rouse). Now we’ll just have to see how Oswego goes as we prepare for next weekend in Brockville.”

Marcuccilli overcame another stellar field of DIRTcar Sportsman and a track surface that had been pounded by rain for the past several days.

There were times where cars appeared to be out of the drivers’ control as it wasn’t uncommon to see three or four wheels high above the surface and to watch the drivers, who were along for the ride, fight to regain control when they hit earth once again.

Marcuccilli had a good night as he said, “We were quick time and quick in the heat. However drawing the pole probably won the race for me it was huge. On a track like tonight it is hard on everything, the driver and the car. You just have to worry about breaking something.”

On Wednesday night at Weedsport a rocker arm broke in the late going of the race and that meant for a quick motor change.

It all worked out at the D Shaped Dirt Demon as he outdistanced a very competitive 30-car field.

The eventual winner took the lead at the green with fourth place starter Jackson Gill ducking under current point runner up Kevin Root for second.

Rouse was on the charge from his sixth starting spot and went around Root on lap five for third.

Yellows popped up throughout the race and on the seventh lap Adam Pierson lost the handle of his car and spun in four.

On the ensuing restart Rouse powered low into one and ducked under Gill.

Yellow came out again as Kyle Sherlock hit the fourth turn wall inflicting heavy right side damage on his car.

The 13th lap proved to be critical as second place Rouse slipped a bit in turn one and suddenly Gill, Bob Henry Jr. and Root held second, third and fourth.

The only red flag of the event flew on lap 14 when Alan Fink did a nose stand in turn four. The car laid itself back down, but he had to slow it considerably to regain control. Suddenly, the jam up behind him saw Dorian Whadan, Tony Finch, Dan Ferguson and Brianna Ladoucer come together in a twisted mess.

When action resumed the remainder of the race saw Marcuccilli, Gill and Henry ride the rest of the way home in the top three positions.

Meanwhile, Zach Sobotka, who makes a habit of picking off critical spots in the closing stages of races, eked out the fifth spot capturing Rouse at the finish line.

Teenager Gill, who finished just six-tenths of a second behind the winner, was a bit disappointed with his runner up finish, but said, “It was a good run and I thought I had something for the M1 at the end, but I just couldn’t get around him on the last lap.”

Henry Jr., who has been racing quite a bit during the later part of the season as his exhaust business keeps him in the shop more than on the track, said, “I survived and I’m happy with third, but Dave and Jack were simply able to drive through the holes better than we did.”

So the satellite shows are over and the next stop for the Sportsmen will be qualifying for and eventually running the Chevy 75 on Sunday at the Oswego Speedway.