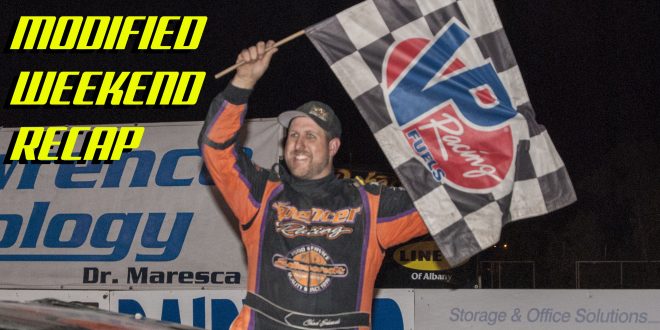 CONCORD, NC – September 24, 2018 – Mother Nature allowed the DIRTcar Sportsman Modifieds to get 5 out of 6 races in this past weekend September 21-22. Unfortunately, Le RPM was rained out on Friday, September 21. Brad Rouse wrapped up the Western Region Championship at Brighton Speedway’s two-day Applefest, but James M. Friesen kept him from running the table with a win in the second race of the weekend. The Central Region schedule concluded with Dave Constantino and Chad Edwards splitting the Fonda Speedway races in hard-fought victories. Kevin Root came away with the Central Region Championship bonus points going into the Fall Championship combined races. Finally, Alex LaJoie scooped up a victory at Autodrome Drummond to close out the Northern Region tour. Steve Pelletier came out on top of those standings.

Brighton Speedway PR has the story from Applefest: From the drop of the green flag Friday night, polesitter no. 88x Xavier Andrews was tough on the bottom while No. 33 Ryan Scott battled from outside for the first 7 laps of the thirty-five-lap feature. The pair went to war while no. 18R Brad Rouse fiercely hunted them down from his fourth starting position.  Rouse stole the lead on lap fifteen and never looked back as Cody McPherson shot into second trying to catch the no. 18R machine. Rouse parked it leaving McPherson to settle for second. Scott finished third, Andrews took home fourth and no. 8s Justin Sharp was fifth. 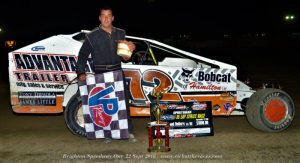 No. 17 Tristian Draper and no. 72 James Michael Friesen led the Sportsman field to green in Saturday’s 35-lap feature.  The pair went door to door for twelve thrilling laps until Friesen stomped on the gas and took the lead.  Unable to keep the pace, Draper dropped back to fifth as no. 44F Jonathan Ferguson and no. 7 Cody McPherson engaged with Friesen.  The no. 72 machine’s pilot held his own for the next 23 circuits and went on to win the feature.  McPherson was runner-up, Rouse scored third, Ferguson placed fourth and no. 20K Kyle Inman was fifth. (Brighton Speedway PR) 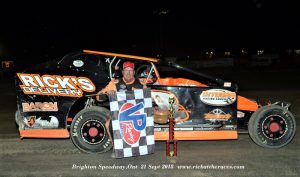 Alex Lajoie was ecstatic in the winner circle: ‘’The feeling is incredible, the car was perfect tonight, and being able to win a series race on top of it, it feels great!’’ said Lajoie. ‘’The track was rough, we found a good line and here we are’’ added Lajoie.

At the green flag Frederic Gamache took the lead in the 50-lap event over Eric Lefebvre and Shane Pecore. Gamache had a good start leading the way as caution was out on lap 7.

On the following green, Gamache in front with Lefebvre and Alex Lajoie grabbing third, Pecore in fourth. Yellow lights were back as Steven Lajoie stopped in the front stretch on lap twelve.

Gamache had company in front on the green as Alex Lajoie took first place on lap fifteen with Shane Pecore back in third.  Lajoie had a good run in first with Gamache in second with Pecore and Junior Mailhot in battle for third with twenty laps in the books.

The feature had picked up a good rhythm as Sebastien Fournier spun in front of the grandstands with twenty laps to go. This brought the field back together.

When the green lights were lit up again, Lajoie quickly pulled away as Gamache and Mailhot battled for second. A good fight between Cornwall Motor Speedway regulars happened with fifteen laps to go as Adam Rozon cracked the top 5 for the first time.

The final portion of the race was going well with Lajoie leading the way as Brianna Ladouceur stopped in the backstretch with 4 laps to go. Lajoie led the final laps to capture a first DIRTcar Sportsman Modified tour race in 2018 over Junior Mailhot and Fred Gamache. 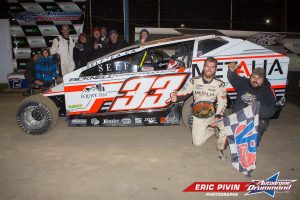 David Schilling got out to an early lead in the fifty-lap race on the historic Fonda Speedway. Schilling maintained his lead through a restart on lap seventeen after the track was blocked by a multi-car chain reaction pile-up in turn 2. Leader Schilling lead past the halfway point and on lap thirty-one he began working his way through lapped traffic. Unfortunately for Schilling, Dave Constantino closed in and on lap thirty-eight made the winning pass for the lead. Constantino was cruising to Victory Lane when the caution flag came out with just two laps to go. With the green, white, checkered flag finish looming, Constantino and company tightened their belts and prepared for a 2-lap dash. Constantino proved too strong the competition and drove away to win night 1 of Thunder Along the Mohawk weekend. 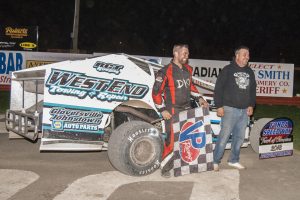 On night 2 Chad Edwards won a late-night/early morning thirty-lap thriller. Multiple lead changes highlighted an exciting race with Zach Sobotka leading the early stages. Sobotka lead until lap seventeen when the previous night’s race-winner Dave Constantino took his turn at the front of the pack. Eventually Sobotka’s motor let go and his race was done. With just 6 laps to go Chad Edwards stole the lead on the restart and never looked back. In Victory Lane Edwards said, “I gotta thank Tom and Sharon my car owners and all my sponsors. I gotta thank the crew, we came early to set the car up.”

The next race and the first of the Fall Championship is this weekend, September 28-29 at Fulton Speedway as part of their Outlaw 200 weekend. Heat races will take place on Friday night while the Last Chance Showdowns and Feature will be on Saturday.