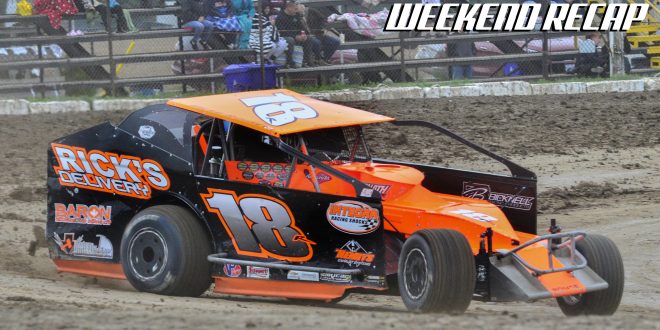 CONCORD, NC – September 10, 2018 – Three out of four DIRTcar Sportsman Modified Tour races were able to run this weekend as Humberstone Speedway was unfortunately rained out on Sunday, September 9. Friday, September 7 had both the Western Region and the Central Region tours in action. Brad Rouse bested the thirty-car field at Ransomville Speedway while Bob Henry Jr. won his first Tour race of the year at Can-Am Speedway. Then on Saturday, September 8, Brad Rouse took the trip to Victory Lane again for back-to-back wins, this time at Merrittville Speedway. The Western Region race at Humberstone Speedway will not be rescheduled.

At Ransomville Speedway, Ryan Ferri and Brad Rouse shared the front row for race number one of the DIRTcar Sportsman Modified Western Region. Rouse lead at the start, as Ransomville track champion Brett Senek moved into second on lap two. Cameron Tuttle battled with Ferri for third on lap six, as Rouse and Senek pulled away. The first yellow flag of the event came out on lap six as David Fingerlow hit the front stretch wall and ended in the moat. On the restart, Rouse and Senek would pull away from Cameron Tuttle, as Derek Wagner and James Henry raced in the top five.

David Fingerlow came to a stop in turn one to bring out the race’s second caution on lap 14. On the restart, The Lockport Laser Andrew Smith started 15th on the grid and by lap 15, worked into the top five as he battled Derek Wagner for fourth place. Derek Wagner would take the lead from Rouse on lap 18 as he went to the outside to pass both Senek and Rouse. James Michael Friesen made his way up to the top 10 after starting in 28th position the grid. Rouse would regain the lead on lap 23 and Senek took back the runner-up position.

The lead trio of Rouse, Senek, and Smith pulled away from Wagner and Kyle Inman, who raced in the top five for the first time on lap 25 after starting 13th on the grid. Inman passed Wagner to take over fourth on lap 34, and at the same time, Senek and Smith jousted for second place. Rouse pulled away from Senek to score his second straight DIRTcar Sportsman Modified tour race win at the Big R.

On Saturday, September 8, the DIRTcar Sportsman Modifieds of the Western Region took the show across the border to Merritville Speedway. Brad Rouse made it two-for-two and seized his second checkered in two days. Rounding out the top 5 were James Michael Friesen, Brent Begelo, Cody McPherson, and Justin Sharp.

Each region only has a few races left on the schedule before the Fall Championship begins. On Friday, September 14, the Central Region DIRTcar Sportsman Modifieds will join the Super DIRTcar Series Big-Block Modifieds at Brewerton Speedway for the Duel at the Demon 50. The Northern Region invades Mohawk International Speedway on Saturday, September 15 for the Pete Mitchell Memorial 100. Finally, the Western Region closes out the tour with a two-day show at Brighton Speedway on September 21 and 22.