The 2009 DIRTcar Racing Northeast season brings with it the addition of two new tracks to the fold as Albany-Saratoga (NY) Speedway and Devil’s Bowl (VT) Speedway will present a special series of events for DIRTcar Sportsman Modifieds.

“The Sportsman class has really exploded over the past few seasons and reaching some new markets will be great for further growth in the future,” remarked Reed, who estimated nearly 20 tracks are slated to sanction DIRTcar Sportsman races in ’09. The newest additions bring the total count to 35 tracks since a rule book was first outlined for the class in 1987. “This is a win-win situation for everyone involved as it fuels even more participation in this popular entry-level division for years to come.”

2009 marks the third year weekly programs at Albany-Saratoga and Devil’s Bowl will include the ‘Budget Sportsman’ division although DIRTcar rules and use of Hoosier Tires will be in place for the first time at both tracks during the upcoming campaign.

“We introduced the crate motor program for our Pro Stocks about four years before we carried it over to the Sportsman in 2007 and its been a savior both times,” noted Richards, 45, who handles day-to-day operations at A-S and carries out the role of Competition Director on race night. Brother Jerry Richards manages Devil’s Bowl while sister Sharon serves as Secretary/Teasurer at both facilities throughout the year.

“We’ve had some tough economic times yet the hometown grassroots racing always manages to survive. Short track racing truly offers a ‘bang for the buck’ and on the local level continues to be one of the best entertainment values indoors or out,” Richards said.

A long-standing Friday night facility, Albany-Saratoga will host a majority of the DIRTcar Sportsman shows on Saturday. Only a handful will be run at A-S on Friday and at Devil’s Bowl on Sunday, the track’s traditional race night.

“We needed to expand to Saturday since there was no room to add any divisions on our Friday card,” added Richards, who will run a ‘blended’ Sportsman class every Friday with the DIRTcar Sportsman class saved primarily for Saturday night activity. “Hopefully, this will lure more teams to compete. Some of our drivers have gone to Syracuse and really enjoyed the experience. Now they’ll have a chance to run for the Mr. DIRT title which should be enough incentive to attract a few outsiders to run more regularly around here.”

The races scheduled at both Albany-Saratoga and Devil’s Bowl will be used to determine a combined track points champion with the 2009 DIRTcar titlist collecting a $1,000 top prize. In addition, all drivers holding a valid DIRTcar license will be eligible for DIRTcar Northeast Regional Championship point fund awards at the end of the season based on their best feature race finishes.

For additional information, please contact DIRTcar NE Competition Director Cory Reed at the Weedsport office (315/834-6606) during normal business hours, or log into the DIRTcar homepage at www.dirtcar.com to find out more about the entire circuit. Bruce Richards can be reached daily at 518/857-0761, and in the meantime be sure to check out www.cvra.com for a complete schedule of DIRTcar Sportsman events at Albany-Saratoga and Devil’s Bowl as dates are finalized in the coming weeks. 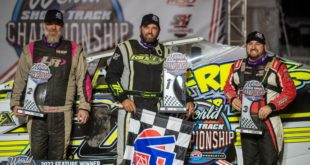 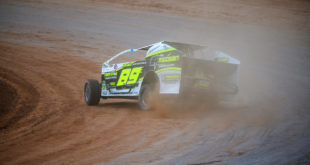