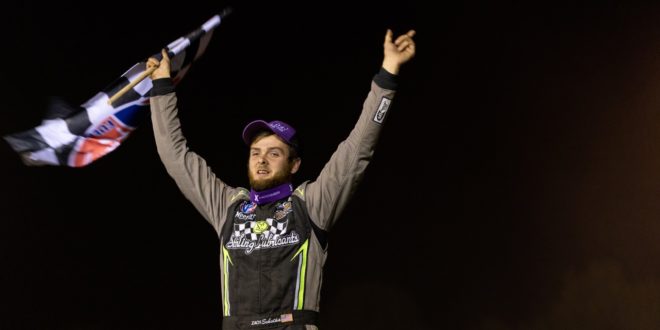 In the span of one year, Zach Sobotka went from winning multiple Features at Brewerton Speedway and clinching the track championship, to fighting tooth-and-nail to get to Victory Lane just once. That “once” came Wednesday night, in one of the most prestigious DIRTcar Sportsman Modified races on the Series schedule – The Hurricane Harvey 30.

Sobotka, the defending NAPA Auto Parts Super DIRT Week champion of the division from Parish, NY, had yet to win a Feature at the track after competing in all 16 weekly events this year, but ended the dry spell after climbing from ninth on the starting grid to the lead in 10 laps and holding on for the win.

What was the difference-maker Wednesday night? A little extra tweaking on their new ride.

What a time for a big win it was, coming right into the thick of Super DIRT Week, where Sobotka will defend his title against the strongest field of cars he’ll meet all year. Pair that with the checkered flag he captured last Saturday at Fulton Speedway, and he’s got one sizable momentum train rolling into the biggest weekend of the year.

Right from the drop of the green, Sobotka showed an extreme hunger for position, passing each of the eight cars in front of him in less than 10 complete laps around the 1/3-mile oval. He said lane choice was key in making that number of passes so quickly.

“Everyone was trying to go to the middle or the top because they saw all the brown coming out of the corner, but there was nothing really getting into the corner,” Sobotka said. “I pretty much just picked the lane nobody was in.”

Sobotka sealed the deal on a Lap 9 restart, favoring the elevated speed and momentum on the high side to make the move around leader Cedric Gauvreau. From there, it was Sobotka’s race to lose. He held strong on each of the remaining restarts, never allowing any driver to get too close to make a pass.

“When I got behind Cedric – he’s a tough car to pass – he was more to the bottom and going up into the middle,” Sobotka said.  “So I figured the only way I was going to get around him was on top.”

Though Sobotka got him for the lead early, Gauvreau still had work ahead of him in holding off a hungry Ryan Dolbear in the early going. In the final green-flag stretch, it was Cody Manitta breathing down his neck and looking to the inside for a late-race pass, but Gauvreau held strong through the checkers.

“[Sobotka] surprised me coming up on the top,” Gauvreau said. “He did a good job tonight and it was a good comeback for us from last night.

“Two more laps and I think I would’ve had something for him.”

The DIRTcar Sportsman Modified Series is next in action at the 50th Super DIRT Week at Oswego Speedway, starting with their Qualifying and Heat Race night on Friday, Oct. 7. Last Chance Showdowns and the Chevy Performance 75 will complete the program on Sunday, Oct. 9.

Tickets are available online at SuperDIRTWeek.com, or at the gate on race day. If you can’t be there in person, stream all the action live on DIRTVision.