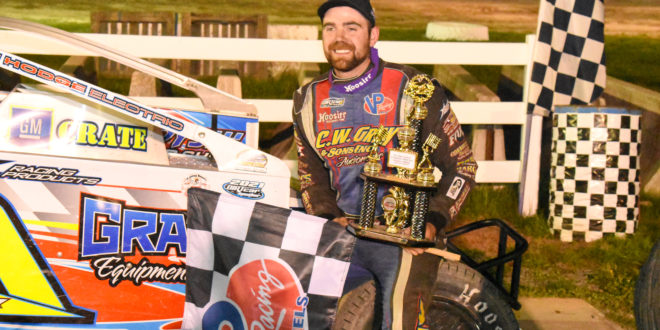 BRADFORD, VT – Hometown hero Jason Gray drove to the win from his sixth-place starting position in the historic first DIRTcar Sportsman Modified Series East Region Feature at Bear Ridge Speedway. David Boisclair and Jordan Fornwalt fought hard for the final two steps on the podium over the course of the 42-lap race.

Gray, driver of the #00 from East Thetford, VT, used his experience at Bear Ridge — and a lot of patience — to outdrive the other 23 hungry DIRTcar Sportsman Modified drivers.

“Last week, I came from 18th to second in a 35-lap Feature so it’s a matter of thinking about how the race will play out,” Gray said. “The first lap doesn’t pay. The 12th lap doesn’t pay. The only lap that matters is the one that has a checkered flag waving. That’s why you gotta set it up for the long run. In a 42-lap feature we are going to have some green flag runs.” 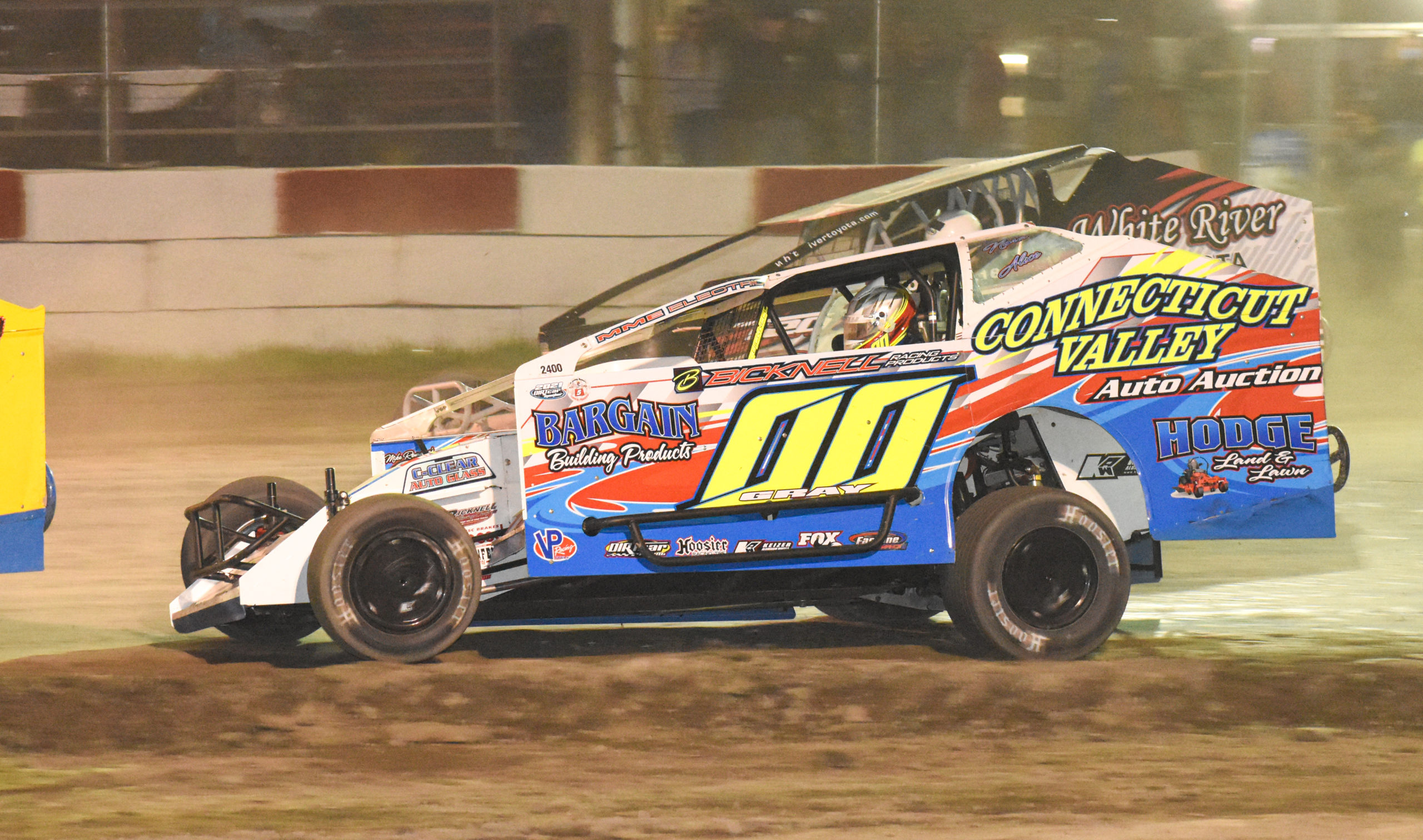 After starting sixth, Gray was determined not to lose any ground to the leaders and made sure he stayed in striking distance while conserving his equipment. On lap 21, the #00 pounced on then leader David Boisclair. As eventual runner-up Boisclair looked to hold the low line behind a lapped car, Gray saw the top side and motored by through Turns 1 and 2 for the lead. Boisclair fought back but Gray worked more lapped traffic to his advantage and created a gap.

“It’s our home track so we definitely had a bit of an advantage on those guys,” noted Gray. “Boisclair is a good racer. He drove tough. We have some really good guys here too though. Lots of competition tonight.”

While the Series invaders took to the slick surface well, Gray knew how the track would develop over the course of the race. Top-running Series drivers all agreed they wished they’d known how the top would come and when. 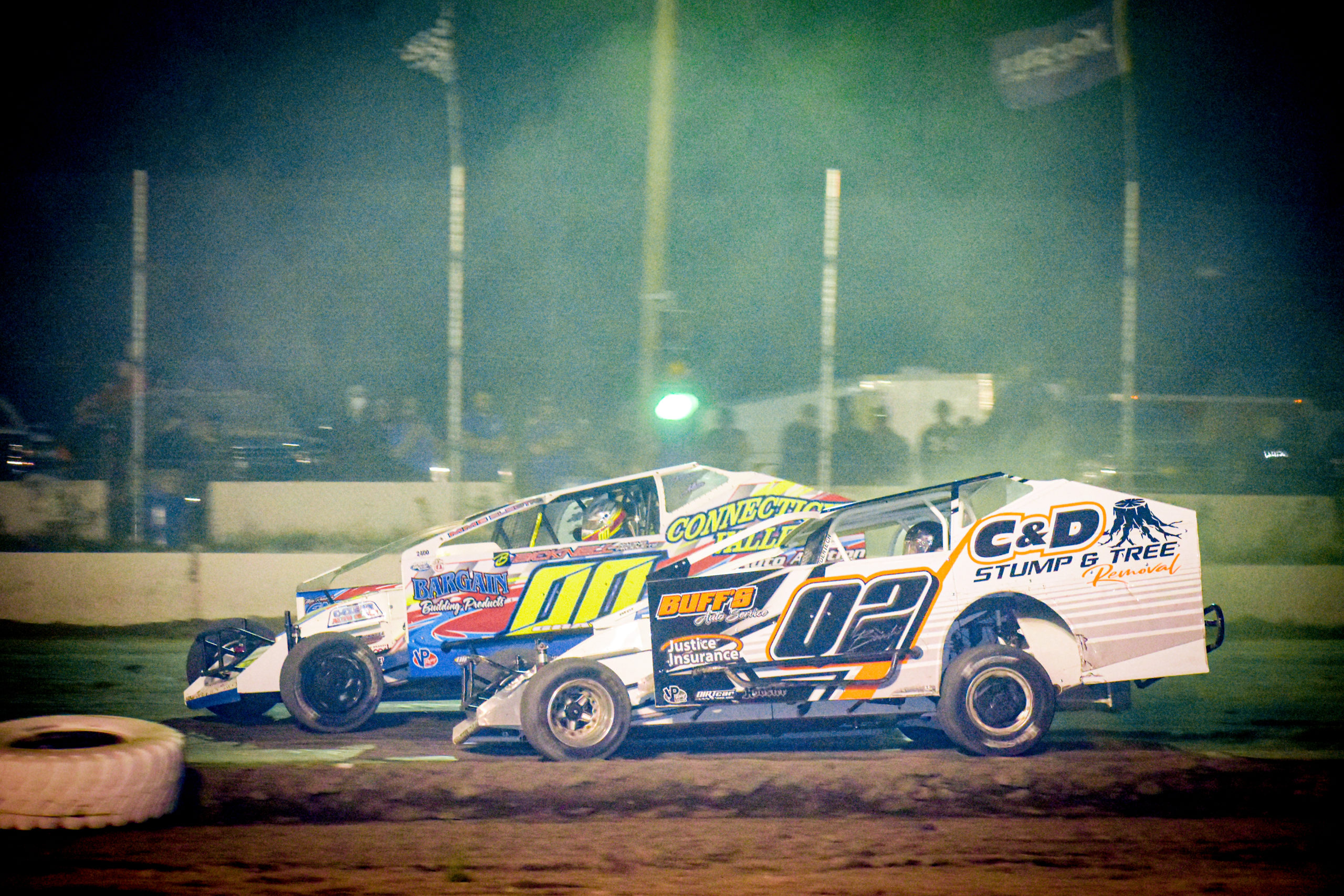 “You gotta be able to run the top here no matter what,” Gray said. “If you can’t run the top, it’s tough going. It’s a hard racetrack. There’s no moisture. It doesn’t stick. I like It. That’s what we’ve grown up with. It’s kind of a ritual for me.”

Runner-up Boisclair started the Feature on the inside of Row 2, and things turned interesting for the #02 right off the bat. Pole-sitter DJ Robinson spun the tires coming out of Turn 2 onto the backstretch causing the top 3 to go 3-wide into Turn 3 at the end of the backstretch.

“On the initial start the guy on the pole [DJ Robinson] left the door open,” Boisclair said. “I went through and he came down, unfortunately, and took himself out.” 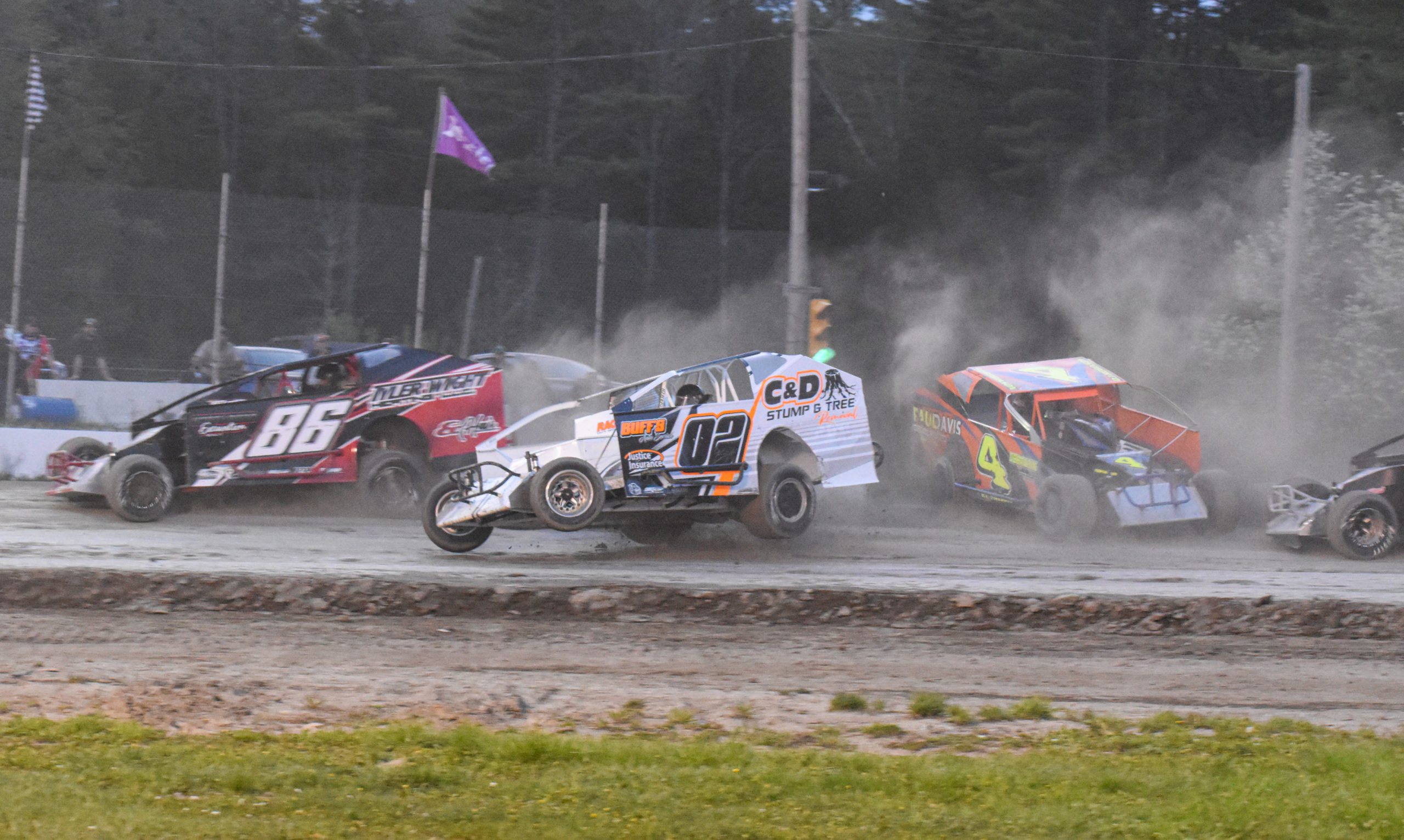 Robinson’s luck did not improve as he sat stricken on the speedway while the entire field surged past. He pulled off after completing only 7 laps and scored 24th. It was a heartbreak for the local hero.

Boisclair on the other hand was able to keep his #02 at the pointy end of the field throughout the Feature before settling for second.

“Not bad for the first time here,” he said. “It’s pretty fun and slick. I just wish I had known there was a top to run here a little sooner than later when Gray got by me. Shout out to him. He ran an awesome race.”

Boisclair is just getting started. He has a full schedule ahead of him in 2021.

“I race weekly at Albany-Saratoga Speedway and Airborne Speedway, where I won last week,” he said. “I finished second in the first Series race at Airborne and we’re going to follow the whole tour.”

Jordan Fornwalt started fifth and was a part of the non-stop action in the top 5 for the entire 42 laps. His podium finish is a career milestone, but certainly not his last as the driver keeps improving.

“This is definitely one of the biggest stages that I’ve had success on,” Fornwalt said. “This is now my best finish in a Series race after my fourth at Airborne [May 1]. This tops that and hopefully, we can continue climbing up the ladder.” 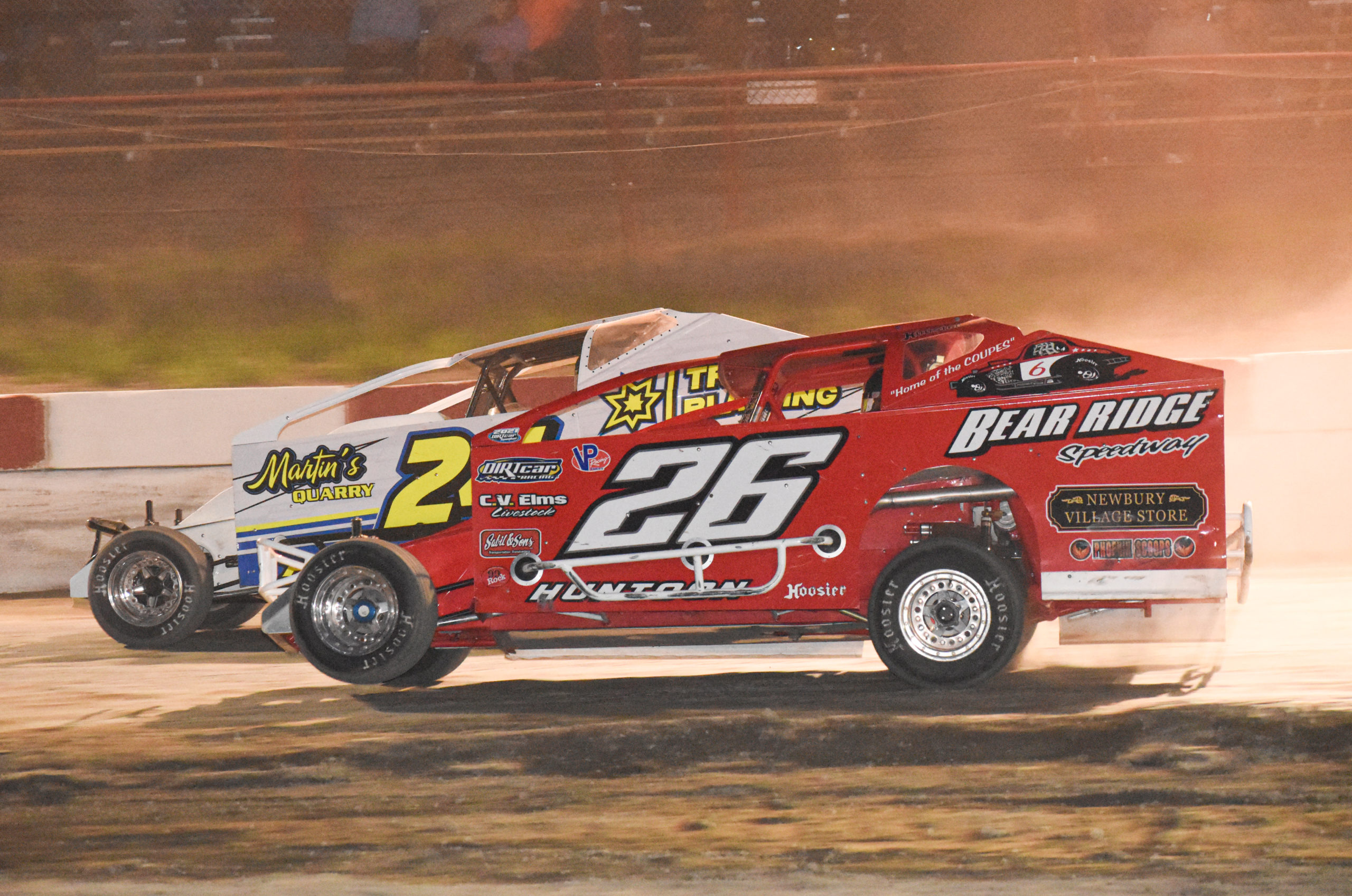 Fornwalt was another driver to find the high side late.

“Once we were able to get some green flag laps in, I was able to work the top in Turns 3 and 4,” he noted. “I made good ground on cars and I ran the bottom in one and two for a while because there was grip left down there. I knew the top was going to come into it because everyone was stacked up on the bottom. I kept trying stuff every lap and once I found that grip on the top of three and four I was good for a podium.”

After suffering a steering failure while leading his Heat Race, Justin Buff drove up through the field to finish fifth from his 23rd starting. The East Region points runner worked through some difficult traffic and was able to avoid incidents on his way to a top 5 finish. The plus-18 advancement was enough to keep him in the conversation as a favorite to win the region. 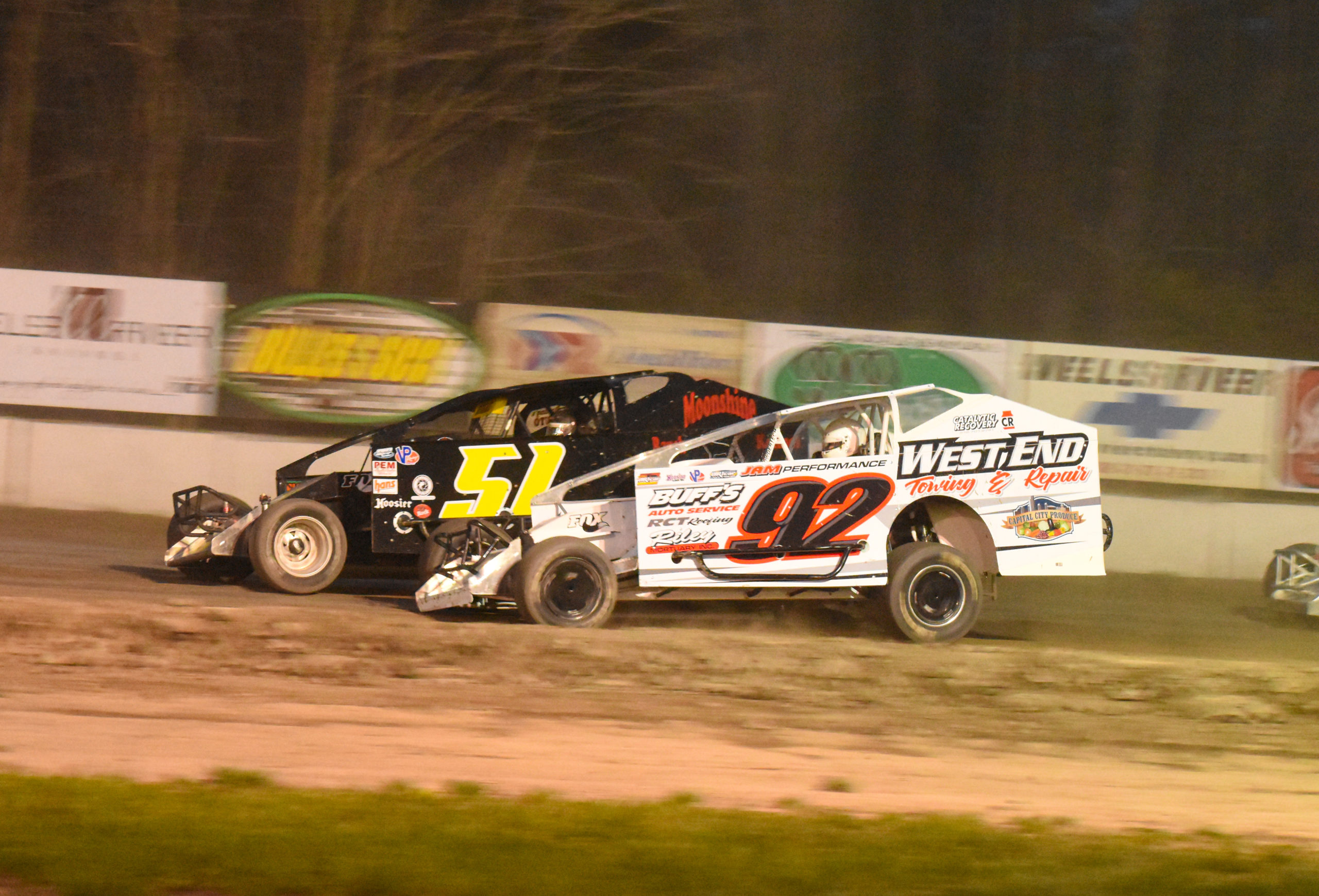 Ryan Avery suffered race-ending damage to his car but he was randomly chosen as the winner of a free Hoosier Racing Tire.

Next up on the DIRTcar Sportsman Modified Series East Region schedule is Glen Ridge Motorsports Park on Sunday, July 27. Be sure to bookmark DIRTcar.com and follow on Facebook and Twitter for news, features, photos, and more.